Lightfoot, de Blasio Impose Heavy Restrictions Due to COVID-19 Ahead of Thanksgiving

Lightfoot, de Blasio Impose Heavy Restrictions Due to COVID-19 Ahead of Thanksgiving 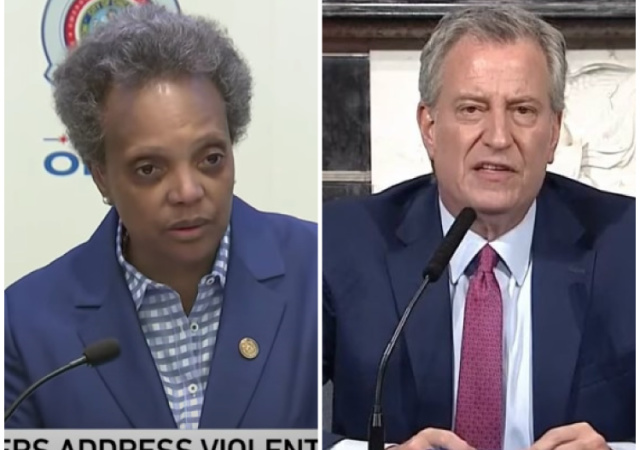 Two of America’s greatest mayors are doing everything they can to restrict joy and happiness during this wonderful season.

This is the year everyone should take Thanksgiving seriously after all that 2020 has thrown at us. But, of course, some people want to put a damper on the giving and thankful season.

Lightfoot and other Chicago officials issued a new stay-at-home and told Chicagoans to cancel Thanksgiving:

Beginning on Monday, November 16, 2020, the Mayor of the City of Chicago, Lori E. Lightfoot, as well as the Commissioner of Health for the City of Chicago, Dr. Allison Arwady, advise all residents of Chicago to stay at home in response to the rapid rise of COVID-19 cases and hospitalizations in the city. Residents are advised to only leave home to go to work or school, or for essential needs such as seeking medical care, going to the grocery store or pharmacy, picking up food, or receiving deliveries.

Additionally, residents are strongly advised to:

This advisory shall remain in place for 30 days or until such time as the Commissioner of Health determines a change to the guidance is appropriate.

It’s not mandatory, but come on. We all know it is. You know Gov. J.B. Pritzker is going to follow in her footsteps soon.

Illinois saw “12,702 new confirmed and probable cases” of the coronavirus on Thursday. That’s a new record for the state with 12.67 million people.

Lightfoot tried to guilt-trip people by saying that Chicago could lose 1,000 people by the end of the year and if that “doesn’t grab you by the throat as it did me when I started seeing that modeling, then there’s little we’re going to do to move you.”

Lightfoot claimed the rise in cases comes from “homes and private venues, with the friends and family” who we trust the most.

Also, Lightfoot is a hypocrite like most politicians. Last week, Lightfoot took to the streets, waded into crowds, and spoke to them without a mask.

This will no doubt cause more pain among private businesses. A survey of 400 people found “88% of restaurants, bars and nightlife establishments could not pay full rent in October.”

How about this 10-person limit in private households? At least Chicago dropped its six-person max limit because there are a lot of Catholics in Chicago and the outlying areas.

Granted, Catholic families aren’t that big nowadays, but I see quite a few families with many children at Mass.

We all know de Blasio and Cuomo love to go after Jews! The New York metro area has the largest Jewish population outside of Israel. The Orthodox community has grown a lot due to higher birthrates.

So do these limits apply to families as well? Put aside the fact that Catholics and Jews are known to have many kids. There are families who have three, four, or five kids without any connection to religion. They get married and have kids of their own. No visiting?

But go ahead and celebrate Joe Biden and protest police brutality.

The Residents of Chicago and New York voted for these restrictions with their vociferous rejection of President Donald J. Trump. They should enjoy.

Of course, we have no idea of how many dead, comatose or ineligible people voted for the restrictions in these cities.

The Flu Pandemic of 1968-1969 supposedly took over a million lives. Record keep today is not first rate. It was even worse 50 years ago. Despite the virulence of that flu, life continued as normal.

The Flu Pandemic of 1918 putatively took 20 to 50 million lives, (if estimates are to be believed). There were some restrictions, but World War I went on as scheduled.

Yet until now, life continued on.

Now the Biden Putsch (elected with the aid of dead voters) wants to shut down this Nation. A Nation whose dead citizens cast their ballots cannot long endure.

I hear the rent in New Dork is getting cheap.

Thanks to Mayor De Blasio we have learned something new and amazing. The virus knows how to tell time.

How about we follow the Constitution of the United States and I will follow my religious obligations without asking the government if they approve? BTW, did I mention that we are very well armed in my family? Oh, and we bought ammo while it was available, just in case you wondered.

Lightfoot is ghetto stupid. How will they enforce this?

Don’t think the Stasi informer wannbes don’t live here. As sickening as it is to think about in this country, there are plenty of neighbors ready to call the police on you if they count too many people showing up at your home.

Now that you mention it,, if I kinda squint… it does look like a one finger salute..

Families in NY and IL should just state that they are having Biden Victory Celebrations or BLM protests on November 26th. That way they can have as many people over as they want and masks are optional.

“Two of America’s greatest mayors are doing everything they can to restrict joy . . .”

Did you really mean to write that?

How about, “The mayors of two of America’s largest cities?”

Or, “two mayors that grate”?

And so it progresses, with, of course, good intentions.

Correct me if I’m wrong but I was under the impression that anyone who had the means and methods to do so abandoned NYC shortly after the pandemic declaration and that there is practically nobody left in the city and nobody willing to return any time soon. So who in the hell are these “regulations’ aimed at that De Blasio has published.

And as for Mayor Beetlejuice and Chicago? She can’t even get the violence in the city under control. I can’t see how she expects to enforce any of these idiotic rules over the Christmas season.

Correct me if I’m wrong but I was under the impression that anyone who had the means and methods to do so abandoned NYC shortly after the pandemic declaration and that there is practically nobody left in the city and nobody willing to return any time soon.

You’re wrong. That’s only true of some fancy neighborhoods in Manhattan, where everyone has a place in the Hamptons or somewhere like that.

They’re including “probable” cases in the counts now? Garbage in, garbage out, or rather garbage in, totalitarian power out.

I want to see video of the testing centers. I don’t for a minute believe that 10,000+ people took covid tests in a single day in Chicago.

I know plenty of households that consist of more than 10 people.

Catholic families may be smaller now than they used to be, on average, but religious Jewish ones are not. A lot of Catholics, including quite serious ones, just ignore canon law on contraception while continuing to identify as good Catholics in every other respect; a lot also use the church-approved rhythm method. Meanwhile the trend among observant Jews over the last few decades is people have either been getting more serious about their observance or else dropping out completely, so the average level of observance among those who remain in the community has grown. Also improvements in medical science have helped a lot of people who in earlier times had difficulty having children. That translates into a bigger average family size rather than a smaller one.

(Jewish law does not approve of the rhythm method, since it doesn’t approve of voluntary celibacy or abstinence. The consensus of authorities on Jewish law is that contraception is allowed for medical reasons, including mental health, but not for economic or social ones.)

I think these orders are great, a lot of hateful white liberals are letting their Thanksgiving get cancelled. Smart people will still get together with their families. No doubt these tyrants will be targeting Christmas, too.