Joy Reid, Adam Schiff Think Any Congressional Investigation Into a Biden Admin Would be ‘Obstruction’

Joy Reid, Adam Schiff Think Any Congressional Investigation Into a Biden Admin Would be ‘Obstruction’

Adam Schiff is a sniveling weasel. 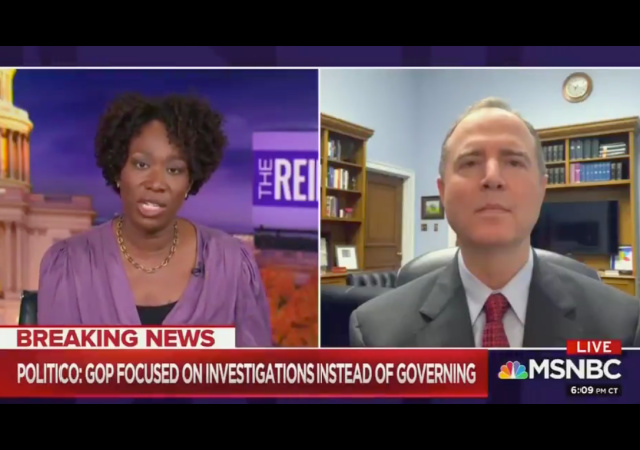 Rep. Adam Schiff (D-CA), the man who spent the last four years going after supposed collusion between Russia and President Donald Trump, is concerned that Republicans would spend too much time “investigating rather than legislating” during a Biden administration.

This is so freaking cute!

Video: Amazing stuff as MSNBC's Joy Reid and Adam Schiff say Republicans investigating a Biden administration would not only be obstruction, but a degradation of our democracy and waste of the people's time. pic.twitter.com/PvodYznI1G

Stevens was a fiery Republican who railed against slavery; think pro-life Republicans in the modern era. Schiff is a partisan Democrat who represents the amoral interests of Hollywood elites.

“Is this what we’re going to have to sit through for the next four years?” Reid asked. “Republicans just doing investigations and refusing to legislate?”

Schiff said he shared Reid’s concerns about Republicans spending their time investigating rather than legislating, which is rich coming from the Democrats’ lead-impeachment manager.

“I do expect in the new Congress that yes, they’ll continue to try to go after Joe Biden and delegitimize Joe Biden,” Schiff said.

It seems that Adam Schiff’s intellectual capacity is is about the same as Joy Reid.

I don’t think that they have any reason to be concerned. It’s not like the Republicans in Congress actually DO anything. That would require principles and intestinal fortitude, something sorely lacking in the majority of GOP legislators.

Actually, the R’s do a lot Anonamom, they work very hard to further the interests of the marxists just as they are doing today as they ignore a stolen election.

Stealing the election for president means America is dead as a country. The United States are no better than the Soviet Union.

We have multiple Pravda’s, the latest name “FOX”…

“Adam Schiff is a sniveling weasel”

The choice of words I would use are not suitable for this blog.

this degradation toward sniveling weasels is uncalled for.

I have always referred to Adam Schiff as a “slimy ass hamster”.

“Sniveling weasel” is a step up.

Actually, slimy ass is a recognized disease in hamsters. Most hamsters who contract it don’t survive 48 hours — dare we hope this on Schiff?

He has done deals with Russia and Ukraine. He’s doing exactly what th is little pencil neck said Trump did.

a complete 180 degree turn in the blink of an eye. I’m surprised they didn’t get whiplash.

Obviously Schiff’s neck doesn’t contain any bones or nerves, so his could be twisted more than 360 degrees with no damage.

Transpose the word Dimocrat for Republican and you’ll have an accurate description of the last four years. Cognitive dissonance is easy for Bobblehead Schiff.
.

I once worked for a Democrat Congressman who ended up in prison. Things will not end well for Adam Schiff.

He spent years around Ed Buck (no relation), he has probably felt that before, may liked it as well.

At Least we no have an impeachable offence

Unlike the claiming that an investigation into corruption is impeachable.

What is “impeachable”? Gerald Ford famously said that a “high crime or misdemeanor” means whatever the House wants it to mean.

But if “impeachable” means more than simply “the House wants to impeach”, then it’s an open question whether offenses committed before the person’s term in office qualify.

In 2019, it seemed like it meant “the House wants to impeach.” They identified the man, they just couldn’t find a crime no matter how hard they looked. The Dems won’t lay a hand on Cheating Joe…… and the Repubs if they every take back the house will be too timid.

probably wont matter , even if impeached ( highly unlikely – since the senate requires 2/3) Harris will pardon

Unless the media picks up on the corruption, (again highly unlikely) there will never be 16 or 17 ethical democrat senators.

Harris as VP makes Biden unimpeachable. Why would the Senate remove Biden from office only to make Harris the president? It would have to be some serious offense for the Senate to contemplate such action.

They’re both puppets and impeaching either of them wouldn’t change the powers behind the scene who would really be making all the policy decisions.

(The puppeteers aren’t exactly invisible, however. They’re like those Japanese puppeteers who dress all in black and who the audience pretends not to notice.)

But it’s all moot if Trump can prove the election was fraudulent. So let’s not get ahead of ourselves!

Yes, but in 2019 the pretended “offense” they impeached Trump for did happen within his term. They didn’t impeach him for something that happened earlier.

Let’s not call it “obstruction.” Let’s just call it “the resistance,” or maybe just a “coup.” Schiff shouldn’t have any problem with any of those terms.

To call Adam Schiff a sniveling weasel would be an insult…to weasals. Unlike Adam Schiff, weasels occupy discernible and useful niches in the ecology.

I wonder if Adam Schiff really got re-elected, or if the Dominion software was just friendly to him.

This would be funny if it weren’t so sad. Without double standards, dems would have no standards at all.

This is still likely to be moot.

This BS is all a sideshow. The only story which is of any importance, at the moment, is the election fraud. The entire political scene in the US turns on whether the Trump Campaign can identify remove enough illegal votes to swing PA, MI, WI and NV back to him. If he can do that, and the results are certified, then the ball is back in the Dem’s court. As a side benefit, if enough Democrat down ballot votes are eliminated, at the same time, we might see the GA runoffs eliminated as well.

The problem that we face, is the number of intelligent people, who identify as being conservative and libertarian, who seemingly accept the premises put for by the MSM propaganda organs. Ofc. Chauvin did not kill George Floyd, he died of a drug overdose while in police custody. And, Joe Biden is not even the presumptive President-elect. There is a mountain of evidence supporting the assumption that several swing states went to Biden due to massive, obvious vote fraud.

Rep. Adam Schiff (D-CA), the man who spent the last four years going after supposed collusion between Russia and President Donald Trump, is concerned that Republicans would spend too much time “investigating rather than legislating” during a Biden administration.

Reminds me of my undergraduate days studying epistemology and seeing how coherence theories of truth can suffer from lack of contact with reality.

In January 2017 I was watch C-span and anything cyber security because it was an area I was interested in. I ran across this video any discovered Adam Schiff for the first time. I was reading a book called “We Are Anonymous – Inside the Hacker World of LulzSec. Anonymous, and the Global Cyber Insurgency by Parmy Olson.

I new immediately that Schiff was putting up Red Herrings about the Russians to fit his agenda.

After re-watching this, I notice that Schiff was confronted by a guy named Ray McGovern at the end. Would love to know who and where this guy is.

Watch the whole thing, or just the confrontation by Ray McGovern at 1:15

Historically, one of the jobs of a hangman was to calculate a proper drop to avoid decapitation.

Wonder what that drop would be for a pencil neck like Adam Schiff.

Well, I wouldn’t be worried about decapitation. In Shitt’s case that would be a feature.

Joy/Schiff… now there’s the real brain-trust of the democRAT party!