Gun Sales Continue to Climb, Especially Among Black Men and Women in 2020

Gun Sales Continue to Climb, Especially Among Black Men and Women in 2020

GOOD. The 2nd Amendment is for everyone. Americans should embrace their natural right to bear arms. 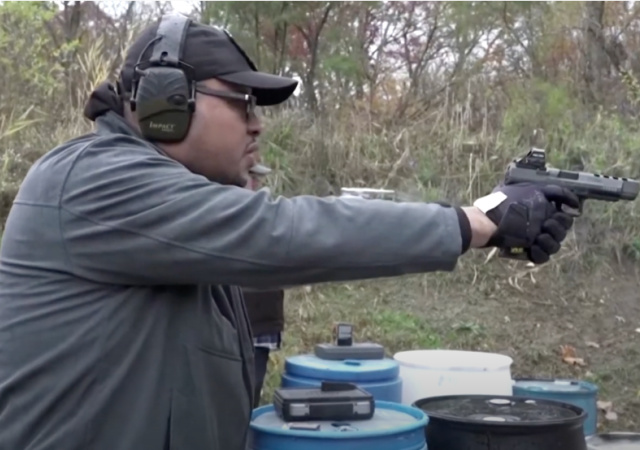 A report from the National Shooting Sports Foundation found an increase in gun ownership among black Americans in the first half of 2020.

The ownership “increased by 58.2%,” mainly because of the pandemic and the death of George Floyd in late May. 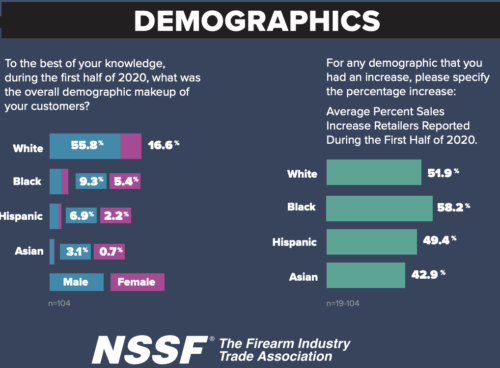 Wanda James, co-owner of the new 1770 Armory and Gun Club in Denver, said the state of American politics is driving gun ownership among Black Americans.

“We are definitely embracing our 2nd Amendment,” James told Fox News. “A lot of that is due to not feeling safe, and wanting to protect ourselves and our family in the same way that every other American is given that right, and I believe that Black America has decided to start embracing that.”

“The current climate dictates that we bear arms,” Tillman said. “It is essential that we are able to protect ourselves, those we love and our belongings.”

1770 Armory and Gun Club was named after the year the American Revolution started and the year Crispus Attucks, a Black man who is widely considered the first American to die in the revolution, was killed.

There is a high demand among Black communities, especially in Aurora, where residents are legally acquiring concealed weapons. This motivated Derone Armstrong, a pastor of Leake Memorial Church in Aurora, to spearhead the formation of a local chapter of the Black Gun Owners Association.

“When the pandemic hit, it escalated. People became fearful because they didn’t know what was going to happen with the hoarding,” Armstrong said.

“And then with the rise of racism and white supremacy, people want to protect themselves.”

Blacks who long held anti-gun views changed their minds due to the climate. Beverly, who lives in Aurora, said that “you’ve got to protect your family.”

Denver does not allow live-fire ranges:

Denver prohibits a live-fire gun range, so shooters use an infrared simulator, which also cuts down the expenses of members. Computer cartridges shaped like bullets are inserted into a gun’s chamber, and those cartridges send signals to a computer that records the shots fired at targets mounted on the walls, according to The Denver Post. 1170 however has partnerships at outdoor ranges in other counties for its members.

Yet defund the police joe biden who also promised to implement draconian gun control laws and essentially rescind the 2nd Amendment received more votes than berrack hussein obama? The sh!+ the democrats expect us to believe is beyond infuriating. I hope every single one who participated in voter fraud gets a very long prison sentence.

The Fictional News Networks are still claiming the George Floyd overdose death was a murder.

And claiming that Thugvon is saint.

“It is essential that we are able to protect ourselves, those we love and our belongings.”

Sounds like somebody’s been watching too much TV. Protecting your belongings with firearms sounds like a grand plan to get the state of Colorado to provide a nice rent-free apartment for a few years.

Food for thought, that. Look at it as some common ground for two distinct groups of the voting public.

A group with a track record of voting 90% for the other team, generally, that shares “our” thoughts on self-reliance and seem to be seeing the dangers presented by the radical left’s “defund police”, no-penalties world should not be ignored. This is the kind of stuff that can start lasting alliances.

With the current politics wanting all transgressions by black criminals forgiven, how will these politicos deal with filing a criminal case against a black man who uses force to defend his garage full of tools and motorcycles? Again, food for thought.

Of course not. Much of the country doesn’t live in Texas. This weird idea puts people in prison elsewhere.

Prior to the rise of Progressivism, during the Great Depression, it was legal in most areas of the country to use deadly force to protect property. Property represents a portion of a person’s life. Most people expend a portion of their lifetime working to gain property. It is not something which people are entitled to, but for which they expend their life’s blood to attain. So, philosophically, why would a person not have a right to use deadly force to protect his lawfully gained property?

Now, today, there are a number of what are essentially property crimes which states allow one to use deadly force to thwart. These include such crimes as robbery and burglary. Neither necessarily includes a physical attack on another human being. However, it is still lawful self defense to use deadly force to prevent the taking of property in these criminal offenses. Know the law and how it applies in the jurisdiction in which you are at present.

Correction. Robbery is the taking of property from a person using force or threat of force. That force can be armed force or simply physical force (unarmed). It is a violent crime; ask any robbery victim.

Read what you just wrote. Robbery is the taking of PROPERTY. While argument can be made of a physical threat against the holder of that property, the object of the threat is secure the release of property, not merely to harm the person holding the property. The same is true of burglary. Neither is the same as assault or battery, where physical fore is directed toward the person with the intent of physically harming him. And, interesting footnote. In most jurisdictions, neither deadly force nor the threatened use of deadly force, is necessary for a victim of robbery or burglary to be authorized to use deadly force in response. However, the use of deadly force or credible threat of the imminent use of deadly force is necessary to use deadly force to defend against assault or battery.

“While argument can be made of a physical threat against the holder of that property, the object of the threat is secure the release of property, not merely to harm the person holding the property.”
If you’re lucky, and he doesn’t kill or injure you afterwards anyway.
Once force is used or the threat of force is made by the assailant, it doesn’t matter what his objective is, you are 100% justified in preserving your life and bodily integrity.
No “merely” about it.

A burglar breaks into a home. He does not know if it is occupied or not. In most cases, the burglar will not attempt to enter an occupied dwelling. But, the resident can still utilize deadly force against the intruder even if no threat is made against his person. Your argument is that it is assumed that he intends to harm the resident, who he may not even know is there. Then we have assault and battery. Most states do not allow the use, or even threatened use, of deadly force, in self defense, except in response to deadly force. Why is it assumed that a robber or burglar, even one not armed with a deadly weapon, is assumed to use deadly force against the victim, to secure property, but not when actually physically attacking a person to inflict bodily harm? Where is the logic in that?

Logic and common sense abandoned the realm of lawmaking decades ago.

Mac45 – Actually, according to a quick check, it appears that 27 states have a “stand your ground” law. In Texas, you are allowed to use deadly force in the circumstances you describe, as long as you didn’t provoke the attack.

Mac, you are not following this. Its the force in a robbery, be it actually used or just threatened that differentiates it from simple theft. Using a weapon to instill the fear of harm if the victim does not comply only increases the penalty, in some states. The level of fear that gives allowance for use of deadly force is not restricted to fear of death but also includes great bodily harm (or injury, wording differs). If you point a gun at someone or brandish a knife to cause them to “give it up” you have given that victim legal standing to shoot and kill you if he is so equipped.

Once someone decides to enter a home he is asking to be shot… As stated above most states recognize the sanctity of the home and the right of the occupant to be safe there.

Robbery has an implied threat if you fail to cooperate and you don’t know if the robber will kill you even if you cooperate. Better that every honest citizen be armed and kill robbers if they have the opportunity.

Prior to the rise of Progressivism, during the Great Depression, it was legal in most areas of the country to use deadly force to protect property. Property represents a portion of a person’s life.

Obviously. I couldn’t agree more. So what? What you or I think of it is inconsequential. Shoot somebody for stealing your stuff in the US and you’ll have a hard time staying out of prison.

Internet fora are just chock full of bad advice. I recall reading some earnest claims that blasting someone wandering around on your front porch has something to do with “defense”—to a certain muddled way of thinking, trespassing is equivalent to violent battery. That particular case ended up in a prison term for the guy “defending” his property. Nothing on the internet should be considered competent legal advice.

Again the left is over their skies. Seems to me like cowering is a specialty for the left.

In the state of Texas, you can shoot a trespasser on your property from sunset to sunrise. They don’t have to be in the house.

In PA we can’t do anything because we don’t have any ammo.

Just go shopping in another state and bring your ammo home.

And then with the rise of racism and white supremacy

Uh-huh, that’s the problem, for sure.