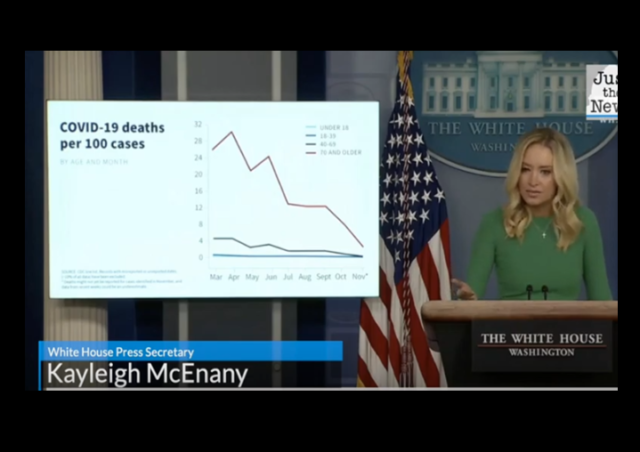 There have been amazing new developments in the battle against the Wuhan coronavirus.

As Mary noted, both Moderna and Pfizer have created vaccines found to be over 90% effective in testing during late stage trials.

But there is even more: University of Arizona Health Sciences researchers recently completed a study and found immunity persists for at least several months after being infected with SARS-CoV-2, the virus that causes COVID-19.

“We clearly see high-quality antibodies still being produced five to seven months after SARS-CoV-2 infection,” said Deepta Bhattacharya, Ph.D., associate professor, UArizona College of Medicine—Tucson, Department of Immunobiology. “Many concerns have been expressed about immunity against COVID-19 not lasting. We used this study to investigate that question and found immunity is stable for at least five months.”

When a virus first infects cells, the immune system deploys short-lived plasma cells that produce antibodies to immediately fight the virus. Those antibodies appear in blood tests within 14 days of infection.

Even better: A soon-to-be release study suggests that such immunity can last for years.

Eight months after infection, most people who have recovered still have enough immune cells to fend off the virus and prevent illness, the new data shows. A slow rate of decline in the short term suggests, happily, that these cells may persist in the body for a very, very long time to come.

…“That amount of memory would likely prevent the vast majority of people from getting hospitalized disease, severe disease, for many years,” said Shane Crotty, a virologist at the La Jolla Institute of Immunology who co-led the new study.

The findings are likely to come as a relief to experts worried that immunity to the virus might be short-lived, and that vaccines might have to be administered repeatedly to keep the pandemic under control.

And the research squares with another recent finding: that survivors of SARS, caused by another coronavirus, still carry certain important immune cells 17 years after recovering.

Finally, the new treatments that have been developed rapidly in response to the pandemic crisis have reportedly led to a significant drop in mortality rates of elderly patients who become infected with the virus.

White House spokeswoman Kayleigh McEnany presented a fatality chart showing deaths over time per hundred cases for various age ranges. According to the data from the Centers for Disease Control and Prevention, deaths have come down for every age group, especially for those over age 70 — the age range marked with a red line.

“That red line is a testament to what this President has done,” McEnany said Friday afternoon at a press conference. “Therapeutics, monoclonal antibodies — that is a recent one — that reduces hospitalization in high-risk seniors with moderate to mild COVID by 70 percent. That’s American ingenuity rising to the occasion, and President Trump oversaw all of this.”

A closer look at the chart: 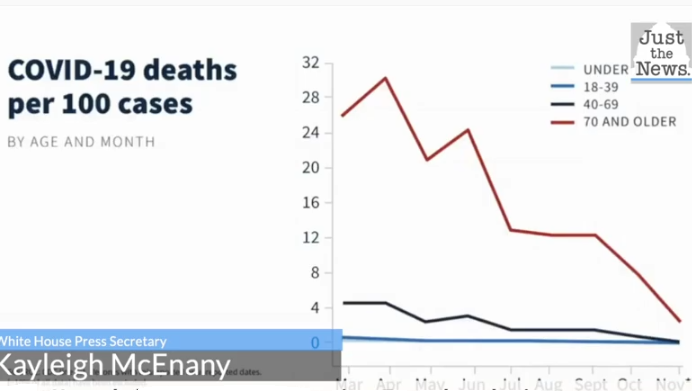 And here is McEnany’s review of the data at the press conference.

Finally, I would be remiss if I didn’t share this gem from that conference, in which McEnany tells CNN’s Kaitlin Collins, “I don’t call on activists,” at the conclusion of her press briefing.

If you are diagnosed with C19 and recover, do you change your behavior? Are you less careful about masking, distancing, washing hands, etc under the assumption that you won’t get sick again?

But, you are still at risk for re-infection since the virus is still out there within the community. This time, your body handles the infection and continues to produce antibodies which increases the immune system. Just an idea….

notamemberofanyorganizedpolicital in reply to Liz. | November 21, 2020 at 8:26 pm

This is just like the common cold, which of course is a Coronavirus.

Barry Soetoro in reply to notamemberofanyorganizedpolicital. | November 22, 2020 at 3:01 pm

Not all common cold viruses are coronaviruses.

Tiny rhinoviruses cause most common colds.

Of course if you’ve had it you’re immune for a while, if not indefinitely. Why should the dreaded covid be different than any other coronavirus, or any other virus for that matter?

Because Trump, of course.

notamemberofanyorganizedpolicital in reply to zennyfan. | November 21, 2020 at 8:30 pm

….and for all the Communist Chinese colluding with DEMs time and money on this SUPER FAKE FRAUD.

LET THE TRILLION DOLLAR LAWSUITS AGAINST ALL DEMOCRATS BEGIN – CRIMINAL AND CIVIL.

The answer depends on its evolution.

You’re really not immune once you’ve had it, there are at least 6 strains of it and you can still get the other strains apparently.

There have been documented cases of people getting 1 strain, recovering, and then catching another strain of it.

But then, that brings up the magical vaccine that’s been developed. We have a new flu vaccine EVERY YEAR. Last years sgot had vaccines for 4 strains, IIRC, this year’s was for 3. ANd they’re guessing which strains will be out there. Is the magic vaccine a multi-strain vaccine? Or is it simply effective against all of the current strains? If the latter- then getting any one of the original 6 ought protect you from the other 5.

But- if getting any one of the original 6 doesn’t protect you against the other 5- then masking is going to go on forever if we don’t start hanging dictators masquerading as governors.

Remember, it will continue to mutate, so having it does not mean that you cannot be infected by a mutated strain. It does mean your acquired immunity to other strains will likely make the infection less severe.

“referring to CNN reporter as an “activist”…

In all seriousness, she was being generous.

But “zealot” would have been too on-the-nose.

If only immunity could be contagious. Oh wait — that happens by having as many people as possible contract and survive the virus! The virus itself propagates the immunity!!

You’d think there would be a word or phrase to describe this mechanism. I’ll have to think on this.

Thanks, I’ll pass. I think I’ll go the vaccine route.

That death rate only applies to reported cases. The overwhelming majority never develop symptoms so are never reported.

And- a significant number of of people seem to have preexisting T-cell immunity to the dreaded covid.

Imagine what would have occurred if the Democrats had been in charge. Obamacare web site redux.

We’d have a lot more people dead, and the press would be heaping praise on him for his magnificent ability to handle the situation.

And if you don’t believe that immediately, I have one word for you: Cuomo.

They’d do what Obama did

Halt testing and their media would stop reporting the deaths

This article highlights another of the scare tactics used to both frighten people into submission and to get the bad orange man.
To paraphrase, “many concerns have been expressed that immunity does not last”…what a crock from all the followers of “science” on the left. They have zero scientific evidence that human immunity to Covid-19 reacts any differently than to any other virus. Human hosts get sick from the virus and most recover and our God given immune systems create antibodies to ward off future infections. This is how it has been and always will be. But, seeking political advantage by making a virus with a 99%+ survival rate into a mechanism of political leverage and public control the left spread such lies to fearful masses.
Such people are the true evil ones.

notamemberofanyorganizedpolicital in reply to empiricallyobvious. | November 21, 2020 at 8:35 pm

Surely there is a name associated with the a$$hole that ends each briefing shouting loaded questions that he knows will not be answered. I don’t know why anybody is so kind as to refrain from identifying him by name.

Oh yes, there is a name but asshole works just fine and is far more inclusive 🙂

notamemberofanyorganizedpolicital in reply to Valerie. | November 21, 2020 at 8:33 pm

Dusty Pitts in reply to notamemberofanyorganizedpolicital. | November 21, 2020 at 10:46 pm

This is another attempt to redefine the COVID-19 virus. What we know about the virus is that the human body produces antibodies to individual strains of the virus, which appear to be viable for as long as eight months after infection. We know this because the virus has been studied for the last eight months. Beyond that, everything is a guess. Now, historical trends, with regard to corona viruses is that they do not produce long term antibody production in the human body. The generally touted reason for that is because these viruses are prone to easy and rapid mutation. However, there is also ample evidence to suggest that the human body simply does not view thee particular viruses as a long term health threat. It require periodic exposure to the virus to jump start the immune system.

However, we must not lose sight of the fact that the COVID-19 biography was crafted to justify extreme social reactions to combat it. It was sold as an apocalyptic disease which required socially destructive responses to combat. It was being used to restructure society. Well, in the US, we have a potential incoming Progressive Establishment President. And, society can not be kept locked down for the next four years. Neither can the Trump administration be allowed to claim victory for allowing it to reopen through the rapid introduction of an effective vaccine. So, we see the foundation for long term immunity being laid, which will allow society to reopen due to natural causes.

COVID-19 is NOT a public health concern. It is a wholly fabricated political narrative. Once you realize that, then the wildly divergent claims for the virus make so much more sense.