I’m tired of saying this, but it’s still true: All animals are equal, but some animals are more equal than others. 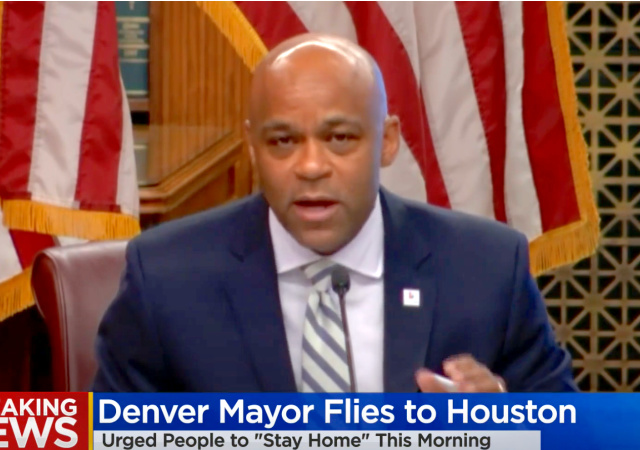 Denver Mayor Michael Hancock regurgitated the talking points from so many other Democratic mayors and governors: Stay home for Thanksgiving!

Like so many of those mayors and governors, Hancock is a hypocrite.

Hancock flew “to Houston Wednesday to visit his daughter in Mississippi, and that his wife is already there.”

The mand had the nerve to tweet this 30 minutes before his flight. 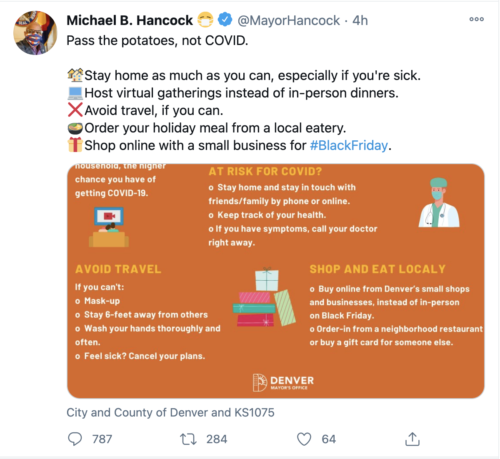 Did you read it? “Host virtual gatherings instead of in-person dinners.” “Stay home as much as you can, especially if you’re sick.”

Not only did Hancock choose not to stay home, but he is having Thanksgiving with family.

Hancock and his wife could not have a virtual gathering with their daughter!?

Hancock’s office actually tried to spin this in his favor. Instead, it came off that he knows better than his constituents. You know, the little people (emphasis mine):

“As he has shared, the Mayor is not hosting his traditional large family dinner this year, but instead traveling alone to join his wife and daughter where the three of them will celebrate Thanksgiving at her residence instead of having them travel back to Denver,” a statement from the mayor’s spokesperson reads. “Upon return, he will follow all necessary health and safety guidance and quarantine.”

According to an email obtained by 9NEWS, Hancock’s assistant said the mayor would be out of office from Wednesday to Friday.

But but but Hancock and his family canceled their “traditional gathering” with extended family!

Because we plebians cannot take the proper precautions upon our return from visiting families?!

Unconfirmed reports: I’m a noble, you plebs can’t expect the same rule to apply to me.

notamemberofanyorganizedpolicital in reply to 2smartforlibs. | November 25, 2020 at 10:47 pm

Phil Scott is nominally a “Republican” — but he voted for Joe Biden, and was happy to declare it.

So a NeverTrump liberal “Republican” is now acting as the Stasi enforcement agent for the leftist surveillance state.

How surprising! Who could have predicted such an unexpected betrayal?!!?!

The Healer in Chief, Barack Obama: Hispanics Who Voted for Trump Are Racists

Enough of these assholes telling us anything anymore.

Trust in our government and our political party is destroyed. DONE.

All we have left is the Trump family in top leadership.

Thou shalt not be skeptical of mortal gods. Let us bray. #InStorkWeTrust

I don’t think the IRS ever had any integrity.

Nor the FBI or the CIA.

To be fair, no intel agency is in the integrity business.

I like to think the FBI by and large still has integrity, but just as in the days of J. Edgar, the FBI in and around DC is not the same as the rank and file in the field offices.

Let them wear masks. That said, the mask is off. How green? So green.

The lack of self awareness is off the charts.

Was he on a private jet? Surely a shaman of his stature would not have to endure travel among the unclean masses.

Well if he is a shaman then he wouldn’t be traveling by aircraft due to his commitment to fight ‘global warming’….

Unoffocial, totally unconfirmed word is that California Governor Newsom will be joining them for the celebration.

And their hair will be done by Nancy Pelosi’s preferred stylist, with plenty of opportunuities to snack on high-priced ice cream.

Will they watch Governor Pritzger’s daughter compete in a horse riding contest?

Sorry, but there will be no lasting political push back against the aforementioned a-holes. There will be some moderate caterwauling and possibly rending of garments, but it will all blow over in a week or so. Then, off to tyranny-as-usual for them.

How many times do they need to shove it in our faces before we realize the Unconstitutional COVID restrictions on our rights have nothing to do with safety and everything to do with control?

The Tree of Liberty is looking thirsty.

Interesting calculation. You can tell how many Americans have already had Covid19 by taking total deaths and dividing by the mortality rate.

100 million Americans have already had Covid19.

Matt == And you know the mortality rate how? Just making up numbers doesn’t help.

Somewhat off topic. Since the beginning of the ChiCom Flu infections, much of the information dribbled upon the citizens has been wrong and the “tables” used to predict trends have been corrected every few days, so the projections are wrong. The fool/tool that is the Denver Mayor notices this and figures today’s pronouncements are false as well.

San Antonio has a 10PM to 5AM curfew now until Nov 30.
Deutschland Uber Alles

You keep saying that my not wearing a mask is killing you.

It’s been months. How much longer will it take?

A republican mayor would be hounded out of office over something like this. Hancock, on the other hand, will get a pass and won’t be mentioned in more than one or two news cycles over his hypocritical actions.