“120 countries lined up for slots to raise questions” on “U.S. rights record.” 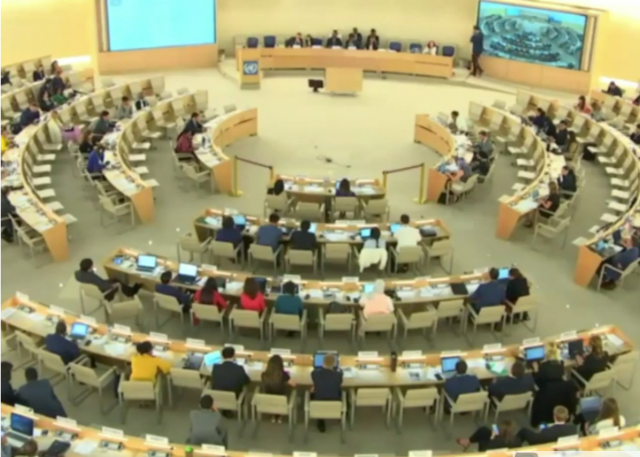 China, Iran, and a host of rogue regimes have once again used the United Nations Human Rights Council (UNHRC) to gang up on the United States.

Thanks to today's election of China, Russia, Cuba, Pakistan & Uzbekistan, that figure will rise to a staggering 60% beginning on January 1, 2021.

Communist China, which runs forced labor camps for millions of ethnic Uighur and Tibetan minorities, accused the U.S. of “racism” during the review.

The Iranian regime, the world’s biggest sponsor of terrorism that just last year murdered over a thousand pro-democracy protesters at home, joined China, Syria, Venezuela, and others to condemn the U.S. record on human rights at the UN forum in Geneva, Switzerland.

The Associated Press reported the bizarre proceeding, even by the UN standards, staged earlier this week:

The United States faced its first review in five years at the U.N.’s main human rights body on Monday. (…)

Regular U.S. critics like Iran, Syria, Venezuela, Russia and China questioned and scrutinized the United States’ record on rights as the Human Rights Council gave the U.S. its turn for a regular examination of every U.N. member state’s record on human rights known as the Universal Periodic Review. Allies, too, offered criticism and pointers — if more diplomatically.

Nearly 120 countries lined up for slots to raise questions in the 3 1/2-hour session that follows up on an August report about the U.S. rights record over the past several years — and what steps U.S. authorities are taking to improve it. (…)

“The United States has been, and always will be, a leader in transparent, rights-respecting governance,” U.S. Secretary of State Mike Pompeo said in a statement on Monday’s review. “We don’t simply discuss human rights in the United States; we cherish and defend them.”

"China wishes to recommend to the U.S.:
1. Root out systematic racism, address widespread police brutality and combat discrimination against African- and Asian-Americans….“ pic.twitter.com/q2AUSKPTWZ

The U.S. faced a similar review at the UN rights body back in 2015 during the Obama-Biden years. President Trump, however, ended the farce two years ago when he pulled the U.S. out of the organization dominated by left-wing dictatorships, Sharia-governed Islamic regimes, and failed third world states. The then-U.S. envoy to the UN, Nikki Haley, at the time of the withdrawal described the UNHRC as a “hypocritical” body which “makes a mockery of human rights.”

Under the sway of Muslim-majority countries and Communist regimes, the global body is particularly obsessed with Israel. In 2019, Israel was condemned five times by the body, which made up 25 percent of all resolutions of condemnation issued that year. Similar baseless anti-Israel resolutions have been passed at the UNHRC and other UN fora this year as well.

While the UN body has been busy targeting the U.S. and Israel, it has been silent on the biggest human rights abuser: Communist China. No resolutions have been passed on forced labor, mass deportations, and treatment of dissidents in Xinjiang, Tibet, and elsewhere in China.

“China then uses the information that the UN provides them, to harass human rights activists and their families – often accusing them of terrorism and worse,” Israel’s TV network i24New reported.

Wow, who would have thought the U.S. was so evil? Imagine my surprise when Cuba, China, Syria, Russia, et al, complained of human rights abuses in our country. I don’t know what to say?

One must applaud the UN’s determination to remain irrelevant.

It’s like having the devil admonish you for being bad.

When do we bulldoze the U.N.
and Hollywood?

Beijing Biden made it clear he agrees with every single thing stated there and even if we win in court we lost the popular vote.

Our government (which is more executive agencies than congress) also agrees with every single thing China had to say.

Is there reason for optimism? Republicans in state houses are letting the education system indoctrinate into leftism instead of educate so every red state will inevitably turn blue if nothing is done dramatically and quickly.

Why are we still in the UN? Throw them out, give the land back to the Rockefellers, and call it a day.

Those countries sound like they got the idea from BLM

I notice that none of them have the guts to propose expelling us for being sooooo bad.

Channeling my inner Br’er Rabbit.
Is that raycisss?

Okay, two can play that game. They expel the US from the UN. We expel the UN from the US as Grizzly suggested. Can anybody see any serious negative consequences from this?
.

notamemberofanyorganizedpolicital in reply to DSHornet. | November 12, 2020 at 4:25 pm

But hold ALL their peoples until they pay all the fines they would have paid if they were not Globalist Suck Ups.

They smell the blood in the water.

Figurative, maybe. What they really smell is the stench of a corrupt politician headed to the White House, one who has already shown he is willing to bend the law in order to profit himself. Starting a Biden term off with a blistering attack on US human rights (by the worst violators, but we’ll ignore that for now) will put whatever flunky Biden installs as ambassador on immediate defense, and pressure them to ‘do something’

Of course, the list of ‘somethings’ will be long and slanted hard Left: return to the Paris accord, lift all sanctions on Iran, move the US embassy in Israel back, billions of dollars sent to whatever front organizations they have set up, etc…