“One guy on a telephone call bragged he just bought a $400 watch for his mother thanks to the state.” 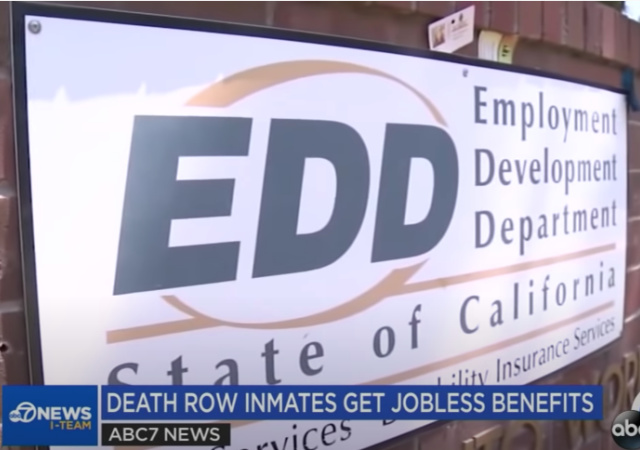 Attorneys described it as “the most significant fraud on taxpayer funds in California history.”

State and federal prosecutors investigated “fraud in the pandemic relief system administered by the state Employment Development Department [EDD].” For some reason, California does not have “a system that ‘cross matches’ prison and jail data with unemployment claims.”

From The Los Angeles Times:

Riverside Dist. Atty. Mike Hestrin said the scheme works typically by someone on the outside doing the paperwork. The payments usually go to an address outside of prison. Once the cash card is obtained, the person on the outside puts some of the funds into the inmate’s prison account, where it can be used to buy services and goods such as food and stamps.

“One guy on a telephone call bragged he just bought a $400 watch for his mother thanks to the state,” Hestrin said.

San Mateo County District Attorney Stephen Wagstaffe’s office discovered fraud months ago. The office filed charges against 22 people who allegedly applied “for benefits while incarcerated or helping an inmate to do so – felonies that could result in three years in prison.” Four have pleaded guilty.

Some claims used John Doe, John Adams, or “poopy britches” as names on the claims.

person “must be actively seeking work and be available to work” in order to collect unemployment benefits.

Prosecutors demanded Gov. Gavin Newsom do something since this fraud could have been prevented:

The prosecutors contend that the fraud is preventable with systems such as those used by other states that check inmate data against unemployment claims. They asked Newsom to step in to “turn off the spigot” of payments to incarcerated people, contending that EDD’s response to their investigations has been “slow to nonexistent,” according to Sacramento County Dist. Atty. Anne Marie Schubert, who helped form and lead a task force on the issue.

Newsom on Tuesday said the fraud was “absolutely unacceptable” and announced his own task force to aid district attorneys and coordinate California’s anti-fraud efforts, adding that the state has already started comparing inmate rolls to pandemic benefit claims.

“Earlier this year, I launched a strike team to expedite unemployment payments and to minimize abuse of the system,” Newsom said in a statement. “While we have made improvements, we need to do more.”

But..But this is a Newsom unemployment feature. Soon coming to all states.

NOT the Babylon Bee

Reminder to all Californians – the Recall Gavin 2020 campaign needs your signature!
https://recallgavin2020.com/

But the Government can be trusted, really it can.

You can’t make this stuff up. Unbelievable!

It’s probably not an accident, either.

I don’t believe for a second that this is “the most significant fraud on taxpayer funds in history.” I’m sure there are lots bigger frauds that just don’t get the same level of outrage from the media.

One of them is the concept of “death row” in California.

I have seen human cannons as a good way to return illegals, with their landing being hard enough that they would not want to repeat the experience, but rail launchers would be a great way dispose of habitual criminals, where the sudden stop upon reaching a suitable surface would end their misery and save the public from having to deal with them again.

Newsome will hide behind his ‘task force’ and ‘strike team’ until this issue has faded from public attention. Then two years from now, if he’s still governor, when his ‘task force’ releases its report and recommendations, he’ll issue some milk-toast statement asking the legislature to implement the recommendations and then blame the legislature when nothing happens, leaving him blameless.

Meanwhile, tens or hundreds of millions of taxpayer dollars will continue to be fraudulently paid to prison inmates.

Reason number 500 to make sure the blue states do not get one dime of US taxpayer bailout money.

A very simple low tech solution would be for unemployment benefits recipients to be required to report to a physical office to sign for and receive their benefit in cash.

Same for replacing EBT cards. Report in person, sign for and receive a food box and a small cash amount biweekly.

No more selling EBT cards for a cash discount as there won’t be any EBT cards. No more EBT fraud by stores.

Of course this would require a biweekly in person visit which would mean the recipients were stigmatized…..

They’d have to present identification to get their benefits, right? How can the same people for whom acquiring an id card to vote is an unreasonable demand be expected to get one to obtain government benefits?

Clearly someone incapable of achieving the low hanging fruit of obtaining a free or nearly free state ID has demonstrated they are incapable of functioning in society and must be institutionalized for their own protection. (Not Sarcasm)

That was to be a thumb up, the down vote is wrong; it was recorded in error when I went to touch reply.

My reply was to be that another way to stop this fraud would be to flag the obvious fraudulent claims when received. Those who process the obvious frauds are accessories to the fraud and should be called out – once, fired the second time. There is a deep seated moral rot in society today. It is everywhere from clerks who enable this sort of thing, USPS employees who knowingly mis-handle ballots to enable voter fraud, ‘volunteer’ ballot openers, vote counters and signature examiners, to the Gavin Newsoms, Peter Strzoks, James Comey’s, Adam Schiffs and Nancy Pelosies who perpetrate, condone and enable it – everywhere, in all walks of life in this country today.

No worries. As you point out there are lots of enabling actors. Limit the contact to the physical realm, no digitally disbursed ‘welfare’ and Unemployment benefits, required in person signing for the benefit at a physical location and from a clerk.

Now there is an easy audit trail. Each recipient has an assigned day and time for pick up. Of course any person with outstanding warrants could be taken into custody by local LEO or ICE or whomever while there.

I’m sure the prisons didn’t mind the influx of spending in the canteen. I’m also sure the prisons completely overlooked the increase and told any one that was curious to STFU and talk to their union rep.

Wonder if there was a “sudden” increase in prices??

Scams like this do not spontaneously. This was planned.

Scams like this do not continue without help. This had considerable help both outside and inside the prisons.

“Scams like this do not happen spontaneously. This was planned.”

It sounds like these inmates have much in common with the Biden syndicate.

Haha……….looks like those California state taxes gotta go up. AGAIN!

Prosecutors demanded Gov. Gavin Newsom do something since this fraud could have been prevented: