I guess schools, gyms, and places of worship do not matter. 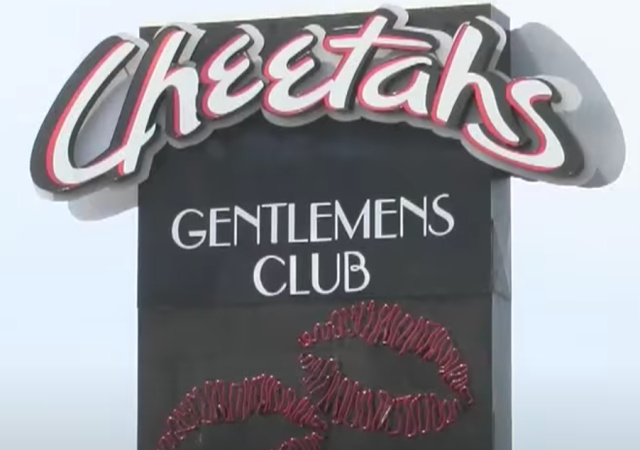 Shouldn’t that argument apply to places of worship as well?

Note: This decision is not final. The full hearing will happen at the end of the month, but it allows the strip clubs to temporarily open.

From The San Diego Union-Tribune:

Judge Joel R. Wohlfeil granted a request for a temporary injunction that stops “any government entity or law enforcement officer from enforcing the provisions of the cease-and-desist orders” filed against two establishments — Pacers Showgirls International and Cheetahs Gentlemen’s Club — provided both locations follow extensive measures designed to prevent the spread of the coronavirus on their premises.

A lawsuit that the clubs filed against the county in October alleges that the county’s public health orders, which prohibit live entertainment but that don’t specifically mention adult entertainment, violate the businesses’ constitutional rights of due process and equal protection under the law, arguing that other establishments, from restaurants to comedy clubs, have been allowed to host “considerable live entertainment.”

These clubs received a cease-and-desist letter from the county in mid-October.

A San Diego County spokesperson said at the time that these clubs “could operate like restaurants – with employees dressed however they want — as long as there was no dancing, DJing, singing or other forms of live entertainment.”

The clubs opened five weeks before they got the letter with the owners forming “a safe operation proposal that included 15-foot buffers between patrons and on-stage dancers, among other precautions.”

Religious-liberty advocates hope this case will push judges to rule in their favor:

Religious-liberty advocates said that the case could pave the way for lifting coronavirus restrictions against churches. Paul Jonna, special counsel for the Thomas More Society, which is representing churches challenging the restrictions, expressed confidence that this decision bodes well for the churches. If strip clubs are entitled to constitutional protections, then churches are as well, he told the Free Beacon.

“If you’re going to accept that argument that dancing nude is protected speech that’s so significant that it overcomes the government’s interest in regulating its citizens with COVID-19 orders, then obviously the divine worship of God, which is expressly mentioned in the First Amendment, should be held to a higher standard,” Jonna said.

I agree. Strip clubs and places of worship should be open to the public.

Girl got to strip…

Corrupt politicians and their cronies need their lapdancers. What else would they spend our embezzled tax dollars on?

Don’t worry. Private parties are covered by a different set of rules depending on who is in attendance.

There she was, clad only in a face mask…..

No to the Heavenly Father but yes to the heavenly bodies.

Anyone “who has made income from using their or other people’s sexuality to financially assist themselves” can apply, said Cat Hollis, founder of PDX Stripper Strike and Haymarket Pole Collective, which is administering the grant. Priority will be given to Black, Indigenous and transgender applicants, those with minor dependents living in the household and those experiencing homelessness.

even money for whores is race/gender based.

Can’t schools, churches and gyms as well as strip clubs be combined under one roof all at once? We are Americans after all, nothing we can’t do.

Reminds me of what I saw on a shirt once. “Alcohol, Tobacco, and Firearms should be a convenience store, not a government agency.”

Come on, pastors, step up to the challenge and twirl a tassel for Jesus.

Finally, some equal protection under the laws.

Want to bet that city/county/state officials now find a reason to pull these establishments Certificates of Occupancy, liquor licenses and/or any other required licenses/permissions they need in order to operate their “gentlemen’s clubs”? I wouldn’t put it past them to do it since they lost the “cease & desist” battle in court and people like this simply cannot abide losing.

Coumo pulled that stunt with several restuarants in NY

“Keep ’em stoned and fuc-ing” – that’s the left’s goal. Promiscuous stoners and pervs will vote us into slavery.

Look into this judge’s direct and indirect financial contacts: among them could be strip club owners.

Check out the superspreader soprano at 1:37
https://www.youtube.com/watch?v=H3v9unphfi0

I’m pretty sure Cheetahs is in ATL…did they franchise it? That would be a very altruistic investment… providing employment opportunities for those COEDs to complete their college education…

Wait a minute. Isn’t that PRECISELY what Gloria Steinem did?

“If you’re going to accept that argument that dancing nude is protected speech that’s so significant that it overcomes the government’s interest in regulating its citizens with COVID-19 orders, then obviously the divine worship of God, which is expressly mentioned in the First Amendment, should be held to a higher standard,” Jonna said.”

The most maddening part is that when you try to explain to Bizarros that they are living on the Bizarro World, Bizarros never believe you.

Quite a lot of Dem-controlled cities and states are deciding to start another hard-shutdown.
It’s sad for the small, family-owned businesses.
No income, perishable food going bad and no idea if/when the bosses will let you live again.

Here’s a post on NextDoor from today, you can “hear” the sadness in his message

Hello Neighbors. Unfortunately Santa Clara County is closing indoor businesses this Tuesday. We have the next 4 days to have a safe and responsible night out while playing your favorite game of pool, New York style pizza and a ice cold beer or beverage of your choice. Please come check us out and support your local family run business while we are allowed to operate. Thank you all

Churches don’t generate tax revenue. Strip clubs do. I doubt this is the reason for the judge’s decision.

That, or, the judge is bored and wants the clubs open again.