It’s not just the verbal flubs, it’s the bitterness that’s on display 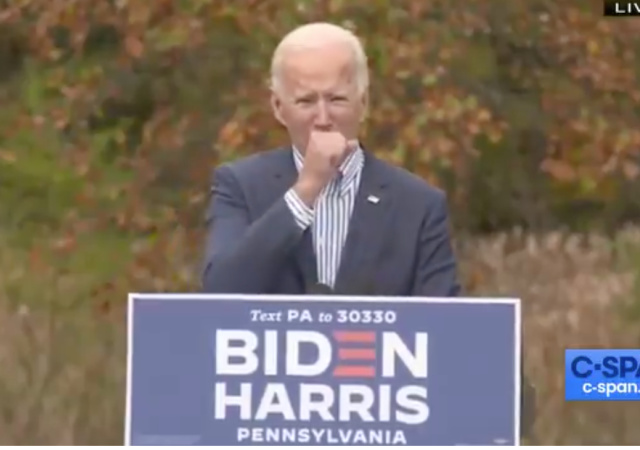 You all may have seen videos such as this one that are compilations of Joe Biden’s verbal and cognitive lapses. But something even more disturbing is revealed by parts of his speeches that are relatively coherent.

Those bloopers were taken from a recent speech Biden made in Luzerne County, Pennsylvania, which can be found in its official full-length version on Biden’s own YouTube account here. The errors and slurrings Biden made are all too real.

But what’s worse is the content of the speech itself. Lie after lie (doom-laden stuff about COVID and Trump, Trump called the military “losers”, Biden won’t ban fracking although he said many times that he would, Trump hasn’t delivered on any of his promises though he has) and simplistic and formulaic solutions delivered in a shouting monotone for the most part. For someone who bills himself as the nice guy in the race, this speech has a harsh animus.

I want to highlight two segments that weren’t on the blooper video because they’re not bloopers. But I think they’re extremely revealing about what makes Joe run and what has always made him run:  Envy and bitter anger.

And here’s another angry tirade:

At the beginning of many sentences in this speech, Biden also displays a repetitive vocal tic: “Look!” And it’s not the only repetitive phrase he uses. The whole speech has a robotic air, as though he’s memorized some time-worn phrases that he is reciting with what feels like the correct and appropriate affect but that’s somehow off.

Can this be what America wants? I guess we’ll find out – I was going to say “soon enough,” but of course there may be quite a post-Election Day delay before we know.

Hmm. Envy and bitter resentment are what drive Biden. So you’re saying his a leftist?

President Trump has been “building back better than Barack or Biden” for four years now.

Maybe Biden can plagiarize that.

Joe Biden is a nasty piece of jerk.

He used to be an egomaniac dimwit with an obvious inferiority complex. Now he’s a bitter dimwit heading quickly toward being a cognitive null set. Sun’s getting real low, Big Guy…

He is and always has been a 2nd rate politician – a party hack. In some dim recess of what is left of his mind he KNOWS this and that hidden self knowledge if fueling his anger and bitterness.

.
Everyone on TV seems to start comments with “Look,…”

A variation on That Guy at faculty meetings. Cordurouy oat with leather elbow patches, greying beard, and starts every sentend by gesturing with his pipe and saying “Actually…”

50 years ago, he’d have been driving a Peugeot.

Many dementia patients exhibit anger when speaking in more than just a few words or one word answers. Repeated questioning causes a similar response. It seems to be due to the frustration associated with maintaining coherence and fighting off cognitive fog.

I think it might be dementia coupled with him trying to mimic his mentor, Comrade Obama. I watched a few of his (Obama’s) appearances stumping for Joe and Obama was yelling at his audience, too. Then I remember that Obama yelled in most of his public appearances when he was in office. Both frauds and charlatans, one clearly unfit for office (and one possibly ineligible and I think some of that coverup is still alive today and probably influences some of the Democrat party’s own dementia).

Its common for alhemizers and dementa patients to exhibit anger n the later stage of the disease. Based on my experience iwth other dementia patients. slow joes dementia has not progressed to that point yet

Biden has never been thought of as being smart. A bully, yes. A liar, yes. A cheater who doesn’t care if he is caught, yes.

He is vile person. Obama picked him as insurance that he wouldn’t be impeached. Now we are supposed to vote for this slimy creature so he can step aside and let Kamala run the country.

He is an angry old man with nothing to give this country, yet will take whatever payouts he can get. No morals. No Brains. No Thanks.

He reads one sentence at a time and yells back at the teleprompter.

Too bad no one has hacked his teleprompter with a variation of Al Sharpton’s “resist we much”.

Does he want us to get off his lawn?

So does he think the chumps or the ugly are going to jump over and support him? The anger is obviously he’s figuring out the handers lied about his chances.

Or is he trying to reel back in some of those blue collar voters that are drifting Trump’s way?

Is he the politician who talked about his father bieing a mailman?

No, he’s the one who spoke of his da and his grandda goin’ down t’pit. Which they never did.

Biden reminds me of that other piece of treasonous garbage, Hillary Clinton: the choice of Biden to run is exposing the entire mafia of corruption headed by the democrat/rino cabal.

And like Hillary Clinton, the lame-brain choice of Biden and the disgusting Kamala Harris will bring the house of corruption down.

AG Barr won’t be of any help – ever. He’s part of it. First order of business if PDJT is re-elected: Send Barr packing, along with that criminal Wray.

And don’t think they’re not gunning for us (literally):

Yale Psychiatrist Suggests Middle America May Need To Be ‘Leveled’ Like Dresden to Stop Trump:
https://www.informationliberation.com/?id=61872&s=09

Remember: this psycho Lee doesn’t speak until she gets marching orders.

Even if PDJT wins, the civil war is just beginning.

What on earth makes you think Lee gets orders from anyone (other than the voices)?

As dementia takes hold, inhibitions fade. Simple question about Biden… happy drunk or mean drunk? Mean drunk is harbinger of mean dementia. His true nature… as if his political life didn’t show it already… is coming out. Dr. Jill probably knows this all too well.

I think it’s an act, one he’s done before and can still do from muscle memory in his current fragile state. Lunch-bucket Joe. But he’s so old it comes across as angry-old-man.

Also angry because he’s losing and is afraid of the legal consequences unless he can win and put a lid on the legal processes.

Who has “houses all over the world, you live very well” as Trump said in the last debate and Biden didn’t even try to dispute.

Of course they’re both very rich. Trump from inheritance followed by doing very well in business, Biden from corruption. One of those is a safe choice for President, and it isn’t Biden.

Another telling thing in this video is that this sounds like the most responsive crowd for him I’ve witnessed in all his non-events. All he is doing is raging at Trump and howling at the crowd, and that gets the savages honking and, I imagine, beating their chests, too. This is all these people have. Just like Biden, they have no ideas, no positive energy, no desire to be better. All they have is their rage which is now targeted at Trump and us.

The Trump rallies must drive them ape poop crazy. There is nothing these people hate more than seeing someone else enjoying himself.

The backdrop says “Luzerne County Mobilization Event” (don’t know what else the third word could be) so maybe it’s party faithful.

Biden reminds me of those old 1930’s newsreels of Hitler giving a speech. Fist pounding, yelling and nasty! Beware!

Tne very thing Trump is accused of. No evidence of it, just what is said. The ONLY resemblance I can see between a Trump rally, and Hitler’s, is the enthusiasm.

And Trump isn’t a frustrated artist.

And the enthusiasm at trump rallies is not forced/faked at risk of being arrested later for failing to show sufficient enthusiasm.

Dementia and meanness aside, Biden has always writhed, Janus-faced, in scum and slime and is thus a perennial DC sleaze.

Goofy Joey says he is six and tired of smart guys. A refreshing and rare note of honesty. Biden admits he is not smart, and knows it.

As for not going to any Ivy League school, from Harry Truman, Ike, and LBJ three out of four Presidents were not Ivy. Then math is hard.

He wasn’t known as the ‘dumbest man in the Senate’ for nothing. He knows he isn’t the smartest guy in the room hence the ‘Lunch Bucket Joe’ routine which he can’t pull off anymore.

He wasn’t known as the ‘dumbest man in the Senate’ for nothing. He knows he isn’t the smartest guy in the room hence the ‘Lunch Bucket Joe’ routine which he can’t pull off anymore.

He lies because no one ever calls him on it so the lies just build up on each other.
Worse part is the FBI or media could have stopped this charade being forced on the American public but chose to be part of it instead.

Biden, as with the rest of the political class, is a parasite. He is a gigantic tick, which fastened itself to the public’s neck, and has been sucking the life blood of this nation ever since. He cares nothing for this country, its people or what it stands for. He has produced nothing, which is beneficial for society. And, he knows this. This self knowledge leads to self loathing. And, in order to make himself feel better, he transfers this resentment and hate to the public, which he sees as being better than he is.

Trump, on the other hand, is NOT a member of the political class. He sees himself as an outsider, more akin to a working man. He views himself as a success and seems to have little disdain for other people in general. In his early term as President, he may sometimes express a lack of understanding as to why people make sacrifices for seemingly little personal gain. That appears to have changed as he examines the sacrifices he has made as President. And, Trump has no political career beyond the Presidency.

Biden, on the other hand, seems to have no affinity for others, outside of his family circle. What he does, he does to guarantee his ability to remain attached to the neck of the public and make money.

When Biden gets mad, he likes to Challenge people to an IQ test. don’t think he do too well on that.

I took “the last century” to mean 1921-2020. So, let’s look at the record. Which presidents attended Ivy League colleges and which didn’t.

So in the past century 8 presidents attended an Ivy League college and 9 didn’t.

He says he is sick and tired of smart guys.Yup, that’s pretty obvious.

What a train wreck of a candidate. Yet people are still voting for him because Orange Man Bad.