Biden To Get Transition Funding, GSA Administrator Received Threats to Herself, Family, and Pets

Biden To Get Transition Funding, GSA Administrator Received Threats to Herself, Family, and Pets

Emily Murphy says she “received threats online, by phone, and by mail directed at my safety, my family, my staff, and even my pets in an effort to coerce me into making this determination prematurely.” 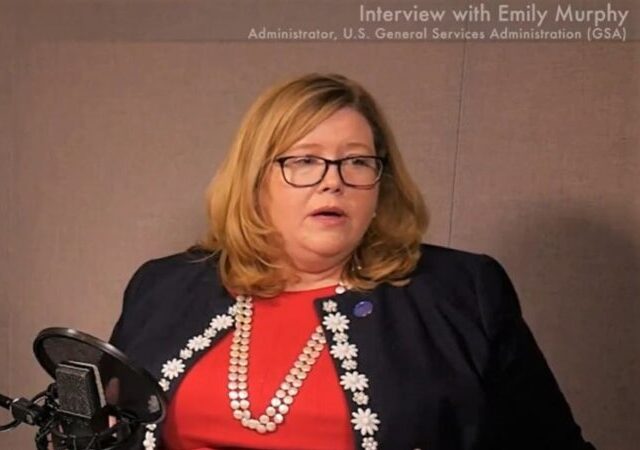 The General Services Administration has authorized funding for the transition to Biden.

I want to thank Emily Murphy at GSA for her steadfast dedication and loyalty to our Country. She has been harassed, threatened, and abused – and I do not want to see this happen to her, her family, or employees of GSA. Our case STRONGLY continues, we will keep up the good…

…fight, and I believe we will prevail! Nevertheless, in the best interest of our Country, I am recommending that Emily and her team do what needs to be done with regard to initial protocols, and have told my team to do the same.

GSA Administrator Emily Murphy issued a letter to the Biden campaign defending her delay while the electoral situation sorted itself out, but argued that now that votes were certified in key disputed states, the process could begin. In the letter, she noted she “received threats online, by phone, and by mail directed at my safety, my family, my staff, and even my pets in an effort to coerce me into making this determination prematurely.”

More from the letter via Fox News:

“Please know that I came to my decision independently, based on the law and available facts,” Murphy said in a letter to Biden. “I was never directly or indirectly pressured by any Executive Branch official—including those who work at the White House or GSA—with regard to the substance or timing of my decision.  To be clear, I did not receive any direction to delay my determination.” …

Murphy said her decision was based on “recent developments involving legal challenges and certifications of election results.” Earlier Monday, Michigan voted to certify its election results and the Pennsylvania Supreme Court threw out a Trump campaign challenge that sought to invalidate thousands of absentee ballots in Allegheny County…. 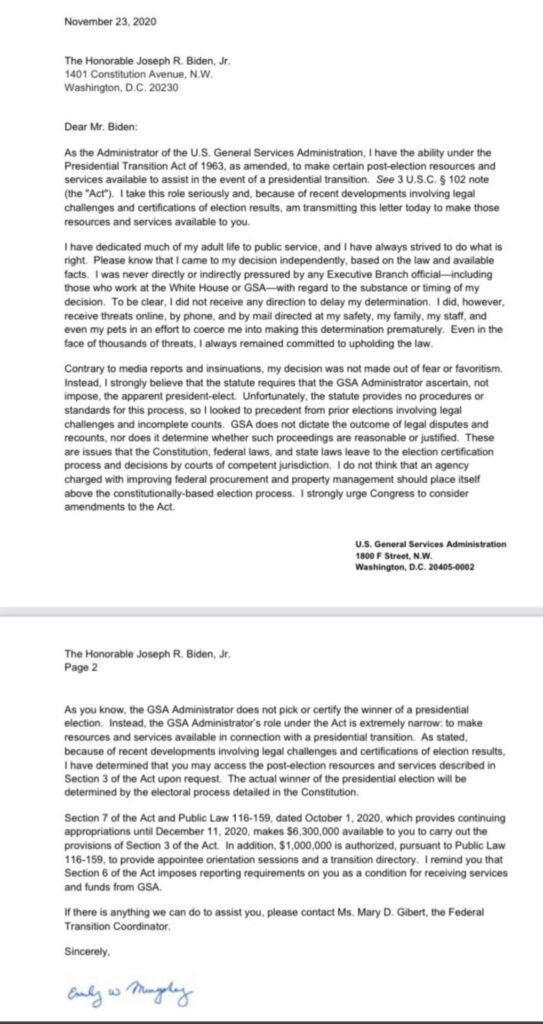 This tweet by a lefty journalist summed up the absurdity of the repeated media and Democrat assertions that Trump would refuse to leave office:

I was specifically told that there was a coup underway and he would never leave office and civil war was imminent and democracy on its last legs. pic.twitter.com/lpm2xemlOz

The only thing that will stop these threats will be when someone tries something and gets gut-shot.

Maybe scalping will make a comeback.

Answer: he’s at whatever rat-house rats like him hang out at.

If all the scum, of all the criminals, of all the traitors in the US government: this bastard is proving to be worthy of the greatest scorn.

Who is the “threat to democracy” again?

As a commentator somewhere else just said terrorism is legal now

Well they’re winning all the battles, because they have the ground game and will do what takes, while we rely on great principles that don’t put food in the mouth or get you government funding.

They got Wayne County to certify long enough for Dems to argue they really did certify, via threats.

They are getting GSA funding for their hoped-for transition, via threats.

It’s starting to look like we’re not a nation of laws. Important battles for the future of the country are being lost to terrorism.
It’s getting really really close to that now.

It is long past time to deal with them on a no holds barred basis. My experience is that gutter dwellers have to be confronted in the gutter.

Party membership has its rewards. Feel free to intimidate and threaten… it’s part of the benefits package.

I was once married to a woman who transformed herself into the epitome of government-girl.

She started off as a size 7 in 1960s era size. Sometime later she was regular shopper with Lane Bryant but her real force was becoming that person you get to when you “go down town”.

What a hoot. She never lost a case. We had similar experiences with threats against her, the family, the dogs and whatever. This was before the internet, mind-you.

Bless their hearts, if they ever showed up I never saw them. Our dogs were Great Danes and they really liked people. I practiced “out of the house” which is to say that I was actually in the house, day-in and day-out.

It would have been so awful, for them, had they ever actually showed up. In those days, all I had was a .357 revolver and a .45 ACP pistol.

I am so happy that I never had to actually shoot anyone.

Been saying for a while, the communists are now in charge.

This crap has to stop. Or be stopped.

“received threats … in an effort to coerce me into making this determination prematurely.”

They do it because it works …

Why do they give these jobs to fat, cowardly cvnts?

Because the Left backs up their people with muscle. Faced with criminal intimidation, where is the heavy hand the Repubs have…there isn’t any. In part, the criminal DNA is baked into Dem faithful. The short response is to quietly inform a key Dem that if anything happens like this…their family will…not maybe…Will suffer the same outcome but twice as bad. This “prosecute to the fullest extent of the law” doesn’t scare the Left as they own enough of the legal system to walk. We are talking criminal action as part of the Left’s portfolio.

notamemberofanyorganizedpolicital in reply to alaskabob. | November 24, 2020 at 1:22 pm

Be terrible if all the DEMS bank accounts got diverted to some Nigerian Prince’s…….

alaskabob in reply to notamemberofanyorganizedpolicital. | November 24, 2020 at 4:28 pm

Better yet… Salvation Army and the NRA.