Consummate swamp creature also pushed Russia-Collusion conspiracy, including that Russian hack switched 2016 votes to Trump. “It appears that Neera Tanden has deleted about 1100 tweets between November 16 and tonight.” 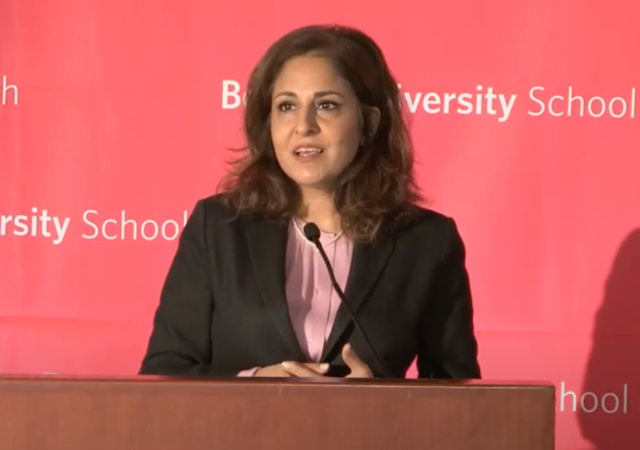 Neera Tanden, president and CEO of the Center American Progress (CAP), has a tough road to confirmation as Joe Biden’s budget director.

Tanden deleted tweets between November 16 and today due to harsh criticism of Republican senators, which she will need for confirmation.

It appears that Neera Tanden has deleted about 1100 tweets between November 16 and tonight. The screenshot on the left is from Nov. 16 on Wayback.

It was reported earlier today that Biden will name her as the director of OMBhttps://t.co/8WPKVcpKzO pic.twitter.com/WADGBDoDOe

.@neeratanden appears to have deleted her tweets about Susan Collins, whose vote she'll likely need for confirmation.
h/t @varadmehta pic.twitter.com/atwonFCaMb

I think I’ll bet the under on @neeratanden getting the votes to confirm her if any of those will need to come from the party whose “capacity for evil knows no bounds” by her telling (among other things). pic.twitter.com/X1uTLJ6dkT

Finally: "We are in the process attempting to expand the content we provide, including featuring more voices. I am grateful to those who have subscribed and made our launch a success: subscriptions will enable us to do ever more with our journalism here."https://t.co/MAy2VTpguX

.@neeratanden spread conspiracies that Russia hacked the 2016 election through voting machines and changed votes for Trump. Enjoy the confirmation! pic.twitter.com/eTKFAGszRR

Sen. John Cornyn’s (R-TX) communications director Drew Brandewie tweeted that Tanden has no chance of being confirmed by the Senate:

Neera Tanden, who has an endless stream of disparaging comments about the Republican Senators’ whose votes she’ll need, stands zero chance of being confirmed. https://t.co/f6Ewi6OMQR

Neera Tanden supports cuts to the social safety net, which, like a Republican, she refers to as "entitlements."

Biden supported cuts to Social Security. And so does his team.

About half of Black seniors rely on Social Security for 90% or more of their retirement income. https://t.co/v4CjY9TWfj

Everything toxic about the corporate Democratic Party is embodied in Neera Tanden. https://t.co/kWHcUK2VZ5

The war between Sanders and Tanden continued into 2019 when ThinkProgress, which is part of CAP, put out a video against the socialist senator.

One of the best attacks on Bernie in the last few years came from @thinkprogress pointing out he had stopped criticizing millionaires after he became one.

“Turns out railing against “millionaires and billionaires” can be quite the lucrative enterprise.”pic.twitter.com/NBQwjcg72J

Sanders said after he watched the video:

Sanders in his letter also singled out CAP’s president, a close adviser to Clinton during the 2016 campaign, accusing her of hypocrisy and untoward “personal” criticism.

“Center for American Progress leader Neera Tanden repeatedly calls for unity while simultaneously maligning my staff and supporters and belittling progressive ideas,” Sanders wrote, adding: “I and other Democratic candidates are running campaigns based on principles and ideas and not engaging in mudslinging or personal attacks on each other. Meanwhile, the Center for American Progress is using its resources to smear Senator Booker, Senator Warren, and myself, among others. This is hardly the way to build unity, or to win the general election.”

The leftist site Jacobin published a blistering attack on Tanden, telling its followers her “pick is even worse than you thought.”

Joe Biden’s likely nominee to head the powerful Office of Management and Budget, Neera Tanden, called for cuts to Social Security, saying, “we need to put both entitlements on the table as well as taxes.” https://t.co/3m91diqFDb @WalkerBragman

Supporters of Sanders and other far-left ideas have not forgotten Tanden’s snide remarks. How could they forget?

Biden admin pushing for Democrats to lose seats in 2 years with appointments like Neera Tanden. Bookmark this tweet. https://t.co/dMSUp4mT0q

Honestly it’s even worse than I thought. Neera Tanden felt like a really bad joke.

Neera Tanden literally suggested invading countries for their oil to cut our deficit. Rahm Emmanuel covered up the murder of Laquan McDonald. This is how we got Trump first time around. Dems trying really hard to repeat that blueprint for 2024

Neera Tanden is a threat to society. Any progressive in politics not calling this pick out is an embarrassment. https://t.co/mCKKA9OlD5

Neera Tanden in 2015 discussing the gig economy and the need to find "a third way forward" between giving workers full benefits and allowing businesses to classify them as independent contractors thereby denying them.

"Some option that allows people to have some benefits." pic.twitter.com/QILS2mIP2B

“Tanden owes her entire career to the patronage of Hillary Clinton, and her devotion to Hillary approaches restraining-order levels of creepiness.” https://t.co/teDZSjgA0X

“About half of Black seniors rely on Social Security for 90% or more of their retirement income.”

If that’s not an indictment of being your own worst enemy when it comes to planning for your future then I don’t know what is.

Democrats get do-overs from the media. Republicans get 1 12 inch stick up the a**

“Sen. John Cornyn’s (R-TX) communications director Drew Brandewie tweeted that Tanden has no chance of being confirmed by the Senate”

Wanna bet? Mitt Romneycare and the Abortion Twins (Collins and Murkowski) are a good bet to vote for confirmation.

What makes Cornyn think that those GA vote counters are gonna let Republicans control the Senate?

notamemberofanyorganizedpolicital in reply to Recovering Lutheran. | November 30, 2020 at 12:22 pm

She needs to be convicted not confirmed……

“Tanden deleted tweets between November 16 and today due to harsh criticism of Republican senators, which she will need for confirmation”

“The internet is forever”

notamemberofanyorganizedpolicital in reply to pfg. | November 30, 2020 at 2:37 pm

I’m sure they were all about wedding classes and Chelsea’s yoga pants.

Wow, between Pelosi’s black shirt street thugs destroying statues with EFFE TRUMP/EFFE AMERICA over the weekend, and this nasty witch spewing her tweeter hate, there’s just so much ‘unity’ going on these days.

Please, pleases, PLEASE do not be distracted by the shiny objects being dangled in front of you. This is all a distraction.

Since the dawn of politics elected politicians have been appointing political hacks to public office, for their own gain. There is nothing new here. So, Tanden is nothing more than swamp gas. The important point to focus on is that an immense amount of observable and provable election fraud occurred which gave Joe Biden the lead in several places, thereby denying DJ Trump the victory. Reverse the results of that fraud and all of these shiny distractions disappear.

On a more serious note, now that the radicals feel they have won the election, they are running amok, destroying more monuments and public property. Perhaps that is a far greater future problem then a political hack who can be bought off for thirty pieces of silver. “Bad boys, bad boys, whatcha gonna do when they come for you?”

Perhaps they’ll confirm her if she says “Sorry, not sorry?”

Any chance at all that those tweets will be introduced as evidence in her confirmation hearing?

I think the Swamp has a good way of defending its people; I’m wondering if any Pub Senator will have the temerity to point out these tweets. I’m guessing the answer is ‘no’.

It would appear she’s not deleting them quickly enough. What a shame.

The Biden administration is going to be such a train wreck I’m trying to be zen about it and see it as a source of entertainment akin to when the clowns pop out of the tiny car.

I’ve never seen so many despicable swamp creatures lined up at the trough to get their rewards.