Chancellor Merkel: “Throughout the winter months, we will have to limit private contacts.” 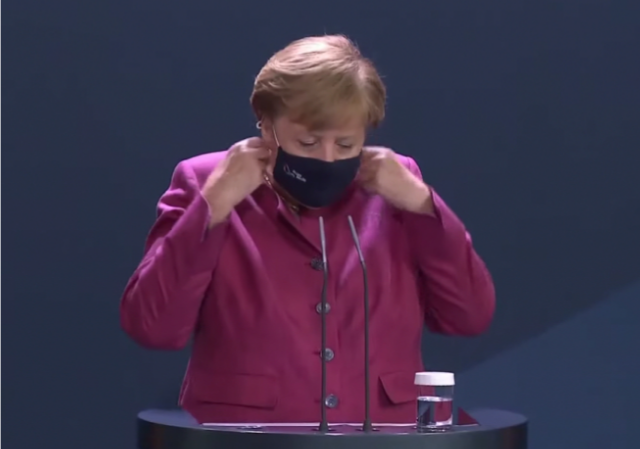 Despite a nationwide lockdown, Germany on Thursday reported a record surge in new cases of coronavirus.

“Germany recorded nearly 20,000 new coronavirus cases in one day, its highest level yet,” German public broadcaster Deutsche Welle reported. “It brought the total case tally in Germany, a nation of 83 million people, to 597,583. Another 118 fatalities raised the death toll to 10,930.”

On November 1, German Chancellor Angela Merkel ordered a four-week national lockdown. Germany’s state media described the move as “lockdown-lite,” where schools shall stay open, but all “non-essential” businesses and restaurants will be closed, and public gatherings are banned. The latest lockdown measures are the toughest since Berlin began easing coronavirus restrictions in May.

Merkel has been telling people to stay home and follow government orders, claiming “human lives depend on it.” She hopes for a “turnaround” by disrupting the country’s economy and social life ahead of Christmas.

“Throughout the winter months, we will have to limit private contacts,” Merkel warned. “The light at the end of the tunnel is still far away.”

Reuters reported the surge in the country’s coronavirus cases and the ongoing lockdown chaos:

Germany’s daily new coronavirus infections hit a record high on Thursday as data showed shoppers had stocked up on toilet paper, hand sanitiser and baking ingredients ahead of new lockdown measures that took effect this week.

The number of confirmed coronavirus cases increased by 19,990 to 596,583, data from the Robert Koch Institute (RKI) for infectious diseases showed on Thursday.

The Statistics Office said rising coronavirus cases and the new partial lockdown, which took effect from Nov. 2, had increased the demand for some hygiene articles and foodstuffs in the second half of October.

Sales of toilet paper in the week beginning Oct. 19 were 139% above the average for the pre-crisis months of August 2019 to January 2020, the Statistics Office said. (…)

The Statistics Office said rising coronavirus cases and the new partial lockdown, which took effect from Nov. 2, had increased the demand for some hygiene articles and foodstuffs in the second half of October. (…)

Purchases of disinfectant have risen continuously in recent weeks and were up 104% over pre-crisis levels in the last week of October, but remained lower than during the first lockdown in spring, when sales at times increased almost eight-fold.

Germany is not the only European country to impose a blanket lockdown. On Thursday, Greece ordered a three-week nationwide lockdown aimed at stemming the resurgence of the Chinese pandemic. France, where major cities are already under a lockdown, the restrictions of public movement have been tightened.

“Paris will ban delivery and takeaway services for prepared food and alcohol” during the night, TV channel France24 reported on Thursday.

The economy has been one of the biggest victims as Europe copes with the so-called ‘Second Wave’ of the Wuhan virus. While the United States registered a swift recovery under President Donald Trump, the EU and the euro currency zone economies, including France and Germany, have shown little sign of bouncing back.

Despite a €1.8 trillion ($2.1 trillion) recovery plan floated by European countries, their economies will not see a rebound until 2023, the EU officials predict. The EU “downgraded its expectation for the recovery in 2021 by 2 percentage points from the 6.1 per cent expansion it forecast in May, to 4.1 per cent,” London’s Financial Times reported this week.

The resurgence of the Chinese pandemic and the flurry of EU-wide lockdowns have “put the recovery on hold in the short term,” EU Economic Affairs Commissioner Paolo Gentiloni said on Thursday.

“We never counted on a V-shaped recovery. Now we know for sure that we won’t have one,” he added.

The U.S. gross domestic product (GDP) for the third quarter (July-September) rose by an annualized rate of over 33 percent. The country was in the “midst of the fastest economic recovery from any crisis in history,” Treasury Secretary Steven Mnuchin assured recently.

Mask mandates and lockdowns do work, just not for preventing the spread of Covid-19.

But to terrorize the people and crash the economy, they work quite well.

They offer marginal protection for bacterial contagions. They are unproductive or counterproductive to mitigate sub-micron spread. Aerosols evades capture. Droplets evaporate and are ingested. Curiously, infection rate seems to be unaffected by heat and humidity.

That said, cases: past, probable, posible and present? How many people develop the disease? How many are deemed non-viable? How many received early, out-patient treatment to mitigate its progress?

It’s all for show, the government can claim that we did all could to prevent the spread. To them the optics are more important than shutting down an economy, putting millions under undo economic and other stress. They can raise their hands and say, we tried, the people didn’t do enough or make enough sacrifices.

They work for implementing total dictatorship.

Oddly enough, in our neck of the woods, most American jurisdictions reached peak exponential disease progression and were declining before the implementation of lockdowns and imposition of mandates. I wonder how many people are infected with SARS-CoV-2 which coexists with bacterial infections from collectors/concentrators a.k.a. “masks”.

I contracted an awful bacterial infection three weeks ago and am just now getting over it after taking one steroid pack and two rounds of antibiotics. I’d been wearing masks with the elastic around the ears. One evening the area just under my earlobes became very sore and cracked and the next day I had a low grade fever and my lymph nodes swelled up on each side. The next day I broke out in a horrible looking rash all around my ears, down one side of my jaw to my mouth and down my throat. Not sure if I was allergic to the mask or it breaking my skin allowed bacteria to grow. I’ve had thyroid cancer so the swollen lymph nodes had me in a panic.

I no longer wear anything around my ears but I’m still afraid that just having my mouth covered may cause me to contract another infection. :/

Go figure. Why do we still trust these so-called experts?

Deaths aren’t tracking “cases”. Perhaps “cases” are irrelevant. I personally believe the “cases” numbers being given are fraudulent, a combination of flu being included in the covid numbers and excessive PCR amplification.

What’s a case? Is it a positive test result, or is it an illness?

Per our county health dept, there are confirmed, probable and suspect cases (a new category begun this week). They all count.

Lockdowns are a scheme to preserve the virus by giving it a lasting supply of food.

And masks do the same by inhibiting “herd immunity” – if they actually work as advertised.

Perhaps our “experts” who have devised this devious strategy have found that acquired immunity only lasts for four months, by slowing the infection rate with strict lockdowns this may ensure the virus could well be immortal, with continuous waves of infections begetting continuous lockdowns, ad infinitum.

My governor, who is a darling of the left, popped out of her cave to hector us yet again, yesterday. After being applauded by the media for months as being an example of how to keep cases down and the population under control, the “population” decided they weren’t having it anymore and cases started increasing a bit mid September. By the end of October instead of seeing 100-200 cases per day, we’re “breaking records” with over 1,000 cases a day. We fully expect another severe lock down order by the end of next week. She suggested yesterday we should be wearing masks in our homes as well as outside since family members could be asymptomatic.

Now they’re reporting cases per million people.
Michigans U.P. has one of the highest rates with 64/ million
Problem is there is only 1/4 million people up there.
so 16 total.
Anything to make it sound worse than it is.
(I’m assuming you’re talking wretched Gretchen)

The lockdown is a scam.

Are we in agreement yet??

notamemberofanyorganizedpolicital in reply to TheFineReport.com. | November 6, 2020 at 5:01 pm

“….The Biden campaign has not hidden their goals and aspirations. These are not stupid people. They are scheming, conniving, ever-planning, ever-manipulating & Machiavellian members within the political system, lusting for power, influence and cocktail party affluence.

The Biden “agenda” per se’, has nothing whatsoever to do with a legislative roadmap. Their larger objective is to use the power of the executive to rule over the proles by working around the commonly known “representatives” of government. If you doubt that approach remind yourself that 2009 Obamacare was opposed by 76% of the electorate.

What they are planning to do is weaponize COVID-19 to attain ideological objectives. This is why they hyped the fear within it for almost a year. Nothing within their plan requires the approval or consent of any representative body in Washington DC. COVID is the tool to “fundamentally change” the way the United States exists.

On October 23rd, those behind the Biden campaign dropped all pretense, openly having their candidate state publicly his intention to control the lives of all Americans using the authority of a weaponized federal government to advance national COVID-19 regulations.

As you watch this video from Biden’s campaign it is important to remember state government officials have already moved to define “essential businesses” and “essential workers” during the forced shut-downs. That is going to become a bigger issue downstream; however, for now just watch closely what Joe Biden is saying here:

The Dept of Transportation would be the agency enforcing a national interstate transit mask requirement. However, don’t focus on the DoT part of what he was saying… that’s only one creek… Instead focus on the downstream use of all federal regulatory agencies and how they align within a Federal COVID compliance network… that’s the river….