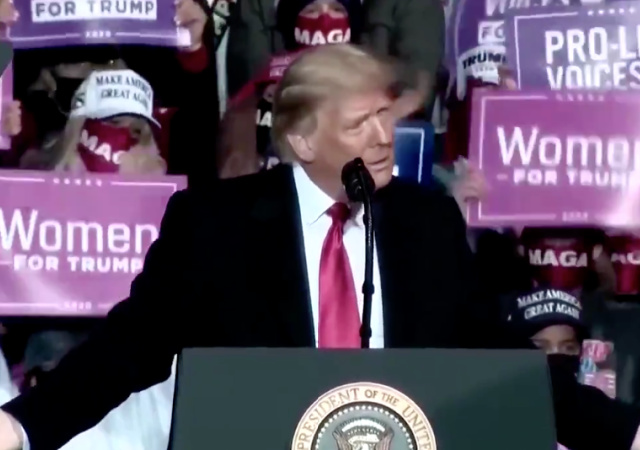 I wish President Donald Trump would poke fun at himself more often. It’s refreshing and hilarious.

Trump lags among suburban women. So he went on stage in Pennsylvania and begged them to like him.

At a rally in Pennsylvania, President Trump claimed suburban women voters should like him because he 'ended the regulation that brought crime to the suburbs’ https://t.co/Gn4UhLIaTQ pic.twitter.com/5gVYMCicgY

“So I ask you to do me a favor. Suburban women: will you please like me? Please. Please. I saved your damn neighborhood, OK?” Trump asked in a sarcastic tone. “The other thing: I don’t have that much time to be that nice. You know, I can do it, but I gotta go quickly. We don’t have time. They want me to be politically correct.”

Trump noted “his move to rescind the Obama-era fair housing regulation that aimed to combat segregation in the suburbs.” This move saved their neighborhoods, he said:

“I ended the regulation that brought crime to the suburbs and you can live the American dream.”

The president said his decision to dismantle the regulation benefits everybody, including minorities.

“Remember this, 29 percent of the people experiencing the American dream in the suburbs happen to be minority and you don’t know that, but 29 percent,” Trump said. “We’re doing this for everybody.”

Unfortunately, stopping something before it happens is rarely rewarded because it’s hard to demonstrate the result of the action.

If I were Trump, I would point out that his policies were saving the suburbs by making sure that antifa was limited to just destroying the core of the city.

Projects and Section 8 only serve to destroy neighborhoods. They cause an exodus, were people who work for what they have loose most or all their equity. This has been happening since the sixties. Those who benefited from this SCAM should be paying us reparations, plus compounded interest.

Section 8 housing… how about a large housing unit next to the obamas?
I would love that

There are areas that will never, EVER see government social engineering. Martha’s Vineyard, Beverly Hills, Hyannis Port, The Hamptons, Aspen, Malubu, Beverly Hills, and more. The Obamas will never be subject to such indignities.

That’s the problem, most Liberals never suffer the consequences of what they inflict upon the rest of us

IMO, we should end all housing ‘projects’. They have been a disaster. Instead simply use DoD table for a housing allowance. It is already based upon zip code so it is actually based upon local rent levels.

The government could then sell off their inventory of public housing which would open it up to private sector revitalization.

You forget about whom you speak. You can’t take the hood out of the homey.

Apartment buildings, projects for riff raff, have quite short lifetimes. The reason is that the people occupying them have no respect (but they feel entitled to respect) for them. Withing a few years of being built, they are already run down. Because of this we don’t see hardly any built today.

Currently, they push Section 8, and because they are spread out over bigger areas, they destroy much more than projects.

The truth is that the kind of people placed in them are the real problem.

In the 90s these women were referred to as Soccer moms and they would lay down for slick willy. Mentally hasn’t changed neither has the IQ.

“lay down” for slick Willie
I see what you’re saying.
They’d happily give him a blow job for preserving abortion. And their husbands would be happy to watch.

A lot of these ‘soccer moms’ are female Walter Mittys, imagining themselves as feminist warriors – while living off a man. Idiots.

Only pain will change the views of people like this. The democrat’s brownshirts will see to that.

Malcolm X and I agree, white liberals are not the Black man’s friend.

I grew up in Milwaukee, I love that city, went back 2-3 year till my sister passed, no relatives left.

Yeah, sure. And Santa Claus leaves the bad children lumps of coal.

Of course in the land of the secret ballot nobody can ever verify this. But is it plausible? That all depends on how many suburban women you happen to know.

All American: Pro-Life, Liberty, and the pursuit of Happiness.