Trump Thanks Supporters Outside Walter Reed With Surprise Motorcade Visit

Trump Thanks Supporters Outside Walter Reed With Surprise Motorcade Visit

Trump tweets to supporters: “I really appreciate all of the fans and supporters outside of the hospital” 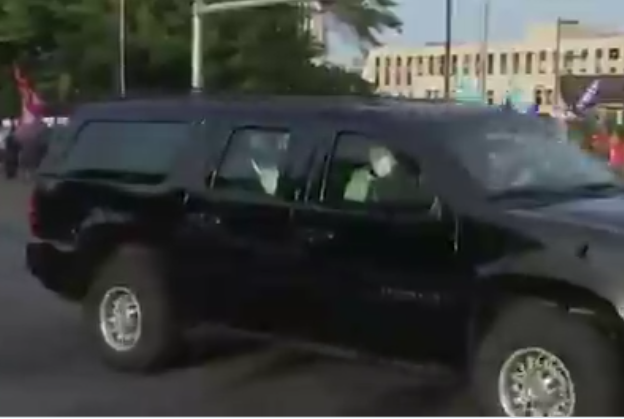 President Trump appears to be doing very well at Walter Reed; indeed, his doctor said Sunday morning that he might leave the hospital as early as tomorrow and head to the White House to complete his treatment for COVID-19.

On Sunday, Trump posted a video on Twitter posting a personal update on his condition.  He shares  his gratitude to Walter Reed and to his medical team, and he also had a message for his supporters who have been outside Walter Reed since before he arrived to wish him well.

????? ??? to all of the Great American Patriots who have come out tonight, in support of @realDonaldTrump at Walter Reed Medical Center. We’ll all get through this, TOGETHER! #MAGA??? pic.twitter.com/MkM1XWSpdQ

He said he will be making a “surprise visit” to thank them for their support.

A little while after this video tweet was published, the president greeted his supporters outside Walter Reed.

WATCH: President Trump greets supporters during a "surprise" visit outside Walter Reed Medical Center from his motorcade. He is wearing a mask. pic.twitter.com/ko6kn6nscw

Not only is Trump keeping his campaign’s momentum going from the hospital, but the Trump campaign is rallying Trump supporters with ‘Operation MAGA.’

The Trump campaign is keeping at “full speed” as President Trump fights the novel coronavirus, with a new “Operation MAGA” that includes events featuring Vice President Pence and members of the Trump family in key battleground states across the country, Fox News has learned.

. . . . Trump campaign manager Bill Stepien, who also tested positive for coronavirus on Friday, is working remotely, but is not slowing down, according to a senior campaign official.

. . . . . “Operation MAGA will fire up the entire MAGA universe to keep President Trump’s campaign at full speed until our Commander-in-Chief returns to the campaign trail,” Stepien told Fox News. “Vice President Mike Pence, the First Family, our coalitions, and our grassroots supporters will be out in full force to show the real enthusiasm behind the President’s re-election and to show we’re working as hard as he always does.”

After the debate, “Operation MAGA” is set to shift back to in-person events, beginning with Pence’s travel to Arizona.

You can read additional details here.

Additionally, the campaign is being featured in the YouTube masthead for 24 hours beginning Saturday at midnight.  The message is intended to thank Americans for supporting the president as he battles the Wuhan coronavirus.

Only a truly great man would do a great thing like that. He’s the best. Future generations will look back acknowledge the fact one day.

notamemberofanyorganizedpolicital in reply to UserP. | October 4, 2020 at 7:58 pm

President Trump strolls through the valley of death… whistling.
Dr. Fauci may soon be looking for work.
The FDA can be replaced by a singing dog.
The Teachers can get their dang tails back to school.
It’s a three day bug if you have a real Doctor.
And we aren’t going to be needing that vaccine.

notamemberofanyorganizedpolicital in reply to snowshooze. | October 4, 2020 at 8:04 pm

Note that his White House physicians got nervous when he had a fever, a cough and his pulse oximeter reading got down to 94. Months ago a thoughtful friend gave us old folks a pulse oximeter for just such an occasion. When delay can be fatal, it is a handy, low cost, easy to use device.

About $50 or so at the drugstore. If you have any issue it’s a good check to have.

My sister the pulmonary specialist has patients that live for years in the mid to upper 80’s, so lower than normal readings are not necessarily the end of life.

Good point on the readings. I should have put it that a drop below your baseline is what you should not ignore, which in Trump’s case looks to have been from about 98 to 94. The “Contec” brand one that I was given costs about $30 on Amazon.

It was a great move by Trump to take a ride. It showed that he is recovering, feeling better, and wants to show that to the country and his supporters. He knows that the press will try to say that he is about to die, stir up trouble with his staff, etc, etc.

And, by comparison, he is showing his health vs Biden, since the MSM does not talk of the health of Biden.

About the “controversy” of the initial reporting of O2 usage, pulse oximeter numbers, and temp – who cares? And Cmdr Conley may have been honoring the request of the President on the extent of his initial status.

BTW, who thinks that it was the Notre Dame president who was the spreader? From what I’ve read, he was exposed earlier in the week to a positive case and then came to the Rose Garden. He may have tested negative, but still could have progressed during the waiting time. It was reported that he was very interactive with people – hugging, shaking hands, etc.

Any of you Trumpseeds figure out that those Secret Service agents inside that hermetically sealed vehicle are now going to have to quarantine for 14 days away from their job and families?

notamemberofanyorganizedpolicital in reply to rdm. | October 4, 2020 at 9:26 pm

Did you get a down vote?

Fake outrage is unbecoming, much like what comes from the press.

Considering age etc….not as big a risk as Biden/Harris in office.

Any of you committee cgray451 members figure out we don’t give a damn what you have to say?

We understand you’re too stupid to understand the SS agents don’t hide from the president, sick or not.

Now Hiden Biden is another case entirely. Perhaps he has a pool down in that basement he hides in so he can embarrass the female agents.

You do realize those who are doing Security for their boss signed up for this job. There are many who serve our President overseas without the benefit of being with family or near friends. The duties were in the job description when they knowingly signed up. Give it a break.

You do realize those who are doing Security for their boss signed up for this job. There are many who serve our President overseas without the benefit of being with family or near friends. The duties were in the job description when they knowingly signed up. Give it a break.

Her, cgray451, they’re protected; they’re wearing masks. Not wearing one is why Trump got it, isn’t it? That’s what I’ve been hearing from Dr Pelosi and Dr Biden.

DEMOCRATS GETTING THE OCTOBER SURPRISE

THEY DO NOT WANT.

The left is melting down over PDJT endangering his Secret Service Detail. But you know in their heart oh hearts, they would squeal with joy if a whole squad of them were wiped out as long as it got PDJT. God Bless President Trump and God Bless the USA! Dan Bongino on fire tonight.

notamemberofanyorganizedpolicital in reply to CKYoung. | October 4, 2020 at 9:25 pm

Those secret service agents have probably already been quarantining with him at Walter Reed, and as above poster said, will be doing so back at the White House.

This man is a great war-time president.

He is a great peace-time president.

His opponents are either stupid, willfully stupid, or are participating in corruption.

notamemberofanyorganizedpolicital in reply to TheFineReport.com. | October 4, 2020 at 10:08 pm

Smith: Is The Pussification Of America’s Youth Scientifically Engineered?

“….Not all younger Americans suffer from this affliction. Many are strong willed, but those that are usually admit freely that they feel isolated among the majority of their peers. I find it hard to believe it’s mere coincidence that perhaps the weakest generation of Americans ever is now facing the worst series of crisis events in our history. The whole thing seems planned…

Stress inoculation is a lot like strengthening your own immune system – Sometimes you have to work through sickness when you are young in order to improve your immunity to sickness later in life. By the same token, you have to experience stress events when you are young so that you can better deal with crisis events later in life. Otherwise, you grow up as malleable as jello and just as easy to devour.

The good news is, even as adults stress inoculation can be learned. As our world grows more and more unstable and uncertain, being able to manage our own fears is becoming paramount to our continued liberty and livelihood.

JusticeDelivered in reply to notamemberofanyorganizedpolicital. | October 4, 2020 at 10:36 pm

“Stress inoculation”, otherwise known as adversity builds character. What we have today is a crisis of poor character.

Can you imagine Biden broadcasing from his basement the famous FDR Depression line, “the only thing we have to fear is fear itself”.
Of course, that is a bit unfair, as Biden is not hiding in his basement because of Covid, but because he can’t take too much exposure to the light of day of serious questioning. Can anyone imagine Biden giving a long speech and then taking a ton of hostile questions, as Trump does regularly.

Trump is a real leader with no agenda except the good of the country. In fact, his hospitality, golf and travel-related businesses could hardly have been more badly positioned for Covid and he may end up losing much of his fortune.

So, the president, chinaVirus and all, was out more today than HidenBiden.

The whole damn marxist cabal known as the democrat party is a joke. Full of old sick pathetic people like HidenBiden, Pelousi, Schitt, and WaddlingNadler.

What a line up!

To those complaining about those poor SS agents in the vehicle with Trump…..

Everyone had masks and the ride was less than 15 minutes. You “science” guys on the left KNOW this means everyone is fine. Because science. Because you “believe” in science. And republicans don’t’. We just got lucky this time…..