“I want to thank everybody for the tremendous support. I am going to Walter Reed Hospital. I think I’m doing very well, but we’re going to make sure that things work out.” 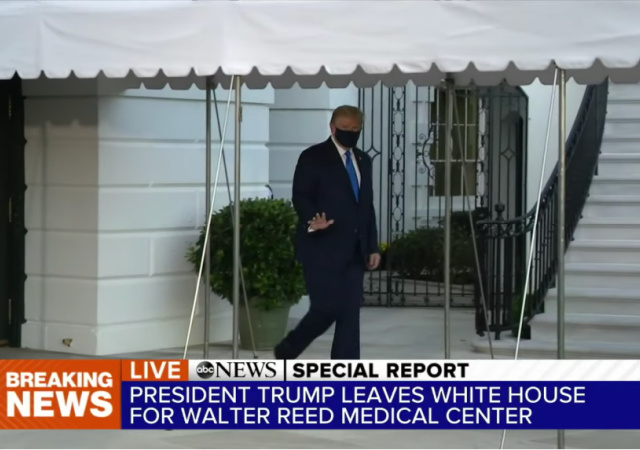 President Donald Trump arrived at Walter Reed Military Medical Center for cautionary reasons after he came down with COVID-19.

People close to the president all said he is in “high spirits” worked on Friday despite having mild fatigue.

Trump released this video message when he arrived:

The president, upon arrival to Walter Reed, tweeted a pre-recorded video from the White House, thanking Americans for their “tremendous support.”

“I want to thank everybody for the tremendous support. I am going to Walter Reed Hospital,” the president said. “I think I’m doing very well, but we’re going to make sure that things work out.”

“The first lady is doing very well,” Trump said. “So thank you very much. I appreciate it. I will never forget it. Thank you.”

Thank you for the love you are sending our way. I have mild symptoms but overall feeling good. I am looking forward to a speedy recovery.

The president will be live streaming his ‘Make America Great Again’ event at 7 p.m. on Friday. You can register to attend virtually HERE.

Like he sent the Comfort to NY out of an abundance of caution.

Assuming he recovers quickly, he can tout the therapeutics he helped bring forth in rapid speed. Imagine how long Biden would have taken.

Wishing him the best, and to cancel some of the hate sent his way. The election is too far away for some of these people.

Biden is using all this to further argue that the Republicans, by their lawsuit, are risking the loss of guaranteed insurance coverage of preexisting conditions for the American people. The Republicans are not responding in any effective way. How can they be so stupid? All the the Republicans have to do is draft a one-page bill that guarantees preexisting condition coverage for all forms of medical coverage, and publicly present that proposed bill to Nancy Pelosi for passage by her House immediately. The Republicans can then wave that proposed bill in the air at every opportunity and thus de-fang that issue.