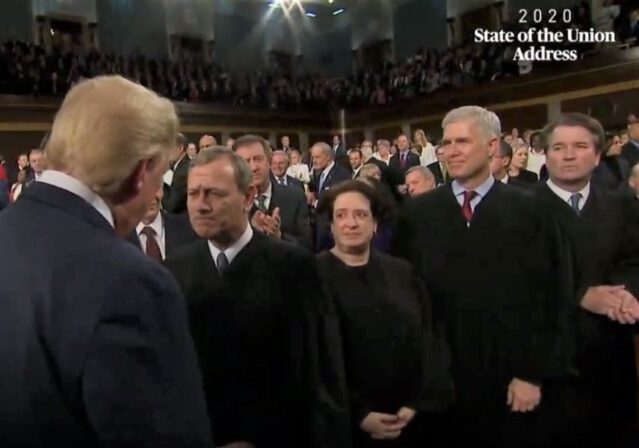 The U.S. Supreme Court, with only Justice Sotomayor dissenting, handed the Trump administration a win, staying a lower court order that had required the government to continue the Census count through the end of this month.

Justice Sotomayor wrote a dissent, which reads in part:

Today, the Court stays a preliminary injunction requiring the Census Bureau to follow the data collection plan the agency once described as necessary to avoid “risking significant impacts on data quality.” Electronic Case Filing in No. 5:20–cv–5799, Doc. 198–7 (ND Cal., Sept. 22, 2020), p. 131 (ECF). The injunction required the Bureau to continue its data collection efforts until October 31, 2020, a deadline the Bureau itself selected in response to the significant operational disruptions caused by the COVID–19 pandemic. The Government now claims that this Court’s immediate intervention is necessary because, absent a stay, the Bureau will not be able to meet the December 31 statutory deadline for reporting census results to the President. This representation is contrary to the Government’s repeated assertions to the courts below that it could not meet the statutory deadline under any circumstances. Moreover, meeting the deadline at the expense of the accuracy of the census is not a cost worth paying, especially when the Government has failed to show why it could not bear the lesser cost of expending more resources to meet the deadline or continuing its prior efforts to seek an extension from Congress. This Court normally does not grant extraordinary relief on such a painfully disproportionate balance of harms.

There is separate litigation pending about whether the Census needs to count illegal aliens as part of the Census.

Glad I’m not the only one that doesn’t approve of her racism on the court.

The “Wise Latino ” is also the one who wrote the dissent in Shuette V Bamn where she claimed it was unconstitutional for the state of Michigan to add an amendment to the state constitution requiring compliance with the 14th amendment of the US Constitution. Joined by Ginsburg.

Isn’t that covered by Article VI ?

The Senators and Representatives before mentioned, and the members of the several state legislatures, and all executive and judicial officers, both of the United States and of the several states, shall be bound by oath or affirmation, to support this Constitution; but no religious test shall ever be required as a qualification to any office or public trust under the United States.

The Wide Latina is the same league as the Airhead Latina, Cortez.

I thought the word was Latinks?

Even if someone read it to her, would she be able to comprehend?

Think about how many left-wing seats will be lost if deportable aliens are not counted.

You can count on Sotomayor for a complete failure to reason or think logically about a legal issue and instead simply state what progressives want.

She is an embarrassment to the court.

Average Hispanic IQ is 87, marginally higher by that American blacks. Hispanics deserve credit of good work ethics. While they have average crime rates higher than most Americas, it is far below black’s crime rate.

Her inability to reason is not really her fault, rather fault lies with those who those who promoted her beyond her capabilities. We need to insist that people are not unjustly promoted.

“”promoted her beyond her capabilities.””

Another example, along with Biden, of the failure of the Peter Principle. They’re both well beyond their level of incompetence.

BS. You know this how?

The Bell Curve (Herrnstein & Murray, 1994) presented general readers an update of the evidence for the hereditarian position along with several policy recommendations and an original analysis of 11,878 youths (including 3,022Blacks) from the 12-year National Longitudinal Survey of Youth. […] The study also found that the average IQ for African Americans was lower than those for Latino, White, Asian, and Jewish Americans (85, 89, 103,106, and 113, respectively; Herrnstein & Murray, 1994, pp. 273–278).

From THIRTY YEARS OF RESEARCH ON RACE DIFFERENCES IN COGNITIVE ABILITY, Rushton & Jensen, 2005

She’s an idiot because she’s an idiot, her race has nothing to do with it. Actually, take that back. She is unwise, mendacious, dishonest, any number of things but she is probably not an actual idiot. Theoretically smart people are capable of believing stupid things.

I beg to differ. Look at the US Senate for example. There are a number of Senators who are lawyers and have obviously low IQ’s like Hirono, Cardin, Menendez, Gillibrand, Casey, et al.

Long day, just wanted to read some comments, but HAD to log in to reply to this racist bullshit.

Yes, but have all the Federal judges from Hawaii issued THEIR final rulings?

Remember it is not settled until some obscure Federal judge from Hawaii says so.

This is basic “Branch of Government” 101 kinda stuff here. There is no way a legitimate judge is going to override the Legislative Branch. Not that we knew any different for the ‘wise’ one that dissented.

Ok, so I’m rather behind the curve in this one. What is going on here?

I’m not 100% sure but my sense from reading some previous headlines and the dissent above is that the CB usually finished the count around Labor Day but because covid voluntarily decided to extend the deadline to the end of October. Sometime in September they decided the extension was going to negatively impact their ability to crunch the enumeration into usable form and ended it earlier than they announced. This caused the usual suspects to file lawsuits to force the count to continue. I’m thinking the point of the order is that the October 31 date has no statutory force behind it as the CB did that on their own while the December 31 deadline for usable reports is a statutory requirement. The CB argument is essentially we know we’re f’ed on the December 31 deadline so we need to stop NOW to avoid being later, and additional time is not going to significantly increase accuracy. Of course Sotomayor and her ilk want to ensure the maximum number of people in the blue hells get counted.