No, Senator. You can criticize or disagree without it being considered “chastising.” 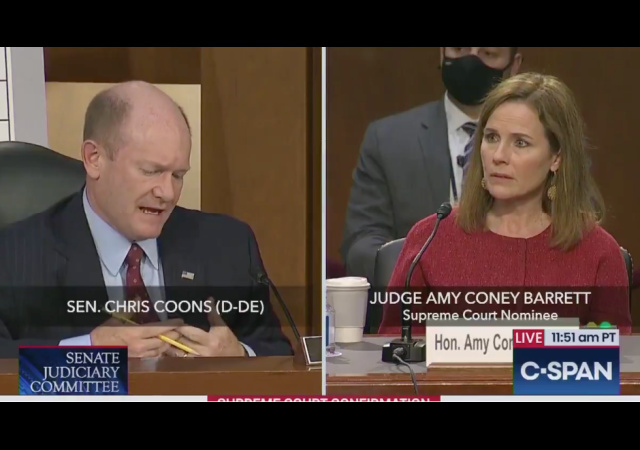 I thought the left did not like mansplaining because I’m seeing quite a few men on the committee mansplain to Judge Amy Coney Barrett.

Sen. Coons actually tried to explain to Barrett what she really meant when she called the ACA ruling from Chief Justice Roberts as “unsound” she was really chastising him.

Either Coons wants to make Barrett sound like a righteous female dog or stir trouble before she makes SCOTUS. Maybe both.

Democrat Senator Chris Coons tried to talk-down to Judge Amy Coney Barrett, telling her what he believed she was actually saying, in a piece that she herself wrote…

But, she quickly let him know just how wrong he was ⬇️#ConfirmACB pic.twitter.com/FDDtPpbdGh

Pressed on her own words that Chief Justice Roberts’ ruling upholding the ACA was “unsound,” Barrett tells Sen. Coons she was “not chastising” Roberts, but “as an academic, I did express a critique,” adds that she has “no hostility” towards the ACA. https://t.co/Lo43IEtjRG pic.twitter.com/YCKKhS9GgR

Wait, isn’t that mansplaining? I can’t keep up with the sjw lingo.

No, mansplaining only occurs when a Republican (conservative) man tries to tell a Dimocrat (leftist) woman what the truth of the matter is.

The other way around (like this Coonsplaining) is to be seen as just a fair and honest man helping a woman understand why she’s confused.

That is today’s understanding of mansplaining. Tomorrow may be completely different, depending on the needs of the narrative.

Having watched this all day, I have a “crush” on Amy. She is brilliant, extremely knowledgeable, humble and unflappable. The Republicans may finally get a great justice. My favorite moment:

Hopefully, Biden essentially calling over half the country stupid for thinking they are better off than under Obama-Biden – his “basket of deplorables” remark? – will have a similar result or, at least, the Republicans will still control the Senate, so radical policies do not get implemented.

For the Dhimmi-crats, Roberts is above criticism, I suppose; at least where Obamacare is concerned.

Coons is another extremist masquerading as a moderate. There’s no such thing in today’s Dim party.

The fool/tool, Coons, asked Judge Barrett about recusal if the Presidential Election came before the court. If so, why aren’t all the justices affected? Each one have been appointed by a R or D President.