Barrett was articulate, unflappable, knowledgeable, and on point throughout the hearings and all without a single note 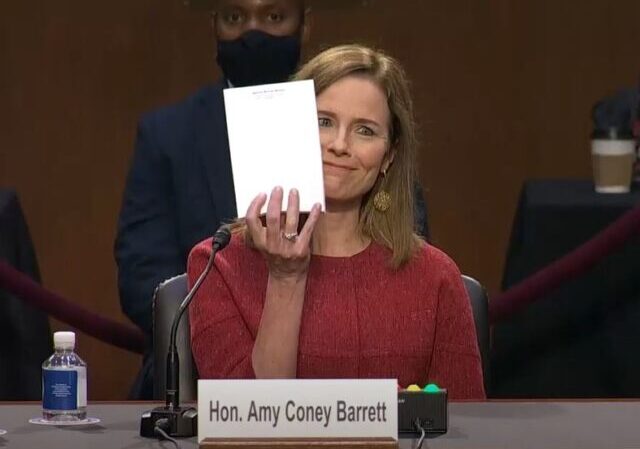 The confirmation hearings for Judge Amy Coney Barrett were held this week, and what a week it was.

Barrett was articulate, unflappable, knowledgeable, and on point throughout the hearings.

Here are my picks for her top five ‘like a boss’ moments:

#5: Reminds Amy Klobuchar there is no Roe v. Wade “super-precedent”

Klobuchar kept hammering the same thing, and ACB responded like a boss.

Watch as AmyK understands and (reluctantly) accepts that she’s out-gunned.

#4: She’s A Meaningful Mentor And An Inspiration

Moving testimony by those who have worked for and been inspired by ACB touched me . . . and I am not a fan of politicians with “this family of five had to share the same set of false teeth because capitalism!” stories.  This wasn’t that.  Watch:

Laura Wolk, a former student of Judge Barrett and the first blind woman to serve as a law clerk on the Supreme Court, gave a moving testimony supporting Judge Barrett's confirmation. pic.twitter.com/krMZridmHQ

Lindsey Graham just asked ACB how it feels to be nominated to the Supreme Court of the United States.

Her answer was incredible and I hope everyone takes a minute to watch and listen. pic.twitter.com/gpckQNobWG

That’s why the left—and even some on the right—fear her.  Having her own mind is a good thing, though.   And that she wiped the floor with Chris Coons in making the point is an added bonus.

Throughout the hearings, Barrett flawlessly cited case law, Court precedent, and legal principles on any and every matter put before her.  And she did it all without notes.

Cornyn: "Most of us have multiple notebooks & notes & books & things like that in front of us. Can you hold up what youve been referring to in answering our questions?"

Cornyn: "Is there anything on it?"

ACB: "The letterhead that says US Senate." pic.twitter.com/EJ2Wn1hj59

It was the moment that launched a thousand memes.  This one is my very favorite.

It had to be done. pic.twitter.com/8WVOpzVf0Y

Barrett’s seating isn’t critical because it will swing the court further to the right. It’s critical because she would become, from all appearances, the first female justice in decades who won’t automatically rule along leftist lines, or consistently place her own ideology over the Constitution and the intended role of SCOTUS. I would like a more conservative court. But I also recognize that what is needed most is a court without justices who are incapable of setting aside their own political feelings. And for all the ballyhoo, weeping and canonizing, Ginsburg failed miserably to do her job as established by our founding fathers.

Not critical but important enough. It renders Roberts impotent. Especially on big cases, where he decides he wants to swing.

She is a very sharp lady,I wonder if she has a photographic memory.

Not required. She has the clarity of thought of someone who knows what she is talking, tells the truth and has the moral conviction to speak it.

My favorite moment was when Senator Kennedy of Louisiana asked ACB about the comments made by the BUTTHEAD Professor about her family.

You know you are getting old when a Supreme Court justice looks really young. Sigh…..

That struck you too?

I remember being taken aback when Clarence Thomas was nominated. He is the first Justice that is younger than me. I got used to it.

I loved that moment with the scratch pad and her reply about the letterhead.

I am only surprised that President Trump had held off on nominating her and instead giving the slot to Kavanaugh. It’s not like it was a certainty that RBG would die giving him this chance.

She is so composed. I guess her having so many children has given her the patience to deal with some of these idiots in Congress.

Trump wanted to. But was told that she would face less resistance if she had to go through the process before the SCOTUS hearings. It was good advice.

When you think about it, it’s a wonder the Democrats didn’t seek or at least try to disqualify ACB from nomination over the number of times she gave speeches to various academic forums in her capacity as a Notre Dame Law School professor.

The reason being is that by doing so she was guilty of expressing free speech without getting arrested.

what it might have said
feinstein- don’t ask for hairdressers name
leahy- it’s not gravel in his mouth, nobody can understand him
durbin- he yells at homeless people on the streets
whitehouse- even his family avoids him during the holidays
coons- yss , he is the dumb
blumenthal- don’t ask about viet nam
klobucher- be alert for flying staplers
hirono- it’s not you, she hates everybody
booker- still holding out for an off broadway call back
harris- don’t ask if the scarring around the knees will fade away at some point

Cornyn: “Is there anything on it?”

ACB: “The letterhead that says US Senate.”

Well, it shows she ain’t no Leonardo. He would have been able to fend off intellectual lightweights like Senators while simultaneously filling up that page with sketches of flying machines, diving suits and siege engines. An inspiration to rocket scientists everywhere, but also a serious threat to any blank sheet of paper within reach.

Come on, you know that *any* scribble or word she wrote on the paper, even if done in Greek or Shorthand, would have been photographed and analyzed extensively by the vast quantities of Journalism majors who just happen to also be experts in Greek and Shorthand, and their bizarre interpretations would have become the story instead of Amy’s stellar performance.

Oh, I’m not saying she played it wrong. I’m saying that in my world it would be unusual to see someone sit through droning speechifying by senators without trying to do something productive—or at least semi-interesting—with the time. And that’s just one of many reasons why neither I nor any of my professional colleagues would ever be nominated to the Court.

You look at Barrett, you look at every cabinet member in the Trump administration – except Barr: all doing great work.

Barr and Sessions are exceptional scumbags, who sold out their country.

Add Wray, who apparently sat on this new Hunter Biden info since last year, which Tucker Carlson reported is accurate, confirmed with an addressee on the email distribution list (and not denied by Joe). Also add Rosenstein, who appointed Mueller. Trump selected these people, after evidently not paying attention to the historical lessons of RFK with JFK or Holder with Obama to pick an AG – like Chris Christie would have been – that he could be 100% sure of.

Here is my #6 …. No matter how she votes on cases in the future, I came away from watching all of it with the view that she is supremely well qualified; and with the judicial view, temperament and integrity to deliver excellent opinions, even when they might not agree 100% with what I might like. Furthermore, I even have some hope that she can bring a degree of leadership, collegiality and warmth to the court that will set a good example for the whole country. Of course, if Biden wins, this is all possibly a pipedream (if we get court packing with the likes of Stacey Abrams).

That said, I think her comments about “severability” suggest to me that she will uphold ObamaCare, which Trump may complain about, if still in office.

just one more, I think she is and will be an exceptional teacher/mentor. It left me with some hope for the future.

a welcome and appropriate addition to scotus

Finally someone on the court outside of the dc, nyc, ivy league bubble. there is more to america than the i-95 beltway echo chamber