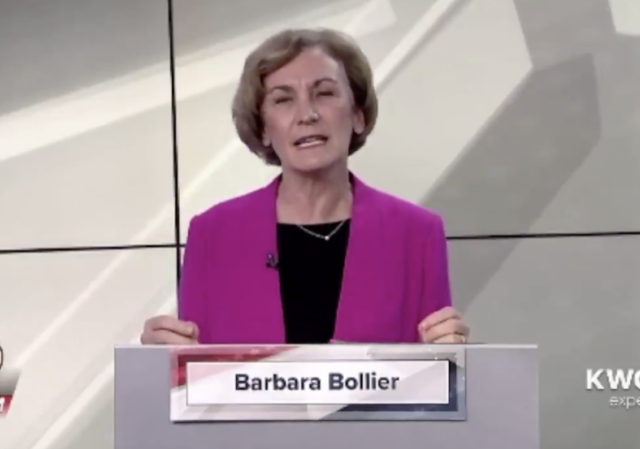 This is hard to watch.

Barbara Bollier is running for Senate on the Democrat ticket in Kansas. During a debate Thursday night, Bollier appeared completely underprepared and at times, overwhelmed.

These are the sorts of mistakes you make after sitting in Chuck Schumer's windowless basement for so long, @BarbaraBollier. #kssen pic.twitter.com/euIEZ8IYTt

I don’t think she’d even come close to winning a high school debate tournament with that kind of performance.

Bollier is a former state representative who left the Republican party in 2018 and is now running for Kansas’ open senate seat against Republican Congressman Roger Marshall. Sen. Pat Roberts announced he was retiring, leaving the seat up for grabs.

Bollier’s campaign is extremely well funded and prior to last night’s debate, a NYT poll had Marshall up by a meager 4 points. Media outlets like Politico and Vox are wish casting pretty on hard on this one, saying it’s in reach for the Democrats.

Off topic but Pennsylvania courts working hard to defeat Trump.

It might offer a new opportunity for a revisit to SCOTUS, this time with 9 Justices making a ruling….

This time with five conservative justices.

Fucking hell, a poll with a Republican in the lead! That must mean the Republican is actually burying the Democrat eh! ??

She was heard to say: Running for office is hard you gotta know things.

What was wrong with her performance? Strikes me as a little overqualified based on Democrat standards.

Looked to me like nothing that a little more WD40 in the teleprompter wouldn’t fix.

I actually feel sorry for the woman.

I don’t. F*ck the communist.

That outfit is puke-inducing. I am grateful that she will no longer be involved in the political process, prime time came and went. OTOH, maybe she had to pee or had some other urgent issue(s).

In Kansas here, and Bollier has been having a tough time for quite a few weeks. The Dems *really* wanted to run against Kobach, who they could have mashed as some frothing-at-the-lips radical conservative firebrand and whipped up the far-left vote, but Marshall is just a generally nice guy and hard for them to paint as an extremist (although they’ve tried). The floodgates of Dem PAC money are wide open for this one, and the squishy moderates who they’ve gotten to cross party lines and support her are getting endless radio and TV time, extolling the virtues of her ‘moderate’ views.

Moderate Dem, my (censored). There is literally no Leftist Dem plank she will not support, right up to and including abortion to the last week. The only chance she has is massive turnout from the deep-blue cities, and that ain’t happening so far, thankfully.

Never doubt, this communist isn’t even gonna get close to that seat.

She was a Republican until she was sworn in to the State Senate, then she became a Democrat. She seems awfully enamored with Australian-style gun confiscation/control and wrote the bill that would have imposed so-called “red flag” laws allowing a person’s guns to be confiscated on an anonymous person’s allegations (guilt by accusation). The citizen, of course, would have to “prove” innocence before getting their own property back.

She also claims that her ‘mission,’ if elected, would be to cut the cost of health care. What she doesn’t say, of course, is how the junior senator from Kansas is going to accomplish this feat.

We’re Kansans. We recognize B.S. when we see it.

Governor Laura Kelly slung a lot of BS too. Out of state dollars still got her elected.

Many politicians just look at which party has the most registered voters and run as that because they are just looking for an opportunity to exercise power like you see some governors doing with this panic pandemic. They don’t have a clue how to run anything. Most have never even ran a convenience store or a motel. McGovern tried his hand at a bed and breakfast after he lost the election and was over whelmed by the government regulations that he had no idea existed.

I guess her debate prep was with Dementia Joe and Il Duce Pelosi. She probably “won” against those two.

Kansan here. She has raised over 30 million dollars, about five times more than the GOP candidate. Almost all from out of state. You cannot unroll toilet paper without seeing one of her ads. Dems always try to buy seats in Kansas (because Missouri dems cross the border as soon as their kids reach school age – seriously) and outspend by a factor of about four. Go GOP!!

You know the Politicians always attempt to equate Election Success with the amount of money that a candidate recieves. Revisit the Republican Primary of U.S. House Majority Leader, Eric Cantor, who had tons of money, but lost to Primary Challenger Dave Brat who had so much less. ALWAYS REMEMBER THAT DOLLAR BILLS DON’T VOTE; VOTERS DO.

Trump was much more prepared for the long game in this past debate, versus correcting every single Biden lie. He reminded me of Muhamed Ali. Trump was nimble and able to seize the moment to put Biden in an untenable position. and I bet he had a lot of fun.

I know that I had a lot of fun watching him destroy Corrupt Slow Joe.

Here in Kansas we didn’t think Laura Kelly had a chance of beating Kris Kobach for Governor. She’s been just as awful as expected. I’m hoping enough Kansans recognize that Bollier is another idiotic Karen and don’t repeat the mistake.

She better not run into Liz.

On the other hand, Kansas hasn’t elected a Dem to the US Senate since 1932. Race may be close and Bollier may have cash advantage, but I don’t think this the year the streak ends, particularly since the GOP chose anodyne Roger Marshal rather than lightning rod Kris Kobach.

The despicable republicans who crossed the aisle to endorse Bollier should be publicly ostracized by the Kansas republican party. She has one focus only and when asked about the Patriot Act, she throught is had to do with tarifs.

What those (yes I’ll say it) traitorous republicans did in this election is the kind of dirty politics that gets people to turn off a party. Another reason I refuse to join a party.