“neither of these individuals had any contact with Vice President Biden, with Sen. Harris or any other staff member since testing positive or in the 48-hour period prior to their positive test results.” 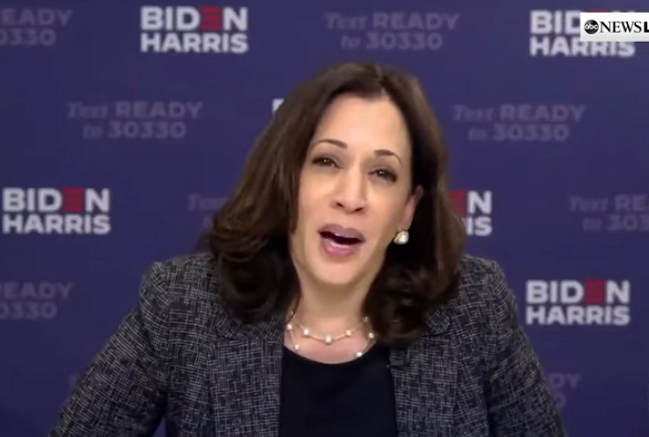 Campaign manager Jen O’Malley Dillon said “neither of these individuals had any contact with Vice President Biden, with Sen. Harris or any other staff member since testing positive or in the 48-hour period prior to their positive test results.” But O’Malley Dillon said Harris would suspend travel for several days “out of an abundance of caution.”

Harris and Biden spent several hours together that day through multiple campaign stops, private meetings and a joint appearance in front of reporters at an airport. They were masked at all times in public, and aides said they were masked in private, as well. Biden and Harris have each had multiple negative tests since then. Harris has had two tests since Oct. 8, most recently Wednesday, O’Malley Dillon said. Biden’s last announced negative test was Tuesday.

Its part of the plan. Its how she and Joe get out of being asked any difficult questions and simply sail through.

Exactly. They’re putting a Kung Flu “lid” on their campaign to avoid answering any questions, and so that the public can’t see how loathsome she is, and what a senile old dolt Gropey Joe is.

Put a lib on the Hunter Biden Ukraine, China and Russia stories by not showing up in public until after the election.

What campaign? Traveling around to address crowds of tens upon tens of bums who live in those parks anyway? That campaign?

Go hide in the basement with Joe you coward.

I believe the propaganda machine demanded Trump remove himself from the ticket when he got Wuhan.

Campaign manager Jen O’Malley Dillon said “neither of these individuals had any contact with Vice President Biden, with Sen. Harris or any other staff member since testing positive or in the 48-hour period prior to their positive test results.”

Right, anyone actually believe that? I don’t. Harris needs to quarantine herself for the minimum 14 days at this point to make sure she’s not an asymptomatic carrier of The Covid and is now spreading it to her staff and others.

And when does “48 hours” have a fucking thing to do with it. A person can be asymptomatic for The Covid long before that and be spreading it to everyone.

I want Harris, Biden and any staff and anyone else that might have come into contact with these Covid carriers to quarantine themselves for the minimum 14 day isolation period and then prove they haven’t been infected.

In my universe the Wu-Flu viri would do everything possible to avoid contact with her.

I saw an article in the Hill today saying that the Biden campaign’s plan is simply to run out the clock. It said they know they are winning, so they can just wait for it to happen.

It was a very one sided article and I wasn’t a bit convinced. Even for a campaign that really is winning, this is a stupid strategy.

Ah, the perfect excuse for Joe.
“Nowhere Man” will remain hidden until the election, and beyond…
Suppose he won, would he surface?

If Biden wins, they will explain that he is working with transition to set up the cabinet.

Of course, the cabinet will be selected FOR him and all will be willing to sign off with Harris that Joe needs to retire via the 25th.

Positive: past, probable, possible, or present? Is it viable? There are several Planned Pathogen choices, including HCQ+Zn+AZ early treatment, and the vaccine 2.0 (i.e. cloned antibodies) administered to Trump for high viral load or late stage progression.

Boy that is quite convenient timing, but Sundowner Joe having a town hall tonight might get asked about Hunter anyway.

Na, who am I kidding, it will never happen.

Question: Who was the first person to refer to Kamala Harris as a “super spreader”?

Without a doubt Trump’s fault. Why he probably sent an infectious spy to their lair just to cheat on the election.

Watch a body language expert and psychologist analyze this sleazeball during the debate with Pence: