“God help us, the God help you [European Union] … if there are four more years of Trump.” 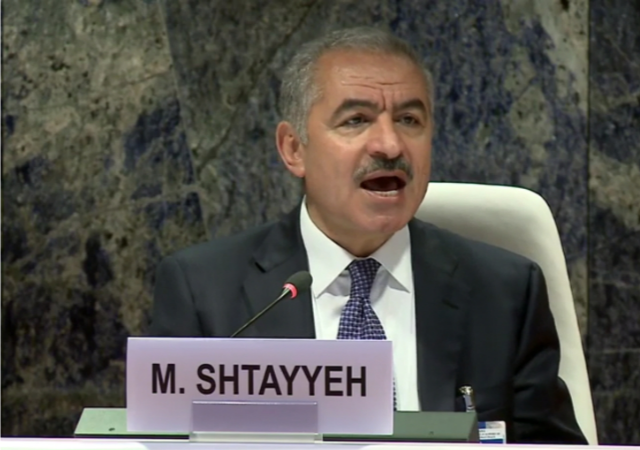 “God help us, the God help you [European Union] and the whole world if there are four more years of Trump,” the Palestinian prime minister warned a group of EU lawmakers on Monday.

“Trump has wasted four years of everyone’s time. The ultimate deal was not delivered. [Trump’s plan] was rejected by the Palestinians, the Arabs and Europe. The [United States] is just too biased,” Shtayyeh complained to his European partners.

The Palestinian prime minister, who serves under President Mahmoud Abbas, has long been rooting for a Biden-Harris victory in the upcoming U.S. presidential election.

“If Mr Biden is elected in November, we hope that it will be a totally different dynamic,” he declared in July.

The Palestinian prime minister said Tuesday it will be disastrous for his people and the world at large if President Donald Trump wins re-election next month.

“If we are going to live another four years with President Trump, God help us, God help you and God help the whole world,” Shtayyeh said Tuesday, repeating comments he made a day earlier in a remote meeting with European lawmakers.

The comments were earlier posted on his Facebook page.

The Palestinians have traditionally refrained from taking an explicit public position in American presidential elections. Shtayyeh’s comments reflected the sense of desperation on the Palestinian side after a series of U.S. moves that have left them weakened and isolated. (…)

Shtayyeh expressed hope that a victory by the Democratic presidential nominee Joe Biden would raise prospects for a peace deal.

Shtayyeh’s remarks reflect the deep-seated anger within the Palestinian leadership and its followers for the Trump administration. Palestinian rioters have been burning effigies and posters of the U.S. president ever since he took office.

Palestinian leaders rejected the Trump peace plan unveiled in January. President Trump offered land swaps between Jewish and Arab communities and a $50 billion economic development for the region. Palestinians responded to the generous offer of peace with rioting and ramping up terror against Israel civilians.

A  survey conducted by the ‘Palestinian Center for Policy and Survey Research’ just weeks after the unveiling of the Trump plan showed that 94 percent of Palestinians rejected the peace offer, and 64 percent favored “armed struggle in response to the plan” — a euphemism for terrorism.

The reality on the Israeli side could not be more different. The Israeli government and the people overwhelmingly embraced the peace plan offered by President Trump. The White House’s recognition of Jerusalem as Israel’s capital and the country’s sovereignty over the strategic Golan Heights have only endeared them to the current President.

A poll released by the Israeli TV channel i24News on Sunday showed that most Israelis favor President Trump in November 3 election. More than 63 percent of the Israeli respondents preferred President’s reelection, as opposed to less than 19 percent who favored his Democratic rival, Joe Biden.

“Almost half of correspondents think US Jews are ‘mistaken’ to support Democratic Party,” the pollsters found.

The i24News reported the opinion poll:

Answering the question, “which US presidential candidate do you think will be better for Israel?” 63.3 percent of respondents chose the Republican leader.

In contrast, Democrat candidate and former vice president Joe Biden came up with a mere 18.8 percent.

Moreover, 53.2 percent said they thought the Israeli right would be significantly harmed if Trump was not re-elected. A little over 21 percent replied that “Israel acts independently,” therefore won’t be influenced by a change in the White House.

In addition, a little over half of respondents (50.9 percent) said they believe that US-Israel ties will be harmed if Biden is elected, versus 43.5 percent who said that relations won’t be affected.

President Trump’s peace initiative has been accepted by the Israelis and a growing number of Arab states. The United Arab Emirates and Bahrain last month signed landmark agreements recognizing the state of Israel. President Trump believes that more Arab countries, including Saudi Arabia, may follow their example soon.

The Arab move towards peace has only enraged the Palestinians further. Triggered protesters rioted on the Temple Mount and Palestinian-controlled territories, burning the U.S., Israeli and Arab national flags. In a recent interview, the Palestinian ambassador to France claimed that Gulf Arab states “have become more Israeli than Israel.” The envoy accused Arab countries of revealing “their true face” as they abandon the ‘Palestinian Cause’ on the world stage.

The UAE’s Deputy Foreign Minister, Anwar Gargash, slammed the Palestinian envoy for his ungratefulness for all the generous material and diplomatic support they have received from the Gulf state over the decades.

“We have grown accustomed to the lack of loyalty and the ingratitude. We proceed toward the future confident in all our actions and beliefs,” said, supporting his country’s decision to normalize relation with Israel.

Of course they are not happy with Trump!
He has been kicking their arses for four years. He has stopped a lot of parasites from sucking the American taxpayer’s blood. He puts American interests first.
Four more years will be a blessing for us.

notamemberofanyorganizedpolicital in reply to Exiliado. | October 15, 2020 at 1:17 pm

Let’s begin in the Middle East.

CNN and its viewers were gobsmacked by the peace agreement Israel signed with the United Arab Emirates in September.

No surprise, really. For decades, CNN’s parade of “experts” assured viewers peace in the Middle East could only come about when Israel made an agreement with something called “a Palestinian state.” This “two-state solution,” the reigning wisdom of the foreign policy establishment for over 70 years, has ossified into dogma. And it was all viewers would know about if they watched CNN.

But TCM viewers have a far better education about this complex part of the world by watching “Lawrence of Arabia,” the classic 1962 Academy Award winner.

This historical drama follows the adventures of British officer T.E. Lawrence as he leads what history records as “the Arab Revolt” against a crumbling Ottoman Empire in the midst of World War I.

Aside from spectacular National Geographic caliber footage of some of the most breathtaking scenery in the world, the film’s insights on the creation of the modern Middle East do far more to illuminate the current situation than canned commentary from Christiane Amanpour or the other talking heads on cable news. We see how Western diplomats tried to export nationhood the same way a later generation of adventurers tried to export democracy to a tribal society.

While Lawrence fantasized about “the Arabs,” his Bedouin fighters were loyal to clans, not a national identity. As Bedouin leader Auda abu Tayi (Anthony Quinn) tells Lawrence, “The Arabs? The Howeitat, Ajili, Rala, Beni Saha; these I know. I have even heard of the Harif. But the Arabs? What tribe is that?”

His heirs insist those were not Auda’s own words or sentiments, but the fact remains allegiance to tribe or clan supersedes nation in that part of the world……

He says that like there would be something morally wrong with it.

notamemberofanyorganizedpolicital in reply to McGehee. | October 15, 2020 at 1:15 pm

It nice to see he does not believe in Allah.

Milhouse in reply to notamemberofanyorganizedpolicital. | October 15, 2020 at 4:33 pm

It may translate the same, but there is a world of difference and 1400 years of social evolution between their god and most other civilizations idea of god.

Islam is innately savage, claims it is a religion of peace are bald faced lies.

That may be so, but this is about the word. Their view of God may be different from ours, but we use the same word, which in English is “God”, and in Arabic is “Allah”. Again, ask any Arabic-speaking Christian or Jew whether they worship Allah, and they’ll confirm that they do. Arabic-speaking Christians will tell you that Issa is Allah; Moslems and Jews will deny it.

It may translate the same, but there is a world of difference

For that matter, there’s considerable difference between the Old Testament יהוה and the New Testament κύριος.

“considerable difference between the Old Testament יהוה and the New Testament”

I believe that those differences do a good job of showing how Islam did not evolve. Islam was created by a barbarian, pure and simple.

It pleases me that they see the day of reckoning coming.

Shroud getting to the front of the line like that. Seems the neighborhood is finally figuring out how the bully on the block is.

What an endorsement for Trump……. the Palestinians and the European freeloaders are longing for more Obama-Biden peace through weakness and appeasement policies.

While no one is beyond G_d’s help, they are pushing the envelope. But then, they are appealing to their god which for Islam and the EU is merging into one.

His phrasing puts me in mind of the old warning, “May God have mercy on you, because I won’t.”

To me it’s, “God will strike you down! But you better hope He finds you before I do!”

Pelosi won’t be veep. Not enough power to suit her.

The day will likely come when it will be necessary wipe out Islamic infestations all over the world.

Trump wins, peace in the Middle East, dictators and community leaders are deemed nonviable with progressive profitability and fading leverage.

I predict that it will be necessary to impose a lasting, permanent peace on rabid Arab squatters in Palestine.

He looks like a Muppet – except for the poison spewing from his mouth.

One more imperative to vote for Trump.

I’m trying to figure out what the problem is. Anybody have a suggestion?
.

If I were sitting there in the European Union hearing hall, I’d ask, “What you mean “Us” you Palestinian provacteur?”

The reason the Palestinians and Israel couldn’t have peace is the the leaders of the Palestinians conflict to maintain their power. They are warlords who need an enemy to fight. If they had peace they wouldn’t know what to do and wouldn’t be able to justify their corruption and fascistic ways.

Palestinian terrorist dissed Trump. Where is the downside?

President Trump is stepping on some delicate toes, it appears. Lot of squealing!

As if we needed another reason to vote for Trump.

The TRUTH of the matter is that the Palestinians DON’T want peace, and never have. They HATE Israel, and the Israeli people, and they would like to send them all into the Dead Sea. That is why, they have REJECTED so many actual peace deals. They are a people of hate, and there is NOT even 1 other Arab Country, that likes, or respects the Palestinians. THAT is why he is afraid of Donald Trump being re elected !

In addition, a little over half of respondents (50.9 percent) said they believe that US-Israel ties will be harmed if Biden is elected, versus 43.5 percent who said that relations won’t be affected.

43.5 percent are delusional. Biden will happily hold the door open on the cattle cars.