What a shock from an organization that once promoted Media Matters, has local councils connected to Planned Parenthood, and tweeted many political-related topics in the past. 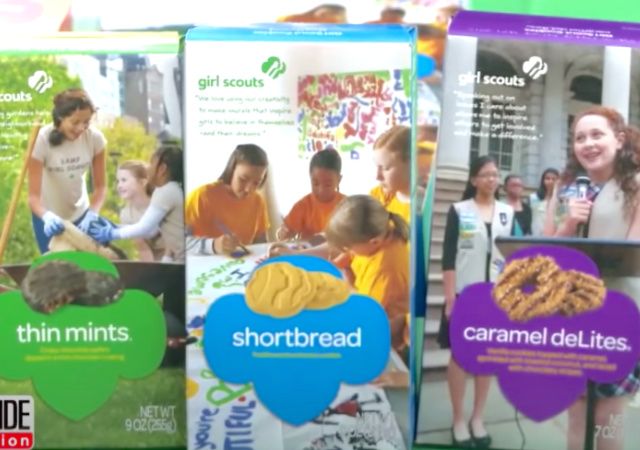 Girl Scouts, an organization that supposedly aims to celebrate females and develop girls into strong adults, deleted a tweet congratulating now-Justice Amy Coney Barrett on her SCOTUS confirmation because of the leftist mob.

The Girl Scouts then said the tweet “was quickly viewed as a political and partisan statement which was not our intent and we have removed the post.”

They reaffirmed it”is a nonpolitical, nonpartisan organization” that is “not red nor blue” but remains “Girl Scout GREEN.”

Girl Scouts of the USA is a nonpolitical, nonpartisan organization. We are neither red nor blue, but Girl Scout GREEN. We are here to lift up girls and women.

You want to go there, Girl Scouts?

How about these tweets, including discussions on how to run for local office!?

This isn’t shocking since Girl Scouts have a relationship with Planned Parenthood.

Do not tell me they do not have one. Look at the wording of the statement. The national office does not have a relationship with the infanticide company, but many local Girl Scout councils have one.

I gave up everything Girl Scouts when they promoted freaking Media Matters.

Look up who profits from those cookie sales. it’s not the girl scouts.

notamemberofanyorganizedpolicital in reply to 2smartforlibs. | October 29, 2020 at 2:21 pm

It goes to their pimps???

Remember a few short years ago where they were caught price gouging on their cookies in such places such as Tulsa?

I thought then to myself, yes it was probably the brainstorm of a so called CPA (no verification was ever provided) college teacher Girl Scout den mother……

Of course the Leftists DEMS would do that when they back child molesters…..

Maybe this was in the documents stolen from UPS.

The current purpose of girls scouts is to generate funds to pay the leaders salaries. Girls are heavily recruited to increase the sales force for the cookie sales. Approx 3/4 of the cookie proceeds go to cover salaries of the management.

No different from major brand “charities ” like United Way or the Red Cross.

Or the Clinton Foundation??

“…deleted a tweet congratulating now-Justice Amy Coney Barrett on her SCOTUS confirmation because of the leftist mob.”

Golly. It’s like that whole Leftist mantra of ‘diversity & inclusion’ is simply a cudgel of bullsh!t, or something.

I rabidly bought cookies even 10 years ago. They last all year in the freezer. Then the planned parenthood thing. I gave them up. Sad, yes. But I found Keebler makes a lovely thin mint alternative. And I have even found a nice substitute for my Samoa addiction (isn’t that a cultural appropriation name? just asking…). But even after finding those, I realized I just didn’t need that sugar in my life. I happily avoid the cookies now.
If GSA didn’t have the cookies, no one would know who they are. Sad but true.

In the name of proper culture, I stopped buying Samoans. I found Amish cookies but the wood was rough on my teeth.

Are Samoans made from authentic Samoans? Or did the Girl Scouts use white colonialist cultural appropriators instead?

It’s easy to find! it’s a town in the central valley in California. It goes under the Spanish name of Manteca.

I don’t know. But, if Samoan Cookies must be made of Samoans,

I shudder at the thought of what is in baby oil.

Or, what about neetsfoot oil? All those poor neets limping around with crushed feet, all in the name of a soft baseball glove. I find the whold idea horrifying.

Since they went woke, I refuse to buy their stinking cookies any more.

In response to this, my wife said that she does not buy Liberal cookies.

I miss the days when boy scouts and girl scouts got together to make brownies.

I wonder why the Wokestapo has not gone after the Brownies. Racial stereotyping, or cultural appropriation, or whateverphobia.

You can only get outraged about roughly a dozen new things every day. They’ll get there.

I got kicked out of cub scouts for eating brownies.

Yes indeed, they demonstrated conclusively that you don’t have to be a man to be a really ridiculous and just all-around piss-poor Justice. A great accomplishment. Up until the modern era, most of history’s most obvious failures have been men. But now just about anybody can get in on the act.

We are watching the end stages of a very deliberate effort to destroy all major cultural supports for both boys and girls. The only thing wrong with either the Girl Scouts or the Boy Scouts was that the organizations were good for teaching young people useable life skills.

Separating the sexes for a little while a time or two a week was a relief for the kids. I did not understand why this would be so at the time, but when my own children were in elementary school, I got a good look at their two, different cultures.

Now that the [gender of choice] Scouts have gone woke, what is even the rationale for the Girl Scouts’ existence?

The Girl Scouts had a total hissy fit meltdown when the Boy Scouts went co-ed in 2018.

Politically congruent (“=”). They are paying a steep, perhaps final price for embracing trans/homosexual male leaders that molested the scouts in their care.

Not really. The molestation cases are almost entirely exclusively from the decades before that accommodation.

Give up? Fall back? Perhaps kneel? This is why liberals have enjoyed unmitigated progress.

This action by GSA is the most obscene example of cowardice and partisanship I can recall. Is THIS gutless groveling the role model GSA wants to demonstrate to their young ladies and troop leaders? Do they WANT to become a neutered bankrupt organization like BSA? Are they sheep? I’m sorry, sometimes courage requires some risk. Sometimes appeasement leads to ruin (ask Prime Minister Neville Chamberlain).

we all knew Ginsberg was an extremely polarizing figure, made the GSA delete a tweet

Well, much like Mothers Against Only Certain Violence, them name is a cover, the agenda something else.

Non-partisan?! You can bet if Ruth Bader Ginsburg Jr. had been nominated for the Supreme Court the Girl Scouts would bring Twitter to its knees with the volume of congratulatory Tweets they would send.

The left has destroyed Girl Scouts and is close to doing the same with Boy Scouts. As usual, they do not create an alternative, just destroy.

Brilliant! When trying to develop women of character, teach them to go along to get along. Its always better to cave to the mob than to stick to your principles, isn’t it Ladies? Now, the Girl Scouts are just another organization on the trash heap of history. This will encourage competition, which is a good thing.l

A woman, a wife, a mother, a judge now justice… Feminine females that place principles before empathy are deplorable.

So, the left has thoroughly destroyed two great, formative organizations for children, the Boy Scouts and the Girl Scouts.

I guess I will have to homeschool their nature skills too.

I refused to allow my daughter to join the Girl Scouts. This just reaffirms my decision.

Girl Scout Law
I will do my best to be
honest and fair,
friendly and helpful,
considerate and caring,
courageous and strong, and
responsible for what I say and do,
and to
respect myself and others,
respect authority,
use resources wisely,
make the world a better place, and
be a sister to every Girl Scout.

Looks like they’re going to have to delete the “courageous and strong” line. And likely the “honest and fair” one also.

I haven’t bought Girl Scout cookies for about 10 years. I really hate the kind of women they promote to these girls. Like Margaret Sanger, if you can believe that! Hillary. No conservative women, of course.