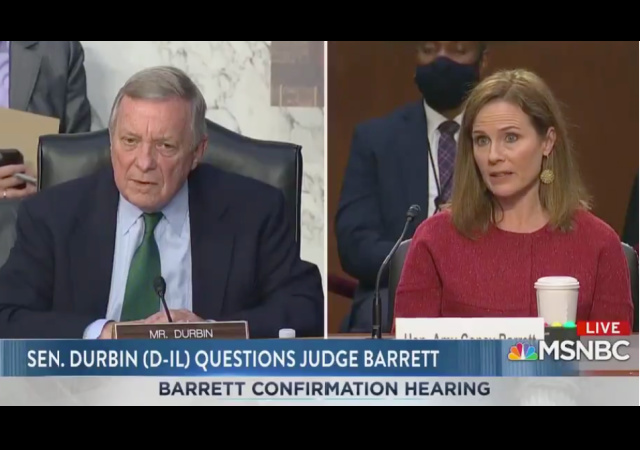 Hey, Sen. Dick Durbin. When you try to mansplain a judge’s opinion to said judge, maybe you should read it.

Durbin could not believe Barrett thinks felons should own guns! Except, you know, she didn’t.

Durbin grills Coney Barrett on the implications of her dissent in a case that would allow felons who haven't committed violent crimes to possess guns pic.twitter.com/aNCvPaFz1Q

In a feisty exchange, Durbin pushes Barrett on a felons/voting decision pic.twitter.com/nnTDTqPOx4

Barrett dissented in Kanter v. Barr. It is true she wrote “that the federal government and the state of Wisconsin had failed to show that their categorical bans could be applied against all nonviolent felons or that there was anything in Kanter’s history or characteristics that indicated that he was likely to misuse firearms.”

Did you read what I read? NONVIOLENT thugs. Her dissent did not apply to the “thugs” Durbin kept talking about.

Durbin represents Illinois. How shocking that an Illinois politician is looking elsewhere to blame for the gun violence in Chicago.

Turbin’s been nothing but a mouth piece for the left for a long time. Facts are not even in his wheelhouse.

notamemberofanyorganizedpolicital in reply to 2smartforlibs. | October 13, 2020 at 1:48 pm

During a press conference updating the recent mass shooting in Rochester that claimed the lives of two people and injured 14 others at a house party, a Police Captain unloads what we have been all thinking.

Why Democrats and Leftists are so easy to delude.

From the article here:

“Barrett dissented in Kanter v. Barr. It is true she wrote “that the federal government and the state of Wisconsin had failed to show that their categorical bans could be applied against all nonviolent felons or that there was anything in Kanter’s history or characteristics that indicated that he was likely to misuse firearms.””

But the refutation is in the cited NR article describing her opinion in that case:

“Based on her extensive marshalling and analysis of the historical evidence, Judge Barrett concludes that the Second Amendment leaves legislatures the power to prohibit dangerous people from possessing guns but that felons do not lose their Second Amendment rights solely because of their status as felons.”

So she doesn’t find the violent vs. nonviolent distinction in the statute (what Durbin objects to, thinking he’s caught her doing the legislature’s job) but in the constitution. And in cases of constitutional invalidation, it’s typical (this is a point subject to technical legal argument as I recall e.g. Obamacare case) that only the unconstitutional part is invalidated, not the whole statute.

Durbin doesn’t care that his point makes no sense. He knows that it will be picked up by the propagandists of the left anyway. It will be featured in his fundraising campaign and it will work.

Plus, bringing up garbage still takes time. And time is everything to them right now.

That we elect actual stupid people like this is an embarrassment. But when the likes of mazie hirono, corey booker, boofer whitehouse and the rest are exposed as actual low IQ dummies, it seems we are being set up by big donor money to collapse from within through idiocracy.

What she said, what the constitution says, what the law says are irrelevant to Durbin. He wants sound bites for his election campaign, nothing more.

You know, we wouldn’t need to do all this parsing of “violent Felons” vs. “non-violent Felons” if the legislatures hadn’t gone and willy-nilly made a bunch of non-violent crimes “Felonies”. The push to undo the loss of rights for a subset of Felons (voting, gun ownership) is primarily, in my opinion, due to the many convictions which just shouldn’t be felonies in the first place.

Why, it’s almost like the gun-grabbing leftists INTENDED to deprive everyone they could of their 2nd Amendment rights by turning things like paper-work errors into felonies.

Chicago doesn’t have a ‘gun violence’ problem, it has a ‘crime’ problem, and until politicians begin to deal with the crime as crime, it will continue to increase.

Chicago has a people problem; a problem with specific people (young black males) in particular parts of town (poor neighborhoods, especially on the south side). Beyond them, there is only modest violence in the city limits that is fairly common to other larger municipalities and would not create undue attention from the outside.

The line of attack that the Communists are using here is pathetically weak. Do they seriously believe that public opinion will be massively swayed in their favor by their attacks on the Bill of Rights and their pro-abortion religious preaching, something they have been doing for decades? I will wager they already have all the votes on those issues they will ever get.

coons must think amy had input as to whether or not the supreme court was going to take on the california vs texas case before she was even nominated. he must have some mystical powers.

It would have been a fine name for “professional” rasslin’.

Maybe he and Trump could have a shouting match in suits in the ring while wearing suits, ad then they could cut each other’s hair as fundraiser to pay down the national debt. LOL.

So, Senator, since you think abortion is a constitutional right, do you think a state legislature has the right to categorically ban all felons from having abortions, without having to make an individual showing in each case as to why that specific felon needs to be deprived of that right? If not, please explain why you think guns are different.

Even in the case of violent felonies, I don’t think states have the right to categorically deprive anyone who has been convicted of them of the RKBA; they should have to show in each case why that specific felon needs to be deprived of it. The mere fact of his conviction should not be enough. It may create a strong presumption, but there should still be an individual finding that the presumption applies in that case.

By the way, the reason states can deprive felons of the franchise is because that is not a constitutional right. Search the constitution and you will not find a right to vote. The franchise is a privilege granted by each state to its citizens, and it can set whatever conditions it likes on that privilege, except those specifically barred by the 15th, 19th, 24th, and 26th amendments.

Wait, an Illinois politician who doesn’t want criminals to vote? Wait, what?

Ooooh, someone described a “feisty” exchange.

As to felons having firearms, voting and such, it depends on the felony. There was a time, in Mississippi, when skipping out on a $25 restaurant tab was a felony.

While that is an egregious crime for which restitution is essential, it does not meet the standards for burning down a federal court house in Oregon. Hell arson isn’t even a crime in many states, if done in a mostly peaceful fashion.

Of course federal law is not state law, particularly under the guise of an emergency.