“Duquesne University is deeply committed to providing a campus and learning experience that is respectful, safe and inclusive” 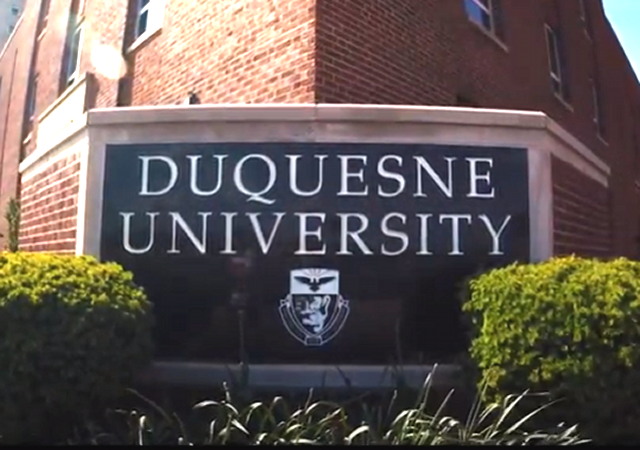 Duquesne University Education Professor Gary Shank has been on leave since mid-September for using the N-word in a class discussion about why the word is inappropriate.

Shank gave students permission to use the word for the sake of their discussion, and this set off a firestorm.

Now the school has terminated his employment.

Duquesne University on Wednesday fired an education professor for “serious misconduct” less than a month after suspending him for his use of a racial slur in a virtual lecture related to race.

“We have 30 days to grieve the termination and certainly will do so,” Warner Mariani, attorney for the embattled professor, Gary Shank, told the Tribune-Review.

Shank — who’s been teaching for nearly three decades and a faculty member at Duquesne since 1997 — had been on paid leave since Sept. 11, when video was posted to Twitter of the portion of his Sept. 9 virtual class that drew backlash from some students, alumni and community members. University officials placed Shank on paid leave “moments after” learning of Shank’s use of the slur multiple times during a presentation in his course on educational psychology.

The prompt suspension was followed by an ultimatum, with the university giving Shank a chance to resign. His attorney said at the time that Shank had no intention of doing so.

The statement from a school official couches the decision in the safety of the students. It’s apparently very important to keep students safe from certain words:

“While Duquesne will not comment on the personnel matter, it will confirm that it takes seriously Dr. Shank’s in-class conduct on Sept. 9, 2020, which included repeated use of a racial slur,” Gabriel Welsch, the university’s vice president of marketing and communications, said by e-mail Wednesday afternoon. “Duquesne University is deeply committed to providing a campus and learning experience that is respectful, safe and inclusive for all members of the Duquesne community. In fact, the University recently announced an action plan intended to examine and enhance how we create an inclusive climate at Duquesne.”

The Foundation for Individual Rights in Education has gotten involved here. Shank is planning to appeal the school’s decision, with their help.

Duquesne University issued a termination letter to professor Gary Shank this morning. Shank had been on leave since controversy erupted in September over his use of the N-word during a class discussion about why using it is considered inappropriate.

Shank and FIRE have argued that the professor’s use of the slur was pedagogically relevant and protected under Duquesne’s promises of free expression and academic freedom. The AAUP also expressed concerns about Duquesne’s treatment of Shank.

Last week, FIRE wrote to the Department of Education about this matter, alerting the Department that Duquesne appeared to be substantially misrepresenting the nature of its academic program — and violating its promises to its accreditor — by promising rights it does not provide in practice.

Morey points out that Duquesne is essentially violating its own policy:

As we wrote to Duquesne last month, universities that promise academic freedom must allow faculty to determine how to discuss controversial material in their classrooms, provided their discussion does not violate any other rule or law:

Under any basic conception of academic freedom, the choice of whether and how to confront upsetting material in a pedagogically-relevant context is left to faculty members, not administrators. Duquesne promises this right to its faculty and must not violate those promises. Doing so casts an unacceptable chill over the rights of Duquesne faculty who have relied on the institution’s promises and exposes the university to considerable legal liability.

Irresponsible reporting from the media does not help. Countless outlets are reporting this story without explaining why the word was used or that it was an academic discussion about the word, not just a reckless use of the word.

The left is intent on pushing the narrative that ‘systemic racism’ is a big problem in America. It is being done for purely political and cynical purposes.

If lives are ruined in the process, so be it.

notamemberofanyorganizedpolicital in reply to Whitewall. | October 10, 2020 at 5:49 pm

ray in reply to notamemberofanyorganizedpolicital. | October 10, 2020 at 9:06 pm

And WTF is FIFT? Have you forgotten your high school composition? Give the full expansion of the acronym before using it by itself.

They are both idiots and cowards, sue, sue, sue.

The Seattle Seahawks fired pre-and post game commentator Dori Monson for Tweeting that being able to go to Olympia and change the gender on your birth certificate was not based on science.

Another reason I gave up football, not coming back as I hope millions will not

Move to China and see what camp they put you in..

I went to visit my 90+ year old father today, he had football on, I steered him to Time Team stuff instead.

There’s twenty years of Time Team out there. Should keep him busy for a while. May I recommend the two Turkdean episodes?

I suggest “Drain the Oceans” and “World From Above.” Life is more than just “Trailer Park Boys.”

The best part of retirement is that I can say what I want with no repercussions.

Now can’t have college snowflakes going to pieces, they need to get through to graduation to become real adults and in debt for a hundred thousand dollars to this Leftist Seminary.

notamemberofanyorganizedpolicital in reply to Skip. | October 10, 2020 at 5:51 pm

Are they going to fire basketball coaches if their players utter said word?

As an undergraduate I heard a professor say “deoxyribonucleic acid” in front of students!!! I was triggered!!! Where do I go to get this science-denying racist fired?

I guess you could say Duquesne is stingy, miserly, or begrudging in its support for academic freedom.

Seems to me there’s another synonym I could add in there, but I’m having trouble coming up with it…

And you better not if you know what’s good for you. Stifle it!

people afraid of some letters in a certain order.
even here its not allowed.

There is no right to feel safe, especially from words.

Most RAP is foul and ignorant. I flat out refuse to be exposed to it.

And I’m sure there would have been no repercussions at all if he had been discussing the inappropriateness of “k*k*” or “sp*c” or any other derogatory term used to refer to theoretically “white” people.

These people obviously are not fit to live in the real world. Just put them in a padded cell with rounded corners and no sharp objects.

This is being totally misreported. Professor Shank was not fired for using the N-word as a slur. He was fired for gross cultural misappropriation. Only a specific class of people are allowed to use the word in any way, shape or form. Shank was fired for the crime of being a White man speaking a language reserved solely for Black Americans. This is not the first case of cultural misappropriation the Professor has been caught committing. He has been seen on several occasions eating a burrito as well.(sarc)

He should have donned a backwards baseball cap, baggy pants and multiple gold chains, and, told the students that he was pretending to be a rapper, for the duration of the lesson.

Of course sideways! That’s how it comes out of the box!

Not backwards. 42.4 degrees off from straight ahead. That be keepin’ it real!

I use a language that is closed off to virtually all black students with studies majors. It is a form of English that utilized words of more than three syllables. If I think somesone does not understand me, I ask the question, “Was I clear?”, or, “Did you understand that?”, instead of “you feelin’ me?”

Do institutions like this cater to the left?
It would seem to me that any bias like that would be a bad marketing decision by driving others off.

notamemberofanyorganizedpolicital in reply to snowshooze. | October 10, 2020 at 5:54 pm

THEY ARE THE COMMUNIST LEFT.

snowshooze in reply to notamemberofanyorganizedpolicital. | October 10, 2020 at 7:39 pm

Well, I guess.
Most would probably figure it on their own, but they really should put that in print.
We are Communist’s…

We as a society lost when we let the PC culture take that word of any word form us.
Capt Picard-When the first link of the chain is forged the first speech censured the first thought forbidden the first freedom denied chains us all irrevocably. The first time any man’s freedom is trodden on we are all damaged.

Why is the university being so niggardly in its judgment?

I guess their cinematography class won’t be watching “Blazing Saddles” this semester.

One of the many brilliancies of that movie was how it robbed the word of its power as a slur, precisely because it was used so commonly and casually, and in ways that reflected on the speaker much more than the spoken to.

I observe that there is no hope for American society and civilization, if these infantile and totalitarian twits continue to dictate the constraints of lexicon and discourse to everyone under the Sun, according to their despotic whims and sensibilities. Every subject will eventually be deemed to be “offensive,” “inappropriate” and a violation of “social justice” ideology, given sufficient time.

This is about exercising control over people, by reminding them that a steep price will be paid, by those who are deemed to step out of line with Leftist orthodoxies.

notamemberofanyorganizedpolicital in reply to guyjones. | October 10, 2020 at 5:57 pm

Cut all their money off and seize all their assets.

JusticeDelivered in reply to notamemberofanyorganizedpolicital. | October 10, 2020 at 6:38 pm

What we really need is a means to replace school administration over things like this.

At one point in my career, I worked on acquiring troubled companies. I was often directed to fix those companies, and that involved culling bloated bureaucracies.

After I was done, another person was brought in to restore the acquisition to profitability. As a rule, people did not understand that they would have all lost their jobs without this process.

Monty Python did it better, and first.
“He said Jehovah!”
https://www.youtube.com/watch?v=FQ5YU_spBw0

Reminds me of the stoning scene in Life of Brian.

What happened to “Sticks and stones may break my bones, but words will never hurt me”?