The suspect has a long rap sheet. 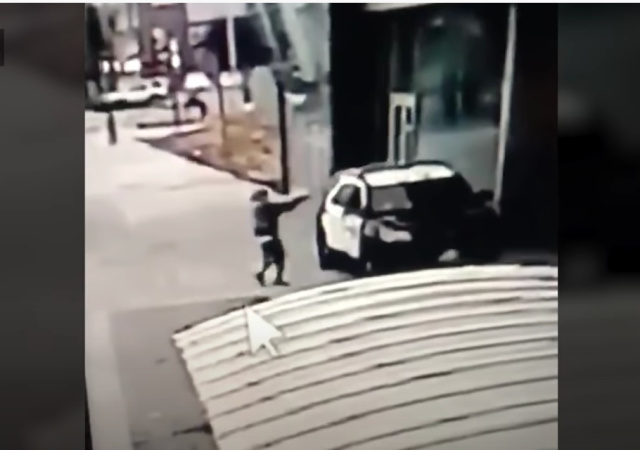 Deonte Lee Murray, 36, of Compton, is scheduled to be arraigned Wednesday afternoon on two counts each of willful, deliberate and premeditated attempted murder of a peace officer and possession of a firearm by a felon, District Attorney Jackie Lacey said.

Lacey expressed her best wishes to the injured deputies and said, “They became victims of a violent crime for one reason: They were doing their job and they were wearing a badge.”

The two deputies sustained wounds to the face and head on September 12 near the Compton Metro station. They received surgery and have left the hospital.

Police took Murray into custody on September 15 after a standoff in Lynwood on unrelated charges.

Sheriff Alex Villanueva said that they suspected him of an armed carjacking and not the shooting at that time:

Murray was previously charged with one felony count each of carjacking, second-degree robbery and assault with a semiautomatic firearm. The charges include allegations of association with a criminal street gang, discharging a rifle inflicting great bodily injury and personal use of an AR-15. He pleaded not guilty.

Capt. Kent Wegener said Wednesday that Murray led investigators on a pursuit before his arrest, during which he threw a pistol from his car. He said a ballistic comparison revealed that the .40 caliber pistol was the same weapon used in the attack on the deputies, and it was linked to Murray through forensic testing. The gun was loaded with eight rounds, five rounds short of its full capacity, he said. And five rounds were fired at the two deputies.

Murray appeared in court on Wednesday:

At a court appearance Wednesday, Murray pleaded not guilty to the charges. Both his attorney, Jack Keenan, and the prosecutor, Jack Garden, asked that media requests for photographs and video footage of Murray in the courtroom be denied, citing the ongoing investigation and $300,000 reward for information.

“His identity is a material issue in this case,” Shultz said, noting that it “would compromise the defense, the prosecution or both” to visually ID Murray at this time.

Has that sick hustler Kamala Harris announced a defense fund for the wanna-be murderer?

This is what you get when long rap sheets don’t result in life sentences. Whatever happened to “three strikes and you’re out?”

A more important question is how did a convicted felon get a hold of a gun in heavily restricted gun controlled California?

I thought gun control laws stopped these things from happening.

Deonte… call me racist, but… i don’t think he’s a Swede.

Call you a racist? Ha! The Dems already beat me to it!

If one considers that virttually everything is racist, or sexist, no big deal.

Gee, I wonder why? Another Amish gang member I suspect. Beware those Scandinavians!

The shooting was not an ambush.

Agreed, an ambush implies that the victim was lured into a place where the attackers were waiting. As far I know, there is no evidence that Murray had prepared the killing ground and somehow enticed the deputies into the crosshairs.

But it’s a rather nitpicky correction, don’t you think?

The difference is nuanced but significant. Rather than waiting for his victims to come to him, he demonstrated an audacity to assault them in their space (“vehicle”). We’ve seen this with antifa setting up traps for motorists (e.g. officers, public), and some, select black lives matter invading people’s neighborhoods to intimidate them (a la KKK), and occupy before them.

thats assuming this was not a normal park spot for cops in the area and he had not been waiting for them.

A surprise attack from a concealed position?

He was most definitely concealed by way of his approach in the blind spot of the officers in the car.

Multiple felony charges and felony convictions – but no mugshot. Isn’t that interesting? A lengthy rap sheet, but Top Secret. All those online resources that can search anywhere and find anything, but this thug is the invisible man. What a public service Google/facebook/etc provide.

“The Biden campaign announced that Joe Biden wants to ‘bottle’ some of the ‘social justice’ fervor of the moment, and accordingly will name Deonte Lee Murray, a Los Angeles man charged with the shooting of two Los Angeles police officers (the ‘enemy,’ Biden helpfully added) as his choice to be Attorney General of the United States, should he be elected President.
“Deonte shows that Democrats possess the courage of their convictions,” said Biden. “This young man chose to take decisive action to address the scourge of racist police hunting down and murdering black men. He shows the qualities of character that I want in an attorney general.”
Eric Holder, former U.S. Attorney General under Barack Obama, expressed his approval of Biden’s choice, stating that he is confident that Mr. Murray will protect “my people.”

Once again, parody of Democrats and what Democrats actually say are not necessarily mutually exclusive.

Pretty amazing police work, tracking this idiot down. How dumb is he, not only to commit this crime, but, to not throw away the gun?

Well, he did throw away the gun eventually — while the police were chasing him and saw him do it.

So, yeah, that was dumb.

He must have really liked that pistol.

He must have really liked that pistol.

Not so sure about the quality of the police work. I would think whatever gun was used in the shooting of the deputies would have been the most wanted handgun in the entire state. The fact that it took about two weeks to link the recovered gun to the shooting would not make me feel too good if I was a California resident.

This is a total scam of an arrest or at least not the actual shooter !
Look at the picture – the top of the shooter’s head is not as tall / high as the roof of the car, not even as high as the top of the window – The guy arrested is supposed to be 5 ft 6″ 220 lbs – the shooter can’t even be 5 ft tall in the pictures !
There is a great deal of info at https://www.thegatewaypundit.com/2020/10/weird-man-arrested-ambush-shooting-two-la-deputies-taller-shooter-video/

An update at the Gateway Pundit post indicates that the police vehicle in question was an Explorer, a taller vehicle than a sedan, and so the suspect’s height reported at 5’6″ would be consistent with the video of the shooting.

GP is a fucking idiot.
no explorer ever made was police ready.
the ford edge is what is used.
edge is quite a bit bigger than an explorer.

This sure looks like a modified Explorer to me…
https://www.ford.com/police-vehicles/hybrid-utility/

And, the guys over at Second City Cop grouse a lot about how bad their Explorer police cars are.

yeah I screwed up its the edge NOT used as PI.
so my apologies.
still, statement about GP is accurate.

fwiw 2020 model year is based off the explorer not escape.
iirc they went to all wheel drive with the rears being primary unlike escape where fronts are primary.

grr I was looking at repair stuff on escape and keep thinking about that and typing that just ignore all my posts here about that.
down in weeds of manual on evap circuits on 2013 escape,

The racist white police officers should be arrested for obnoxiously and recklessly placing themselves in front of a firearm, while the man was innocuously practicing target shooting in an empty alley.

College bound and gentle, and above all else affirmatively privileged.

Are they showing his birthday party pictures?

Definitely a white supremacist who exercised his 2nd amendment right to buy that gun legally at a gun show I’m sure.

Also, someone we should grant voting rights back to, so Dems can promise him leniency and a pile of cash for his vote.

Thank God he’s off the street.

Any adult who commits a violent act with a weapon — outside of self defense — should be locked up at least until they are too old and frail to be much of a danger.

If you are a legal adult and you don’t know right from wrong and have such a stunted conscience that you would willfully harm someone outside of self-defense, then you don’t deserve the right to create a long rap sheet.

I look at $$, and cost benefit. There is no benefit in locking up people like this. They are not likely to be rehabilitated. And money spent on such is a huge waste, it would be better spent on those who might be saved.

kudos to the officers who captured this pos and brought him in alive–lord, the self-control and composure it must have taken not to waste the s/o/b on the spot–kind of contradicts the whole ” cops murder blacks with impunity ” narrative so beloved of blm/antifa/leftist idiots–excellent job, ladies and gentlemen of law enforcement

As much as I would like see the POS bite the dust, circumstances of this case call for due process.

Rioters are a different animal, if they are putting others at risk with their actions, they should be subject to immediate termination. If there is some nuance of law standing in the way of that, then it should be changed. It seems like SYG would cover this situation.

Once theyre sure this is the guy: wood chipper.