Biden’s SCOTUS Strategy: Advice From ‘National Commission’ to ‘Reform the Court System’ Since it’s ‘Out of Whack’

Biden’s SCOTUS Strategy: Advice From ‘National Commission’ to ‘Reform the Court System’ Since it’s ‘Out of Whack’

Just admit it, Biden. You want to pack the court. 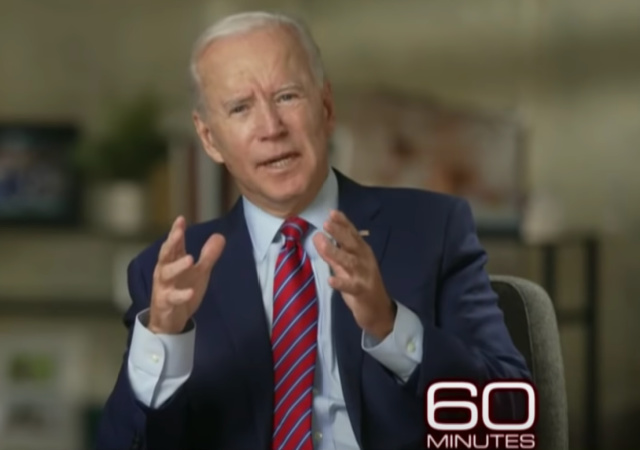 Democratic presidential candidate Joe Biden told CBS News’ Norah O’Donnell that he wants to put together a “national commission” to give him advice on “how to reform the court system.”

Biden claimed the system is “getting out of whack.”

In other words, Biden wants to pack the court, but deflect blame to others if it fails. I can already see it. “The national commission made up of bipartisan people told me it was going to be okay!”

“If elected, what I will do is I’ll put together a national commission of, a bipartisan commission of scholars, constitutional scholars, Democrats, Republicans, liberal, conservative,” Biden said. “And I will ask them to, over 180 days, to come back to me with recommendations as to how to reform the court system, because it’s getting out of whack, the way in which it’s being handled.”

“And it’s not about court-packing,” he added. “There’s a number of other things that constitutional scholars have debated, and I’d look to see what recommendations that commission might make.”

“So you’re telling us you’re going to study this issue about whether to pack the court?” O’Donnell asked.

“No, whether, there’s a number of alternatives that go well beyond packing,” Biden said.

“This is a live ball,” O’Donnell said.

He concluded by saying “The last thing we need to do is to turn the Supreme Court into a just a political football, whoever has the most votes gets whatever they want. Presidents come and go. Supreme Court justices stay for generations.”

What do I think?

Pack the court, Democrats. I dare you. You will regret it as much as you’ll regret changing the rules on judge confirmations.

Did Sniffin’ Joe get that approved by President Kamala – a Key Contact for Money Bribes to the Biden Crime Family?

Tucker had a good piece on this the other night

So he will take advice from “scientists” on COVID and from a “National Commission” on the Courts.

Just what will he do as President.

Sounds as though Biden will farm out the actual work of being President. When he was Vice-President he seemed to have farmed out bribe taking to Hunter.

Scientists are the new “priests” of the heathen religion of “Climate Change. The theme of Sinners in the Hands of an Angry God” is centuries old. Sadly, some scientists are heretics. Just ask Scott Atlas.

“Ladies and Gentlemen, I promise you that as President my first decision will be to make no decisions. All decisions will be made by swamp dwellers I will give you a Government of the swamp by the swamp and for the swamp”.

It may not be Biden’s exact words. But that’s his message.

“It will be a bipartisan commission of scholars, constitutional scholars, Democrats, Republicans, liberal, conservative… and I get to define who is conservative, who is a scholar and who is a Republican.”

This is the kind of “fair and balanced” study commissions Democrats create.

A clown answer from a clown candidate. Good ole 10% Joe.

When you say something needs to be ‘reformed’ suggests there is something wrong with it. What exactly is ‘wrong’ with the Supreme Court that requires ‘reform’ except that DJT named the successor to RBG? I’m not a fan of amending the Constitution but an amendment setting the membership of the SCOTUS at nine might not be a bad idea.

He’ll form a commission to rubber-stamp the plan that has already been written.

With such “LEADERSHIP” as this …

notamemberofanyorganizedpolicital in reply to CKYoung. | October 22, 2020 at 3:35 pm

Stahl should have retired from walklin’ the street DECADES BACK1

I have absolutely no doubt that Joe will follow through on this if he is elected. The commission will be made up of entirely Biden voters with various (R) and (I) labels to make it appear fair, there will be a number of Important Private Meetings and the occasional Show Meeting With Press to show how hard they are working, before the commission produces a document that in essence says “Whatever Joe wants to do is fine.” Of course, the document will have been written up before the commission members are selected, and every one of them will have agreed to it before they start.

Sure the Federal court system is out of whack. Since when do Hawaiian Federal judges get to issue nationwide injunctions like they were distributing Halloween candy? Or act as judge, prosecutor, defense attorney, trial and jury in a criminal case (Judge Sullivan)? Or legislate from the bench (Chief Justice Roberts)?

Frankly, most Federal judges belong in jail themselves, not sending people away.

Judicial tyranny has been getting worse last 20 years, latest Roberts agreeing with the Pa Leftist court to extend voting 3 days after when the Constitution says it’s up to the state legislature without a judge to even have a say about it.

Of course the biggest problem is the politicization of Justices and of the nomination and approval process. Who was in the center of that politicization? None other than Joe “the Father of Borking” Biden. He’s the last person I’d trust to “fix” it (unless you mean “fix” as in “fixing a fight” or “fixing a horse race”).

What is it with Dhimmi-crats and their stupid, rubber-stamp “commissions?” It’s so utterly transparent and Soviet, this method of using fig leaves to attempt to cover and rationalize the manifest totalitarianism of their agenda.

The ‘alternate reality’ insanity from these people has gotten way too old and rotten.

They need a brutal reality check.