Biden: Voters “will know my opinion on court packing when the election’s over”

Biden: Voters “will know my opinion on court packing when the election’s over”

And there you have it 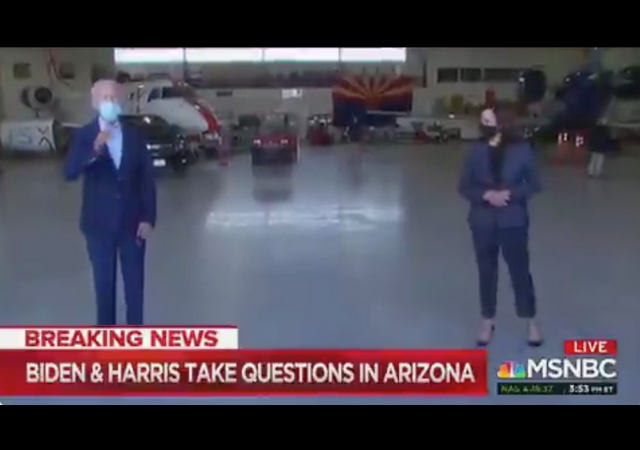 Democrat Presidential candidate Joe Biden and his running mate, Sen. Kamala Harris have purposely avoided answering whether or not they’d pack the Supreme Court if they won the election.

Thursday, reporters asked Biden, yet again, wether he would pack the courts, to which Biden responded that voters “will know my opinion on court packing when the election’s over.”

.@JoeBiden: Voters “will know my opinion on court packing when the election’s over!" pic.twitter.com/hRH1X7rqoD

“You’ll know my opinion on court packing when the election is over. I know this is a great question and I don’t blame y’all for asking, but you know the moment I answer that question the headline in every one of your papers will be about that other than focusing on what’s happening now. The election has begun. There’s never been a court appointment once the election has begun. 4 million or so people have already voted. They’re denying the American people the one shot they have under Constitutional Law to be able to have their input.”

Not that it changes any minds on the left, necessarily, but this is awfully reminiscent of Speaker Pelosi’s now infamous line in justification of ramming through Obamacare — “we have to pass the bill to find out what is in it.” Hard to see how that plays well with anyone in the middle, especially when it comes to one of our three branches of government.

With her pack-the-court dodge tonight, Kamala and Joe have dodged the question 10 times: pic.twitter.com/CkOCT5MZMv

And this ad put out by the Trump campaign, highlighting former Democrat presidential contenders and their thoughts on packing the supreme court is about as good as it gets:

This needs to happen:

Today @JoeBiden insulted voters by wimping out on the court-packing question, all but admitting that he would radically change one of the three branches of government without having the guts to actually say so. /1 https://t.co/cGAc8GAkac

This makes it all the more important now for Biden to release his list of #SCOTUS nominees since he's now tipped his hand that he will pack the Supreme Court if he wins in November. /2

Last I checked, the entire purpose of a campaign was to give voters a chance to scope out what each candidate would do, should they win the public trust. But it’s not like we have a press corps willing to push this issue any further or explore why an overhaul of an entire branch of government and a refusal of a PRESIDENTIAL CANDIDATE to answer a question about the overhaul of an entire branch of government might be a tad worrisome.

Biden himself doesn’t what his own opinion from day to day unless someone tells him.
The other day his wife had to take him gently by the arm and guide him like you would a dementia patient, which of course, he is.

In what world does any Presidential candidate get away with this? Democrats have totalitarian aspirations to control every aspect of our lives. This evasion proves it.

Voters “will know my opinion on court packing when the election’s over!”

Translation – “I don’t know what it will be, but you won’t like it.”

Oh, he knows, that’s why he won’t tell us

No, he will either be told by Kamala Harris, or more likely she will push him aside, perhaps with Killerary’s assistance and she will tell us they are going to finish what Obommer started.

More likely, Trump will win again, and they will directing riots, while we will have to neutralize the threat.

We have to pass it to see…oh what’s the rest of it….

You know, the thing.

Sundowner Joe only knows what he will say when someone tells him what to say, no one told him yet if the courts will be packed.

This has gotta be one of the stupidest campaign statements by any candidate. Good thing the undecideds will never hear it – thanks to the MSM

There really isn’t any doubt that quid pro joe will do as told.

No Joe – As Mike Pence said, we know their position. They want to pack the courts.

I’m going with the option that Joe loses in Nov and we don’t have to find out anything.

“I’ll have to enact my plan to find out what;s in it!”

Do you know ANYONE and I mean ANYONE who voted for Trump last time, but is going to vote for Biden this time?

The only thing Joe has going for him is the media has been running non stop negative coverage on Trump for 4 years. That is his singular greatest asset.

Got to correct you, not that I want to defend that senile scumbag Biden. He didn’t run against Hillary. That being said, I’m sure he was planning to, but was told in no uncertain terms that the Democrats would destroy him if he tried.

That says it all, he is planning to pack the courts but can’t afford to say it aloud.

What’s the matter, wasn’t he wearing his wire so someone could tell him what to say?

There’s never been a court appointment once the election has begun.

So Slow Joe has never heard of John Marshall? He’s even slower than I thought. Marshall was one of John Adams’s “midnight appointments” made after the 1800 election had ended (which, of course, was also after it had begun) and Adams had lost. Federalists still controlled the Senate and most of Adams’s appointments were confirmed, though in Marshall’s case after some delay as some Senators were hoping Adams would make a different appointment if they dragged their feet.

Interestingly enough, the Federalist lame-duck Congress also passed the Midnight Judges Act reducing the number of SCOTUS Associate Justices, in an attempt to prevent Jefferson from being able to appoint a new Justice when a vacancy should occur. Good times.

Of course he is for it… He knows it is a big issue with many voters and if he says “no” he does not support that, then he loses support from the radical left. If he says “yes” he keeps the radicals and the sane Dems and fence-sitters will surely vote Trump. So he hides from the issue.

Just the kind of person you want running things.

Same with his list of potential SCOTUS picks. He can’t say it without blowing up the campaign. Imagine a court with Keith Ellison or Ben Crump on it.

It may not be as simple as many think.

Joe may be against packing the court, but knows there would be a Progressive backlash that would cost him votes. (The optics of being at odds with his veep pick would also be bad.)

Joe may be for packing the court, but knows that might cost the votes of some moderate Dems (if there are any left who aren’t voting for Trump).

So he’s between a rock and a hard place either way.

The only thing Basement Biden will be doing packing his adult diaper.

Biden will never assume the Presidency even if he wins (steals) the election. He’ll resign before the inauguration as he is simply too dangerous to his own party.

What’s her name will assume the office and we’ll have to discover her policies after the election.

Only the latest, gazillionth reason not to support this tottering, would-be caudillo, and, the rest of his totalitarian, destructive Dhimmi-crat agenda.

Which States have the highest rates of unemployment?

MA is Charlie Baker, an R.

Imagination quails at the thought of what the commonwealth would be like right now were Deval Patrick (D) still governor.

In higher offices, Mass (R)s are simply Dems that couldn’t get the party nod and who’s Gov. doesn’t change that the state’s been dominated by Dhimmi-crats for generations

Of course, Joe and the ‘Ho will pack the Court. The reasons they won’t say so openly are:

• pro-packing Democrats know how to read between the lines when their candidates make campaign claims.

This has to be the dumbest thing ever said during an American campaign. Hillary’s promise to put coal miners out of work was criminally dumb, but it at least was a coherent statement of policy. But Joe can’t even decide if we’ve always been at war with EastAsia.

Though perhaps the most ridiculous part is that I think all Americans finally realize that what Joe thinks about anything is of no consequence whatever. Any Biden administration decision of any more moment than the lunch menu will be made by somebody else.

The sole interesting thing here is that apparently even Biden’s handlers don’t seem to know which way to jump on this. Is court-packing a vote winner or loser? As usual what they promise and what they actually deliver have nothing to do with each other, but an obvious punt even on a vacuous campaign promise impresses nobody. Clinton would have had focus groups working on it right now.

We all know that a clear position is both a vote winner and a vote loser. Either way, a portion of the Democratic voter pool will be upset. Pledge to add Justices, and “moderates” may balk. Pledge not to, gain the “moderates”, but the base may not vote at all. And it can’t be done without control of both House and Senate anyway. So Joe is waiting until the results are in, and if he has control of both House and Senate, he will go for it. In the meantime, all the Democrats will boycott the ACB hearings in order to lay down the marker that they consider her nomination illegitimate, which lays the political groundwork for adding Justices later. My guess is they will add 2 Justices to compensate for Merrick Garland and ACB, which will also match the number of regional circuit courts that have jurisdiction over States.

The final sentence is simply untrue. The American people have had more than “one shot” to have their say. They gave Republicans control of the Senate during Obama’s second term, and they have subsequently elected Trump, and kept Republicans in charge of the Senate, actually increasing their majority. The people have had their say, and they put Republicans in charge of this phase of American history. They have a duty, I say they should do it.

“I will let you little pissants know when I’m damn good and ready. Now shut up and get back to work!”

Well, if it tracks like the previous “We have to pass the bill so you can find out what’s in it.”, every dire criticism n prediction from the opposition — the Feckless-R’s — will turn out to be true. And then some.

I don’t work for YOU!

Biden’s refusal to answer tells you all you need to know. He will add Justices to the court if he has both the House and the Senate.

My prediction for the ACB hearings – they will be a total snooze fest. The Democrats will boycott the hearings totally under the excuse that the nomination is illegitimate, but the real reason is they don’t want the possibility of Kamala Harris getting angry and saying something during the hearing that could damage her election chances. So, ACB will be questioned entirely by Republicans and the Media won’t cover it at all.

“Biden: Voters ‘will know my opinion on court packing when the election’s over’”

We know it now, s*&#head. Your opinion is President Kamala Harris.’ Now sit down and gum down your Gerber’s applesauce.