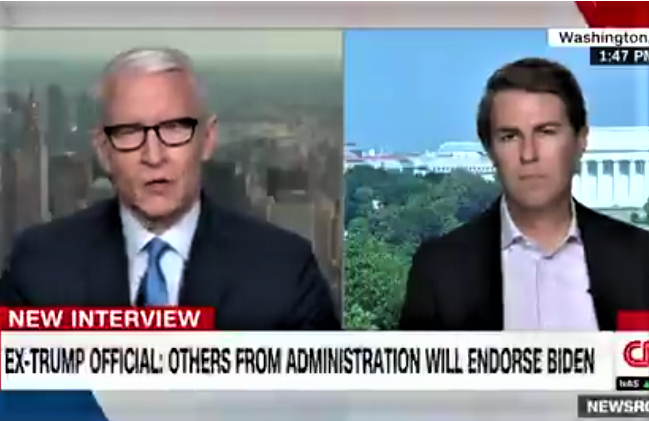 In 2018, the New York Times published an op-ed entitled “I Am Part of the Resistance Inside the Trump Administration.” The piece made a splash at a time, with speculation rampant as to the identity of the person the NYTimes described as a “senior administration official.”

The ‘Anonymous’ writer turns out to be Miles Taylor, a former chief of staff during Kirstjen Nielsen‘s brief stint as Homeland Security Secretary.  Never heard of him?  No worries, no one else had, either.

LOL – not exactly the big name the Resistance Media was hoping for https://t.co/sYbgCTBlKW

lol. I’ve never heard of this guy. The DC media said he was an insider stopping decisions.

They embarrass themselves again. https://t.co/Ge2kn7s6GB

NY Times deceived the public into thinking this was a truly big name in the administration, led to months of anti-Trump hype, dishonest people who manipulate the news, how many of their other "senior administration" sources are similar BS? https://t.co/qMDcL8a4yf

Since leaving government, Taylor joined CNN as one of their pet anti-Trump “former Trump officials.” This position typically mirrors their (and other media entities’) pretense at fairness like featuring an anti-Trump “conservative” or “Republican” that no actual conservative or Republican would recognize as such.

In a ridiculously self-serving and self-congratulatory post, Taylor claims he opted for anonymity to “force” President Trump to “answer [Taylor’s accusations] directly on their merits or not at all” (archive link).

Much has been made of the fact that these writings were published anonymously. The decision wasn’t easy, I wrestled with it, and I understand why some people consider it questionable to levy such serious charges against a sitting President under the cover of anonymity. But my reasoning was straightforward, and I stand by it.

Issuing my critiques without attribution forced the President to answer them directly on their merits or not at all, rather than creating distractions through petty insults and name-calling. I wanted the attention to be on the arguments themselves. At the time I asked, “What will he do when there is no person to attack, only an idea?” We got the answer. He became unhinged. And the ideas stood on their own two feet.

However, given his actual position at DHS, it seems clear that the real purpose of the NYTimes and Taylor opting to publish the piece anonymously was to give more weight to the narrative that there were anti-Trump ‘resisters’ not only throughout the Trump administration but even at its highest levels.

That narrative has been shattered.

I would add that the NYTimes credibility was shattered as well, but that ship sailed long ago.

The revelation of the identity of “Anonymous” calls into question whether the NYT had ample grounds to allow him to write without identifying him. I figured it had to be someone at cabinet level, at least.

Underscoring the NYTimes‘ dishonesty in running this op-ed anonymously while knowing the identity and low rank of the writer, White House press secretary Kayleigh McEnany stated the obvious: “It is appalling a low-ranking official would be granted anonymity and it is clear the New York Times is doing the bidding of Never-Trumpers and Democrats.”

White House press secretary Kayleigh McEnany issued a scathing rebuke of Miles Taylor, the former Department of Homeland Security (DHS) staffer who said on Wednesday that he authored the anonymous New York Times op-ed that revealed a member of the Trump administration criticizing the president’s character.

“This low-level, disgruntled former staffer is a liar and a coward who chose anonymity over action and leaking over leading,” McEnany said in a statement to reporters. “He was ineffective and incompetent during his time as DHS Chief of Staff.”

Taylor, who worked for DHS from 2017 to 2019, including as chief of staff to former Homeland Security Director Kirstjen Nielsen, announced Wednesday that he penned the op-ed, titled, “I am part of the resistance inside the Trump administration.” It was published under an anonymous byline in the newspaper in 2018.

. . . . McEnany also tore into The New York Times for running Taylor’s piece and painting him as a senior member of the Trump administration, dubbing the former chief of staff as a “low-ranking official.”

“It is appalling a low-ranking official would be granted anonymity and it is clear the New York Times is doing the bidding of Never-Trumpers and Democrats,” she said. “The American people elected President Trump to carry out his vision for the country, not an arrogant deep state operative trying to put their agenda ahead of the President’s America First policies.”

Instead of what he must have been hoping would be a ‘grand reveal’ with NeverTrumpers and the left rushing to welcome him with open arms, Taylor is facing backlash for his role in things he actually was doing.  And that was not #Resistance work, apparently.

This is the way Miles Taylor talked about family separation LAST WEEK ("It's horrible. But…") when news broke parents of 545 separated kids still cannot be located. He later deleted the tweet. pic.twitter.com/2QW0TpsNVv

Instead of Anonymous, should we call him Implicated? https://t.co/Wc6GnzWbxq

This Lincoln Project bro is having a day…. pic.twitter.com/YH8CaOPhkC

In addition to his stupid people tricks role as one of CNN’s resident anti-Trump ‘former Trump officials,’ Taylor has a cushy gig at Google.  Or he did have.  It looks like he may be on the cancellation list, though.

Google confirmed Taylor has worked for the company since September 2018, but has been on unpaid leave since August. Taylor took his leave this summer as he announced his support for Vice President Joe Biden’s presidential bid.

The tech giant’s hiring of Taylor immediately came under fire from some of the tech giant’s rank-and-file employees, angry at his involvement with President Donald Trump’s travel ban. As chief of staff to former DHS secretary Kirstjen Nielsen, Taylor publicly defended the policy that barred people from seven Muslim-majority countries from entering the US. Taylor was also involved with the Trump administration’s policy to separate families at the Mexican-American border.

‘Attention seeking bureaucrat’ #Anonymous is out and will soon be forgotten

I know, you are wondering who the heck is Miles Taylor? Even if he put his name on it most people would’ve had no idea who he was outside of Washington DC

who did u think it washttps://t.co/PH4RAXTjqL

President Trump is having a field day with this, as you can imagine. This video is priceless.

Trump, speaking at the Phoenix Goodyear Airport, calls "anonymous" (Miles Taylor) a "sleaze bag" and adds that he was worried it would turn out to be someone like Hope Hicks, Jared Kushner, Mike Lee, or Rand Paul.

"This guy, in my opinion, should be prosecuted," Trump adds. pic.twitter.com/Z9ROOy34pc

The only reason this guy is unmasking himself now is to try to distract from the Joe/Hunter Biden sleazefest.

notamemberofanyorganizedpolicital in reply to Recovering Lutheran. | October 28, 2020 at 7:59 pm

Maybe, but honestly, having read his self-outing post (linked above), I think he’s just a self-promoting loser hoping to rake in millions like other #NeverTrumpers have (i.e. The Lincoln logs). My guess is that he spent all the money he got for the fake news book and is looking for more.

I think he’s done, though. The left and right both reject him (for different reasons, of course), so what’s he going to do? His Google gig seems to be over (unpaid leave is the first sign, pushback from the Google snowflake crybullies is another). Even standardless CNN won’t want him now; his only value was as “Anonymous”; no one knew who he was (he’s not a “name”), so why did CNN hire him in the first place except they knew he’s ‘Anonymous’?

Never heard of him…

That’s probably what his family says about him, too.

NYT did the crime and now they must do the time.

Anyone know anything about the items in the following discussion?

Looks like the Democrats went all in on vote-by-mail. They received lots of ballots but apparently the return rate is not what they expected. now they have a real big problem. They scared their base that they will die from covid-19 if they vote in person. Trump did the opposite. He is urging everyone to either vote in person or take your mail-in ballot and turn it in in person. that’s brilliant because mail-in ballots tend to get rejected around 20%. Because of a lack of signatures postmarks or simply being filled out incorrectly. that doesn’t happen when you drop off an in-person ballot.

The moron Governor of Pennsylvania was on television earlier imploring and begging everyone to vote in person.
Excellent comment Baron. Thanks.

******No one is even mentioning the fact that the Democrats with help from the corrupt judiciary illegally removed the green party candidate from virtually all the swing state ballots, while leaving the libertarian candidate on. This is a 6 point swing for the DEMs otherwise they’d already be so far down they would have no chance.******

This is the hill this pathetic sleazebag will die on. Auburn will soon tire of him.

To bad about Auburn

“The New York Times laughably described him as a “senior administration official”
“Senior?”
I’d card this peachfuzz at a nightclub.

Looks like he’s no stranger to the Dupont Circle lifestyle, a courier of fortune and opportunity.

He’s more important than I thought. Experience made me consider that perhaps a janitor was Anon.

Too bad he could not learn to code.

I don’t get the particular claims in the endless drumbeat of OrangeManBadCharacter stories. (I haven’t read any of the books of that basis. There’s a level of coherence I need to anticipate before I’ll invest in reading a book.)

OrangManBad is a self-promoting showman? Yeah, and…

Former blatant womanizer, n I’ll even go would still be if he could get away with is. Yeah, and…

More than a little sketchy business dealing. Yeah, and he worked in real estate development then reality TV for cripes sake.

Blah, blah, blah. None of this requires a new book from an “insider.”

Meanwhile, in office, he’s … what? Done a bunch of executive orders that haven’t gotten flipped (mainly, as yet. And the one I recall that was judicially challenged, they re-wrote to address the issues, n the revision still stands.) Passed significant legislation, neither declared unconstitutional, nor rescinded (as yet.) BTW, none of his “signature” initiatives have been declared the lie of the year, as yet. Appointed scads of judges w/o scandal or prosecution, (as yet.)

Blah, blah, blah. None of this requires an insider tell-all to expose or object to.

Moved the embassy to Jerusalem, just to insist that they build it on property he already owned. Oh, wait, that didn’t happen.

Under anybody’s definition of normal circumstances any normal man would be uncomfortable being interviewed by a openly known homosexual like cooper. This kid seems enthralled. It raises questions.