“I think everyone, including myself, could be a little bit more looking at the policies of the President rather than their character.” 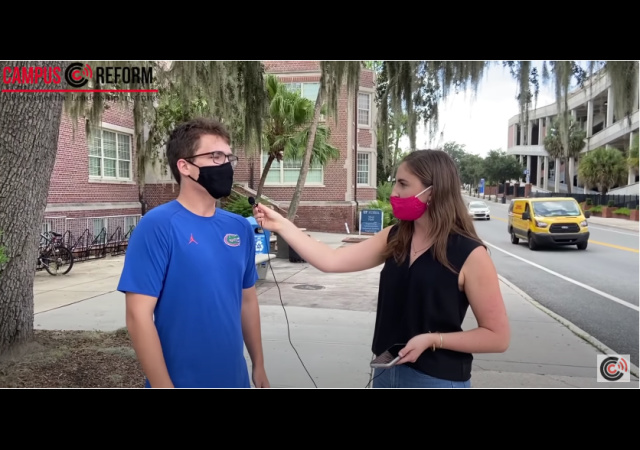 This is the perfect way to show that people only hate President Donald Trump because it’s him and not his agenda.

“The fight on terrorism has always been important, especially in America. So getting rid of stuff that can harm American lives is perfect,” one student said after hearing that “Biden” wanted to wipe out global terrorists.

Some of the students said that these ideas had an influence on whether or not they would vote for Biden in November.

“I mean, I still haven’t decided yet, but these things all sound great and they’re definitely making me lean more towards Biden,” one student said.
Campus Reform then mentioned that this was Trump’s agenda, not Biden’s.

“It surprised me a little bit because I don’t have the highest opinion of the president at the time, but I think that’s great,” one student said in response to learning that the Trump administration allocated more than $400 million to dismantle human trafficking networks.

“I think everyone, including myself, could be a little bit more looking at the policies of the President rather than their character” another student replied.

“In this time, not a lot of the good he does is heard. It does help knowing that he is doing these things,” one student said.

Proving that the ignorant are easily mislead.

“I think everyone, including myself, could be a little bit more looking at the policies of the President rather than their character”

Oh, FFS, this twit knows no more about PDJT’s character than about his admin’s policies. Such dimbulbs know only what somebody else spoon-feeds them. And that’s how we get widespread belief in global warming, the utter wonderfulness of communism, and pink elephants.

Maybe voting should include some qualifying questions. Like, say, if the voter can’t even find Washington on a map, his vote goes into the organic landfill.

I remain surprised that the country survived more than a decade or two, given the evident fact that universal suffrage is such an unworkable idea.

I know about spoon fed. Working as a sub teacher for 25 years has shown me that since the 21st century began, the kids are much more into wanting to be spoon fed answers. They don’t wanna have to think something through and God forbid taking the time to read a short one page essay on two sides of an issue & then decide where they stand. This isn’t all students but many more seem to be like this. The stronger the district’s discipline & if they follow their own handbook, the better the students think & challenge ideas. Otherwise, they just wanna to a shoe store sight & daydream or play racetrack games. It’s very sad.