Trump Announces 150 Million Rapid COVID-19 Tests to be Distributed to All U.S. States

Trump Announces 150 Million Rapid COVID-19 Tests to be Distributed to All U.S. States

Coronavirus Task Force’s Admiral Giroir demonstrates new rapid-tests for use at schools & churches, which may be a “game changer.” 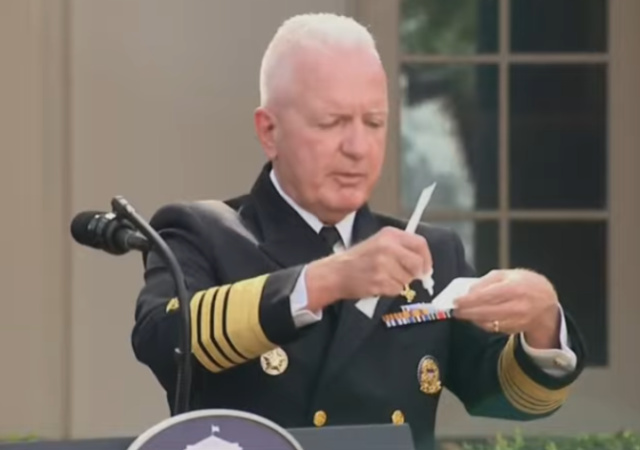 During a press conference on Monday, President Donald Trump announced his administration is sending 150 million rapid point-of-care tests to all 50 states for free..

The rapid tests, though intended for use by healthcare professionals, can be used at designated centers such as schools and churches, per Food and Drug Administration emergency authorization provisions. Coronavirus Task Force member and Assistant Secretary for Health Admiral Brett Giroir noted that the administration’s allocation of hundreds of millions of dollars for development and regulatory flexibility has led to an “inflection point” easy-to-use tests. This allows for wide distribution and assesses people infected with the coronavirus rapidly.

Giroir took a few moments to demonstrate the use of the Abbott BinaxNOW rapid tests.

So literally, it almost could not be easier. It starts with 6 drops of liquid onto this piece of paper. 1, 2, 3, 4, 5, 6. And then there’s a nasal swab, and again, this is– this is not the deep-brain biopsy that we talk about. This will generally done by a healthcare provider, but it can be done supervised.

It’s this easy– 1, 2, 3, 4, 5. 1, 2, 3, 4, 5. Into the test. Twist it three times. The adhesive is pulled off, and you wait 15 minutes. And that is the test. It really could not be easier then this. This is a very sophisticated little piece of cardboard with lots of antibodies and incredible technology into that.

The Trump administration plans to allow states to make their own determinations on how best to use the tests. The White House says 6.5 million tests will be sent to all 50 states this week, with another 10 million sent every week until the 150 million tests run out.

The Abbot BinaxNOW tests have the potential to be a game-changer, allowing for the swift identification of possibly infected people w before the go into high-occupancy situations that could lead to the “super spreading” of the virus.

The test provides results in 15 minutes, is priced at $5 and can be overseen by a wide range of people.

Despite being a quick solution, it is highly accurate, with 97.1% sensitivity and 98.5% specificity rates.

Because the Harris-Biden ticket is scaring Americans away from the emergency-authorized vaccines that are poised for approval shortly, these rapid, accurate, and inexpensive test kits may prove to be critical in ending the pandemic soon.

In other Coronavirus Task Force member news, during a contentious exchange with Kentucky’s Sen. Rand Paul at a Senate hearing last week, National Institute of Allergy and Infectious Diseases head Dr. Anthony Fauci distanced himself from his earlier support of an encouraging COVID-19 immunity theory.

At the hearing Wednesday, Fauci at one point got into an argument with Paul, who argued in part that New York City had developed a degree of herd immunity sufficient to prevent another explosion of COVID-19 cases there.

“There’s also the preexisting immunity of those who have cross-reactivity,” Paul countered, “which is about a third of the public in many estimates … which would actually get you to about two-thirds.”

“I’d like to talk to you about that also,” Fauci parried, “because there was a study that recently came out that preexisting immunity to coronaviruses that are common cold do not cross-react with the COVID-19.”

Fauci and Paul were referring to a burgeoning theory of widespread preexisting COVID-19 immunity. The theory holds that significant numbers of the population are more or less immune or largely resistant to SARS-Cov-2 due to the presence of certain “T cells,” a critical component of a body’s immune response.

In conclusion, I think I now know who my favorite Coronavirus Task Force member is:

NOW ON CAPITOL HILL:
Since the Fake News media and Democrats will continue to push Coronavirus panic and doom & gloom prior to the election, here is Admiral Giroir highlighting the the decreases in Covid-19 cases, hospitizations, ICU patients and deaths… please share pic.twitter.com/s3f62iQmIw

Butbutbut … The Sky Is Falling!

Somebody tell Dilbert creator Scott Adams. He’s been sniping at Trump for weeks over this test. This should make him happy.

But 150 million tests at $5 a pop is quite a lot of money that could have been used on infrastructure like a Big, Beautiful Wall.

It will also help our bonuses this year (I work for Abbott)!

Rather than saying the government is providing something for “free”, it would be more accurate to say “at taxpayer expense.”

Dang. Another win for Trump. And just before the debate tonight where Biden was going to make a big deal about Trump doing nothing on Covid.

Look for the haters to come out and bash this test now.

And what has Biden done for us during the pandemic?

Well, for starters the old dolt was part of the chorus singing the Dim standard “RAYCISS, RAYCISS, XENOPHOBIA” (Sung to the tune of Glory, Glory, Halleluiah) in January and February, when Trump restricted Travel from the country that was the source of the virus.

Something might have actually been done then to stem the flow of the disease into the US, had the government acted in coordinated fashion. But the Dims were too busy chasing their sham impeachment, which was designed to cover for the Biden family corruption in Ukraine.

Since then, Gropey, Sleepy, Dope-addled Joe has done nothing but mumble about actions he supposedly would have taken, all of which had ALREADY been taken by Trump by the time Gropey mumbled about them.

Hell- staying in the basement & off my TV as much as he has is a BIG plus in my book!

“…Abbot BinaxNOW tests have the potential to be a game-changer, allowing for the swift identification of possibly infected people /w/ before the(y) go into high-occupancy situations…”

Meh. This assumes goodwill and rational response from blue state politicos – two commodities history proved to be unicorns in those states during the dystopian hellscape of 2020.

1) – blue states will ignore this tool as an ‘anti-science’ trumpian distraction because Trump is Hitler!!

If these tests are as accurate as they claim, it might make reporting better but eliminating the high number of false positives we’re currently getting.

It still doesn’t address the biggest lie of all, that asymptomatic infections are bad. We should be celebrating all of these new “cases” since that is how herd immunity is achieved in the normal trajectory of virus outbreaks.

Keep in mind that “cases” is an inflated figure by definition. They do not tell us how many individuals are infect but how many tests produced positive results. Individuals typically take multiple tests, particularly if they report negative since the accuracy of these tests has proven to be unreliable. This particular test is even less reliable than the current swab tests.

Actually, it is the positive cases that produce the most retesting. Too many false positives.

That plus use of the drug combination of hydroxychloroquine (or quercetin), zinc, and Azithromycin, could stop the second year of the virus in its tracks (and maybe stop colds and the flu, too.)

How have supposed medical professionals like Fauci and others decided to completely ignore both herd immunity and T cell responses?

Antibody titer is only used as a measure of immunity because it is easy to measure. We have no biochemical method to measure T cell immunity from a blood test. T Cell immunity is consistently reported to be much longer lived and more robust than humoral (antibody) responses with various infections.

Not to minimize this in any sense. 150 million kits being sent to States with costs paid by Feds is a big deal. Feds and Trump get to highlight a specific action, states have a resource at no cost.

150 million is a big number. However, 150 million test kits designed for one time use on a population group that will need multiple, recurring tests is not going to be sufficient.

It is a good start. Rapid, deployable, simple, high confidence results. This blunts arguments about school reopening by placing an effective tool in the hands of the States to conduct testing.

Combined with the growing awareness that the Rona isn’t really a threat to those under 45 nor to those 45 and older without comorbid medical conditions this may force those fighting school reopening to reassess.

If you want to test absolutely everyone who’s working or going to school, and retest at least weekly, then no, it’s not even close. But then, there was never any chance of producing enough tests for that.

Exactly. I am thinking about the schools in certain blue States and Cities. Particularly the ones whose teacher unions are screeching about Rona.

Depends. Here in LA, our County Health Department Commander, “Not a doctor” Barbara Ferrer declared that she would not allow the schools to re-open until there are enough test kits to test every child every day. Insane.

She set that as the goalpost because it’s impossible.

So large gathering like say Trump rallies? Taking away another inane talking point from the left.

This is a bad idea. The only thing that will happen is a spike in testing creates a spike in cases. That will be used to justify extending lockdowns and mask mandates. Cases are meaningless, hospitalization and deaths are what matter. Those are declining and practically zero.