Audit ties UC Regent Richard Blum to advocating directly for admission of candidate who had 26% chance of admission after being wait-listed. 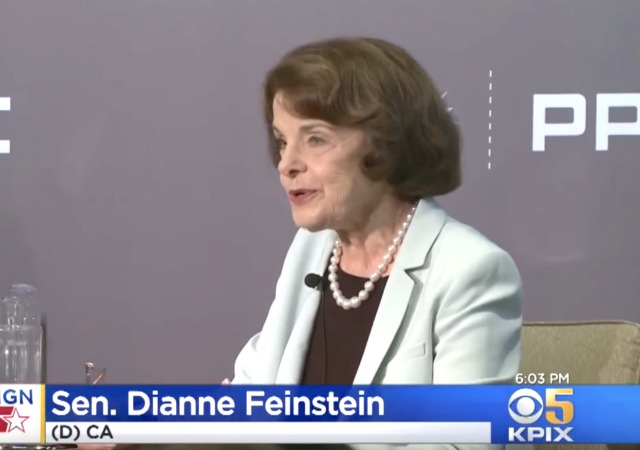 A few days ago, we noted a report that indicated Democrats familiar with the U.S. Senate’s Judiciary Committee are worried that California Sen. Dianne Feinstein can’t handle the Supreme Court battle that is looming in October.

News reports are now featuring a “scandal” associated with her husband, which may really be the Democrats’ way of persuading the senator to make a different choice regarding the SCOTUS nomination.

Reports indicate that Feinstein’s husband, University of California Regent Richard Blum, was named by the state auditor’s office as one of the regents involved in an admissions scandal wherein UC wrongly admitted dozens of students as favors to well-connected people.

Among those “inappropriately admitted” were a student whose family was friends with a member of the Board of Regents, the child of a major donor and an applicant who babysat for a colleague of a former admissions director, according to the report released Tuesday by the California State Auditor.

In one case, a regent unidentified in the audit sent an “inappropriate letter of support” directly to the UC Berkeley chancellor on behalf of a student with only a 26% chance of winning a spot off the wait list, despite the policy prohibiting efforts by regents to influence admissions decisions by going around the regular process. The applicant was admitted.

Auditor’s spokeswoman Margarita Fernandez confirmed to The Associated Press that Blum was the regent.

Potentially problematic for Feinstein, given the Democratic Party’s current priorities, is that the bulk of the students given preferential treatment were both wealthy and white.

The state audit found that UC Berkeley, UCLA, UC San Diego and UC Santa Barbara had admitted at least 64 applicants during the six-year time period in question because of connections to donors, campus staff or alumni. In most of the cases, the audit found, the admitted students had been rated not competitive for admission. The majority of them were white and at least half had annual family incomes of $150,000 or more.

UC Berkeley was the worst offender, the audit said, with 55 cases of inappropriate admissions. Among them, 14 cases involved students who were denied admission through the regular process and were offered a spot on the waitlist. Blum’s letter came in support of one of those waitlisted students, the audit said.

But that student, like the 13 others on the waitlist, had received “uncompetitive scores from readers that gave them poor chances of being admitted,” the audit said.

Now, if news reports start exploring Feinstein’s relationship with a Chinese spy in more detail soon, it will likely indicate that Democratic Party leaders truly want to remove her from her spot as the ranking member of the Judiciary Committee as soon as possible.

sounds like a dogma eat dogma problem in the Feinstein house

If this was only how deep Feinstein’s coruption goes.

She’s a ChiComm asset. Though what democrat or rino isn’t?

If the parents of students have to spend jail time, then the administration involved should get jail time no matter who they are married to.

It sounds like some deserving people are about to get justice.

Let’s hope. I’m on a higher ed blog, and the people working in that business are saying this is just silly and NOTHING AT ALL like Varsity Blues.

Actually of course it’s much worse.

With Bill Barr as AG? Surely you jest!

To UC Regent Blum and US Sen Diane Feinstein, a Couple of Corrupt Blowhards:

The dogmas (of treachery and shameless Janus-like duplicity) live loudly within you.

Leave in disgrace, the level of your joint being. Go “lead” others.

#HimToo #ThemToo and/or a severed ass’s head left in her bed. #HerToo

Nothing will come of this. She’s untouchable. So is her husband.

She won’t be prosecuted but the Dems are very concerned about her effectiveness as the senior ranking member of their Judiciary committee.

Blum has been a Regent since 2002, claiming to not know the rules of ethical behavior is an unacceptable excuse. He has a long history of being over involved.

from the mercury news
In a phone interview Thursday, Blum was unapologetic, saying he did not recall the specific incident mentioned in the audit but that he has written letters on behalf of students to chancellors at various UC campuses for years.

“It is therefore likely that the applicant whom the regent recommended would have been on a list that received priority admission from the waitlist,” the audit said. “Given the low likelihood of this applicant’s admission and the prominent and influential role that regents have within the university, we conclude that the decision to admit this applicant was likely influenced by the regent’s advocacy.”

what in her EON in office she like Obama didn’t have a hint fo scandal. sarc

So if you married into that crowd–family, friends, associates, not getting involved in corruption would be seen as letting down the team.

Installing unqualified/underqualified but connected applicants into the UC’s for $$$ is a very minor shenanigan compared to what these RICO specialists are involved in. I know the tendency is to think “Great, but nothing will come of it.” We knew these high speed train to nowhere grifters were selling snake oil for decades. And yes, no one did anything because they were all in on it. They protected each other while publicly vowing to put a stop to it. Then a miracle happened and PDJT was elected. Remember, much of the top “leadership” of the fbi has been fired, not just the serving at the pleasure of the President director. That’s very telling. The wall has been started, cutting into cartel business, which reduces/eliminates cartel kickbacks to the swamp. Anywhere there was crime, the swamp got their cut. Anywhere US taxpayer money went, the swamp wet their beaks. Being public servants made them wealthy. This is the spotlight on the cockroaches phase. The scale of corruption is so massive, a big, single reveal would have been too much for many. So we get a process. “What Storm, Mr. President?” “You’ll find out.”

If the Dems do remove Feinstein from the Judiciary Committee, they then face the almost certain disaster of Kamala Harris taking over the spot light. And it doesn’t get better as we look deeper into their backups…. Blumenthal, Whitehouse,…

Hopefully, they will take the lost cause of blocking Barret and expand it into a comprehensive rejection of the party at the polls in November. We really need to take over the House. If we lose the Senate (doubtful), then impeachment will be the only item on the agenda for the Dems. Not that controlling both houses of Congress will mean the GOP was against Trump is over.

Wow, this is common practice in the world of higher education and has been since the establishment of the first university. And, NOW it becomes some kind of problem?

Part of this is fallout from the previous college admissions “scandal”. That scandal was called forth, not because under-qualified applicants were gaining admission, but because the money to buy those admissions was not going to the schools involved. In the past, appeals for admissions were backed by money to the institution; either through direct endowments to the school, alumni donations or people of influence who controlled the funding for the institution. But, over time, the institutions priced themselves out of these sources of direct donations by getting greedy and setting to high a price to make an exception. Enter the independent entrepreneur. To stop the new practice and protect their traditional sources of income, universities got thee federal government to launch criminal investigations and send people to jail for not paying the university directly. So, what happens? So one points out that the schools themselves engage in the same activities, re: admissions, that people are going to jail for. An “investigation” is launched and, viola, “irregularities” are discovered. Then those involved in these irregularities are outed for political purposes. This is the college admission equivalent of the #MeToo movement. It is total BS.

Well most of the Varsity Blues parents paid big money for fake athletic endorsements, much of which went to the people in the athletic department. From there I don’t know if they applied the money to their athletic budgets or just put it in their pockets, but this isn’t really the parents’ fault at that point.

You might be right that this sort of political influence is common in college admissions. But it seems that at least some of these letters were written after the fact. If they had been written as rec. letters submitted at the normal time, sure those letters can be political. But even then, a regent is not allowed to write them in California.

I suspect that particular offense was a bit less common than what you say, and that most system overseers were following their explicit ethics requirements. It seems to me that Blum’s offense here is worse than what the well-off but fairly powerless VB parents did.

I never saw any problem with the admissions scandal. Pay off anybody you want. It’s a service for money. Tuition fees are mostly all bribes anyway.

The universities might have a civil lawsuit against an employee who’s pocketing the payment, is all.

This is more troubling to me than that was. Blum was, for free, using his influence and violating specific ethics rules for his position. No money went to the schools as a result of admitting those he promoted.

How To Protect Your Children From Indoctrination

This is the kind of thing that goes on at most institutions. Public Universities and public employers should be fragged for this blatant favouritism and misuse of taxpayer funds.

If the owner of a private company hires his idiot son in law for a no show no work job …it is his company and his money That ain’t the case for governmental employment.

The problem with this story is the lack of reporting. Here is a blatant example of the dreaded ‘PRIVILEGE’ being displayed. Privilege does exist but it doesn’t flow to the vast majority of people. It is limited to a small subset who are in a position to trade favors.

The issue for me is this is a perfect set of facts to do in-depth reporting on the subject of ‘PRIVILEGE’. Who is the recipient? Who are the providers? Who enabled it? How long has it gone on? How pervasive is it?

Unfortunately because the answers won’t show that average white people benefited it doesn’t support the narrative and won’t be examined and held out as a counter example.