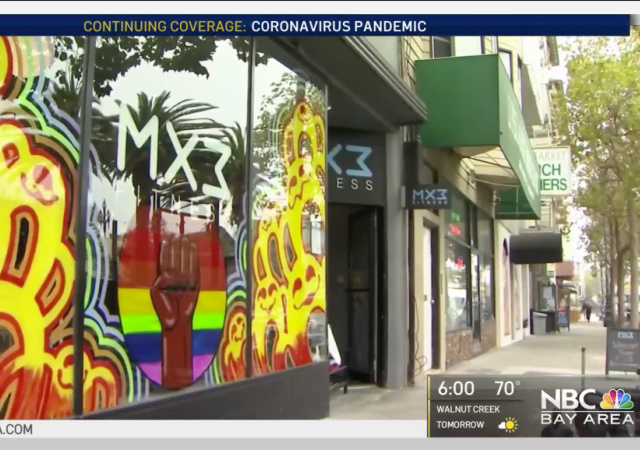 You can imagine how they felt when they found that a few city-owned gyms opened up a few months ago and allowed city employees to use the facilities.

One gym owner asked a few police officers if they wanted to use her gym to work out since she believed the city closed their station gym.

The officers told her that “they did have access to the SFPD Northern District Police Station on Fillmore Street — and police said Thursday that safety and cleaning protocols, as well as occupancy limits, have been established in department gyms.”

She said she has done everything she can to keep her gym on Sutter Street alive.

“Even though they’re getting exposed, there are no repercussions, no ramifications? It’s shocking,” she said.

Another gym owner pointed out the double standard, but noted “a silver lining” to the news:

“It just demonstrates that there seems to be some kind of a double standard between what city employees are allowed to do and what the residents of San Francisco are allowed to do,” said Dave Karraker, owner of MX3 Fitness in the Castro.

He said there is a slight silver lining to this discovery.

“What the city has unwillingly done is created this great case study that says that working out indoors is actually safe,” said Karraker. “So at this point, we’re just demanding that they allow us to have the same workout privileges for the citizens of San Francisco that the employees of San Francisco have.”

The police have access to their gym. The gym at the Hall of Justice opened up on July 1 for use by “judges, lawyers, bailiffs, and paralegals.”

San Francisco officials told NBC Bay Area “that the current health order does not allow indoor fitness gyms to operate.” The officials also stated that “privately owned gyms have to stay closed until at least the end of the month.”

I wonder if this will stand, though. Karraker pointed out this situation proved “that working out indoors is actually safe.”

Why can’t San Francisco citizens have the same benefits as the city officials? I’ve seen gyms in Oklahoma City only allowing a certain number of people in the gym at a time. People have to sign up for shower times. Gym owners spaced out the machines even more than usual.

It reminds me of Speaker of the House Nancy Pelosi’s trip to the salon. Also the Philadelphia mayor dining indoors on a trip to Maryland.

Instead of burning down commercial and residential buildings, we should be burning down government buildings. Things would start getting better fast.

Defund the gubmnt quadruplicate departments… sure.
Get rid of the (?) 1964 gubmnt unionizing… sure.
Make gubmnt a service again… sure.

Burn Bulidings…. say it aint so.

Apparently you didn’t get the memo. Destroying property is now protected under our 1st amendment rights to protest. We keep running afoul of the law because we only fight when the “peaceful rioters” try to burn down our businesses and neighborhoods. Let’s stay within the law and burn down the correct buildings.

There are going to be myriad retrospectives on the Dhimmi-crats’ indefensible, histrionic, callous and totalitarian response to the Chinese Wuhan virus. Rational Dhimmi-crats are beginning to question the alleged “logic” behind this insanity. It’s beginning to dawn on them that we’ve never in our history exhibited such irrational fear and such an overwrought response to the common flu, and, Wuhan virus is statistically only slightly more deadly than the common flu.

Take steps to protect statistically-vulnerable groups; sure, but, the rest of us have lives to live and income to earn.

notamemberofanyorganizedpolicital in reply to guyjones. | September 8, 2020 at 8:10 am

Remember it was Education that started the Shut Down knowing parents would have to stop working because of that in many cases.

Oh and Shut Down the Colluding Media.

Oh yes, and remind everyone that makes school and college administrators traitors guilty of treason. They have blood on their hands.

And, the way that the allegedly “science”-venerating Dhimmi-crats totally dismiss the importance of the population gaining “herd” immunity via infection, in favor of this ridiculous charade-theater of forcing everyone to go around wearing a stupid mask. I mean, do they expect this to be the norm in American life, in perpetuity? It’s insanity. We should be following Sweden’s lead in going about our business in a normal fashion.

Yes, I believe they do intend this to be perpetual. They demand vaccines, but when the covid-19 vaccine proves to be as unreliable as all the other coronavirus vaccines we will be told there is no choice but to continue mandating masks and business shutdowns.

Trump is in a no-win situation regarding vaccines: despite cheerleading for a vaccine the media is already discrediting his announcement of potential early vaccine availability, and will loudly denounce him if unknown risks that could have been discovered by an extended testing process become apparent.

notamemberofanyorganizedpolicital in reply to randian. | September 8, 2020 at 8:13 am

are going to End the MSM –

Yes, I believe they do intend this to be perpetual.

Get ready for more of the same as there are rumblings on the internet that another more infectious/deadly whatever virus has emerged in China that is likely to spread across the world just as the Wuhan virus spread. (But of course, China hasn’t confirmed the presence of this new virus like they did with Wuhan virus as it wouldn’t be in their best interests to do so.)

The bottom line is that from day one of the Wuhan virus spread, the Dhimmi-crats gleefully saw the virus as a weapon and a political gift, to use to attempt to destroy POTUS, and, predictably, their entire fear-mongering, totalitarian and callous response to the virus has been grounded upon politics, not science. That means that every policy proposal and fiat that the Dhimmi-crats proffer on this issue, is predicated on self-serving BS.

A “political gift” which they probably gave themselves. I highly doubt this virus happened spontaneously.

I believe the Chinese communists intentionally released Wuhan virus, knowing that it would severely damage POTUS’s election prospects. They are that vicious, calculating and devious.

This was the plan from the first with Red China. The CCP are what the commies really admire and want to follow.

LIberlaplaybook: the rules apply to thee but NEVER to me.

…and you’re a RACIST if you disagree.

You forgot misogynist as well. But we will get back to that soon enough.

Per my usual comment in situations like this, if the gym owners vote Democratic, they’ll get no sympathy from me

Why are the taxpayers compelled to pay for perks like gymnasia? Let them buy their gym memberships just like the peasantry.

How dare you peasants complain about your rulers??

There’s a consequence to decades of voting patterns. Who knew???

Don’t tell them About the Fed employees who got to sit on their butts at home two weeks out of every three and STILL got paid for all three!!!

San Fran you have a two tier system these days, those of the party friends and then the others.
Communism in a nut shell really.

The left always tries to pit groups of people against each other — but we don’t even have to try. We need to remind dems how terribly their awful boyfriend treats them, and to dump him/her for someone who will treat them a lot better.