Rutgers Prof: Trump and His Supporters Have a ‘Desire for Power at Expense of Everyone Who is Black and Brown’

Rutgers Prof: Trump and His Supporters Have a ‘Desire for Power at Expense of Everyone Who is Black and Brown’

“They support his vision of America. And that is rooted in racism.” 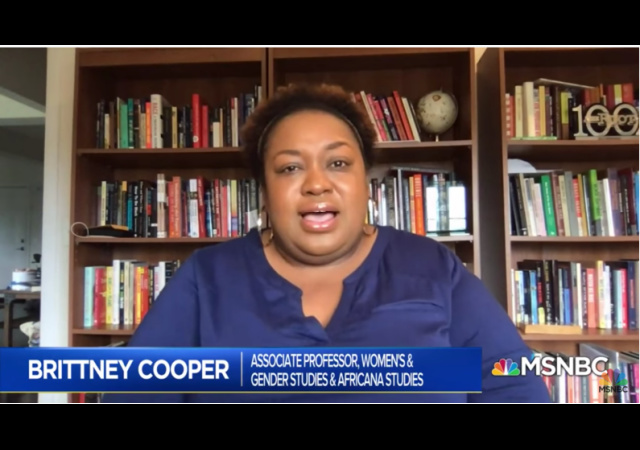 Cooper claimed Trump’s supporters’ vision for America “is rooted in a desire for power at the expense of everyone who is black and brown.”

Cooper also used the death of Chadwick Boseman to berate the supporters.
From The College Fix:

As reported by Newsbusters, guest host Zerlina Maxwell had on Cooper along with historian Jon Meacham to denounce President Trump for, as Maxwell put it, “violating the Hatch Act all over the place” and “encouraging brutal treatment of black people by police officers.”

Cooper, who in the midst of the COVID-19 lockdown this spring said efforts to reopen the country were a “gross necropolitical calculation” against black lives, didn’t need much prodding:

Look, President Trump is a lawless person. We knew he was lawless before he got into office. We had very good indicators that he had sexually assaulted women. So many people around him have been – taken hits and gone to jail because they committed crimes on his behalf. The President is a criminal. He has no respect for the rule of law. He understands this job as basically a money grab to support the Trump organization and his own individual pockets. And part of the challenge we have as a nation is that a significant swath of Americans still support Donald Trump. They support his vision of America. And that is rooted in racism. It is rooted in a desire for power at the expense of everyone who is black and brown. And so what we have in this problem is – is a – is a spiritual kind of tyranny of the worst impulses — you know Dr. Meacham said you know narcissism – you know sort of weaponizing narcissism. That’s a spiritual problem. It’s a – it’s a problem of our own kind of — sort of moral crumbling that’s happening in our faces.

“Professor Crunk” went on to use the recent death of actor Chadwick Boseman to assert the film Black Panther was a rebuttal to “a cultural project that denies the black humanity every step of the way, when black people are being shot down in the streets, when we’re being told that we are criminals and that our lives are unworthy of protection or care.”

And that is rooted in racism.

You know what else is rooted in racism?

notamemberofanyorganizedpolicital in reply to tom_swift. | September 1, 2020 at 10:00 am

And black Hillary donkey LICKERS too.

“ Women’s, Gender, and Africana Studies Professor” tells me all I need to know.

Frankly, that’s all you need in order to know that what she says will be absolute drivel.

She looks like Staey Abrams’s sister. Or, is that sistah? (Or, cyst-ah?)

Say no more. I think I already know how this is going to end.

Heh. I should have read the other comments before submitting my own. But it’s good to see I’m not the only one!

Why is it that it’s always an Associate profess with a Bull S. degree in “gender studies” will stand up and tell me that I am white privileged, racist, homophobic and want to keep others down. Madame, you are the perfect example of another race baiter living on the public teet…her name? Stacy Abrams

Because it’s literally all they talk about until they hand you a worthless degree and a huge tuition bill.

Wonder if the woman knows about anything other than Women’s, Gender, and Africana Studies?

They sure don’t make professors like they used to.

I remain convinced that were it not for EEOC and Title Whatever racial quotas, “studies” departments wouldn’t exist, and our universities would not be nearly as leftist as they are today.

Even if her allegations were true, what about it? Doesn’t she love “democracy” like a good progressive? Power at the expense of the minority is definitional to democracy, and I have little doubt that if she were in power she abuse whites the way she claims Trump wants to abuse blacks.