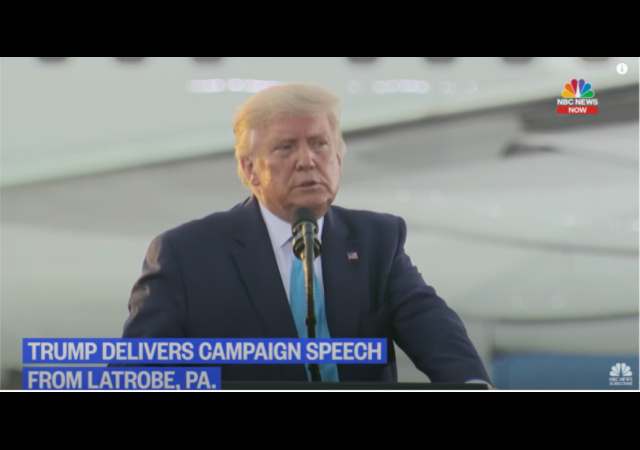 Will it be like 2016 all over again? Pennsylvania is a key state and it looks like the media’s constant bashing of President Donald Trump didn’t harm him in the state.

In fact, it seems Trump is more popular in Pennsylvania than in 2016 because the state has seen a lot of new Republican registered voters.

The polls in Pennsylvania showed a close race between Trump and failed Democratic presidential candidate Hillary Clinton in 2016.

The experts believed Hillary would win the state.

The media has been unkind to Trump, but has it done anything? I guess not because Politico reported that the number of registered Republican voters continues to grow in Pennsylvania:

The GOP has added almost 198,000 registered voters to the books compared to this time four years ago, whereas Democrats have gained an extra 29,000. Though Democrats still outnumber Republicans by about 750,000 voters in the state, the GOP has seized on their uptick in party members as a sign that Trump is on track to win this critical Rust Belt swing state a second time.

“It’s one of the reasons why I am very bullish on Donald Trump’s prospects in Pennsylvania. I think he will win again, and I think he will win by more votes than he did in 2016,” said Charlie Gerow, a Harrisburg-based Republican strategist who has worked on presidential campaigns in the state. “Trump is doing what Ronald Reagan did 40 years ago, which is moving a lot of traditional Democrats into the Republican column.”

The Democrats said they are not worried. A Democratic consultant brushed it off as mostly “‘Democrats’ who haven’t been voting for Democrats for a long time, choosing to re-register as Republican.”

Did the Democrats learn anything from 2016? I guess not, but this time, they have the pandemic as an excuse:

Republicans around the state said that they have benefited in recent months from the fact that the Trump campaign, which has sought to downplay the Covid-19 pandemic, has been knocking on doors and registering voters in person.

Joe Biden’s team has so far refrained from door-knocking in an effort to protect staffers and voters from the virus, though local Democratic groups in the state have held some socially-distanced in-person events to sign up voters.

Some Democrats said that has posed a challenge. The party has also spent significant resources on informing voters how to vote by mail that, in another year, could have been invested in other areas such as voter registration.

“Look, I’ll be real: The pandemic has kind of thrown a wrench into things,” said Jason Henry, executive director of Pennsylvania’s Democratic Party. “Our focus has truly been on educating voters on the new vote-by-mail laws.”

Voters in Erie, Luzerne, and Northampton counties helped Trump flip Pennsylvania. The Republican Party has seen a huge jump in voter registrations in those counties, which could be a sign that he will maintain them.

The Democrats in Pennsylvania are trying to make it seem like no big deal, but how much do you want to bet that they’re sweating? 2016 taught us that anything can happen. I still cannot believe Trump is president!

But Trump is doing what he did in 2016: hitting those key states. He gave a speech in Michigan on Thursday night. He spoke in Pennsylvania earlier this month.

Let’s hope this translates to vote. If registration was all that was needed the left would have won every election since 1968

notamemberofanyorganizedpolicital in reply to 2smartforlibs. | September 11, 2020 at 4:17 pm

Pennsylvania is a major beneficiary of the fracking industry. Without it, they would be like their neighbor New York which has banned fracking. Not a difficult choice.

Speaking of the importance of fracking in PA, someone needs to ask Trump about this:

It appears that the US central banks are still enforcing the Paris Climate Accord rules and favoring major energy investments into “renewables” over traditional petroleum energy. What gives? Are the banks also being run by Soros?

I live in Luzerne county … It’s going to Trump

It’s actually funny.
I have recently assisted quite a few senior citizens that wanted to register to vote. When I ask them about party affiliation they always say “Trump’s party.” Even if you explain to them that you can be independent and still vote for Trump they insist, “Trump’s party.”
Not Democrat, not Republican, they want to be in Trump’s party.

As much as I love the history of the Republican party, especially being founded as an Abolitionist party, it has been weak and mostly ineffectual for decades. Maybe it’s time we formed ‘The MAGA Party.’ The GOP needs to get it’s act together if it wants to survive, which is sad because it’s barely scraping by while the democrats are in full blown self destruct mode.

I am registered as independent myself.
I will be voting straight GOP because after all that has happened, it would be an insult to human decency to vote for a single Democrat, even for dog catcher.
That said, I can’t bring myself to calling myself, or regitering as a Republican.
I would probably join the MAGA party in a heartbeat, though.

notamemberofanyorganizedpolicital in reply to Exiliado. | September 11, 2020 at 12:51 pm

The GOPe is just another wing of the DNC.

There are still some states where you can’t vote in the primary unless you’re registered as a party member.

The GOP had a much better track record when this was true of more states than at present. They even almost became the majority party in California back in the ’90s, before the rules changed.

For many years I was an independent voter until a time when it became apparent that the elected in our local county and town governments were slowing becoming liberal in practice and policy. In order to run a strong slate to turn the tide, was directly the result of having turned the Republican Primaries into a major election. What happened 20 years ago with a registration drive to turn out more independents to register as Republicans to enable them to vote in the Primary and resulted by having strong support for a candidate who would represent the conservative government they wanted. I reside in a small NYS county which is in an 8 county 23rd Republican Congressional district. In our county, there has not been a democrat elected to office at the local level since the drive to move independents to register Republican.

Likewise the increased r voter registration, boat rallies, ect. Voters are excited to pull the lever for Trump. In contrast, who is fired up to vote FOR Biden?

IMO, there are several million additional voters who have not voted in a while or maybe never who have decided to vote FOR Trump.

I sure hope the Republicans have a very, very organized “machine” out there ensuring that voter registrations are “off the charts” in the other 49 states too. And that people are getting rides to the polls. And that massive numbers of people are getting help registering to vote by mail, and help ensuring those votes get collected and “harvested.”

Because you can bet your ass the Dims are doing all those things, and if the R’s aren’t, Trump is going to lose.

“‘Democrats’ who haven’t been voting for Democrats for a long time, choosing to re-register as Republican.”

Is it cynical of me to think that it actually is democrats registering as republicans, and they will then vote democrat so that the Dems can say that so many republicans voted against their party due to Trump?

To be properly Michiavellian requires both motivation and planning, and I doubt most voters—at least those who aren’t obsessed by politics—bother to do that much planning.

Getting around se Pa recently, not seeing much for Hiden Biden, some Trump, lots of signaling with the Hate Has no Home signs around Philadelphia

It’s not funny at all. It’s a sign of major undercurrents—tsunamis propelling, even overwhelming, the official parties. I don’t recall an exact parallel in American history.

We really have four major political forces in America—the socialists, the Democrats, the Republicans, and Donald Trump. The Democrats are pretending that they’re not socialists, and the Republicans are reluctantly coming around to the realization that they’d better become Trumpists or reserve a spot on that old rubbish heap of history, because without him they’re helpless in face of the socialist assault.

I won’t register as a Republican; it’d be a waste of perfectly good paperwork. But it’s no secret that I’m a long-time Trumpist. And I can’t be the only voter who thinks the same way.