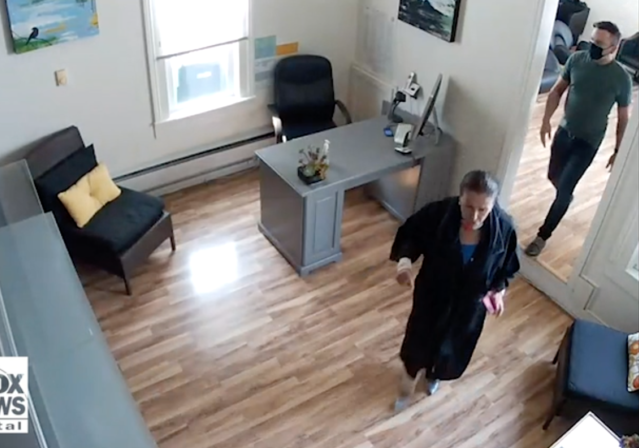 This seems like a perfect opportunity to have a discussion about “privilege.”

Video footage appears to show Speaker Nancy Pelosi at a shuttered San Francisco hair salon, despite local orders shuttering salons. You’ll also notice that while the stylist on camera is wearing a mask, Speaker Pelosi is not.

The salon owner called it a “slap in the face.”

In security footage obtained by Fox News, and timestamped Monday at 3:08 p.m. Pacific Time, the California powerhouse is seen walking through eSalon in San Francisco with wet hair, and without a mask over her mouth or nose.

The stylist doing her hair can be seen following her wearing a black face mask.

Salons in San Francisco had been closed since March and were only notified they could reopen on Sept. 1 for outdoor hairstyling services only.

Salon owner Erica Kious, in a phone interview with Fox News on Tuesday, shared details of Pelosi’s visit. Kious explained she has independent stylists working for her who rent chairs in her salon.

“One of the stylists who rents a chair from me contacted me Sunday night,” Kious said.

A screengrab of the text message she received from one of her stylists, and obtained by Fox News, said: “I’ll be there at 2:45 tomorrow. Pelosi assistant just messaged me to do her hair.”

“I was like, are you kidding me right now? Do I let this happen? What do I do?” Kious told Fox News, while noting that she “can’t control” what her stylists do if they rent chairs from her, as “they’re not paying” at this time.

“It was a slap in the face that she went in, you know, that she feels that she can just go and get her stuff done while no one else can go in, and I can’t work,” Kious told Fox News, adding that she “can’t believe” the speaker didn’t have a mask on. (From the footage, it appears Pelosi had some kind of covering around her neck.)

“We’re supposed to look up to this woman, right?” Kious said. “It is just disturbing.”

Asked for comment, Pelosi spokesman Drew Hammill maintained that the speaker was following the rules.

“The speaker always wears a mask and complies with local COVID requirements,” he said.

But the owner pushed back.

Kious said Pelosi received a wash and a blow-dry, but told Fox News that “you’re not supposed to blow dry hair” according to coronavirus safety precautions for hair salons.

“We have been shut down for so long, not just me, but most of the small businesses and I just can’t – it’s a feeling – a feeling of being deflated, helpless and honestly beaten down,” Kious said.

“I have been fighting for six months for a business that took me 12 years to build to reopen,” she explained. “I am a single mom, I have two small children, and I have no income.”

She added: “The fact that they did this, and she came in, it’s like a slap in the face.”

Kious told Fox News that she had expected to be able to reopen her salon in July, and prepared her space in accordance with local guidelines.

“There were rules and regulations to go by to safely reopen, which I did, but I was still not allowed to open my business,” she said, noting that she installed plexiglass partitions between sinks and seating areas, and ensured that all salon chairs were six feet apart, along with proper air circulation from open windows.

“They never let us open,” she said, while adding that she is unable to reopen outside because her salon specializes in hair color, and using chemicals outside is prohibited.

Pelosi is claiming she was mislead on the lockdown:

Afterwards she had ice cream.

Now who really wants to see Nancy in her natural state?

I don’t know whether to give a thumbs up for the snark, or a thumbs down for that really nauseating mental image…

Helen Thomas was not immediately available for comment. Justice Ginsburg declined comment as a matter of charity.

Google a picture of King Tutt, that’s pretty much what she’d look like without the makeup, hairdo, and extensive plastic surgery…

What is the over/under on the number of days until this shop gets Peaceful Protested(tm)?

more likely the state will pull her license and she’ll be shut down permanently.

She will get special attention from the inspectors. They can always find a violation and the fines are huge.

Why? The Dems will say the salon did nothing wrong — unless it was failing to bleach the security tape.

As for Nancy, well, it was just another of those “honest mistakes” the Dems are so famous for.

Read down to the update and see where at least some Dems are going to go with this.

Musta been on her other face that day.

That face IS a mask.

In Soviet Kaliforniya, you work for public officials!

I guess this event adds new meaning to the old saw, “Politics is the art of the possible”.

“There is one law for rich and poor alike, which prevents them equally from stealing bread and sleeping under bridges.”

We have a multi-tiered justice system: just ask Hillary Clinton or the rioters released to riot some more.

“One law” would be a great improvement.

The less laws you have, the less corruption and double standards there will be.

She probably flew all the way the San Francisco to have it done, there aren’t hair salons in DC?

Silly peasant, laws are for the proletariat, not the Politburo.

Comrade Commissar Pelosi could have the shop owner sent to the Gulug for leaking the tape. Clearly he is an agent of Trump and therefore of Russsia.

doesn’t she have SS protection? iirc speaker has full time protection. where is that person how much did the flights cost?
money wasting whore.

Not Secret Service. Members of Congress who have security details get them from the U.S. Capitol Police. And yes, because she is in the line of succession to the presidency her protection is 24/7, as is Sen. Chuck Grassley’s because he is President Pro Tempore of the Senate.

(One caveat: When Hillary was in the Senate, the USCP and the SS had to work out an agreement as to who was watching over her when, since she was entitled to 24/7 protection. Same thing happened with the Diplomatic Security Service and the SS when she was Secretary of State.)

“We’re supposed to look up to this woman, right?” -Erica Kious

That’s part of the problem right there. These government officials work FOR us, not the other way around. What the hell has nancy pelosi ever done for her constituents except get rich off them while lowering their quality of life.

Some silver linings in this “pandemic,” so many of us peons are getting a good look at these corrupt politicians.

Is it her stylist that lately has been drawing her eyebrows down to her jaw-line? They get any longer they’ll join beneath her nose.

She’s had so many face-lifts he’s styling her pubic hair at this point.

I’d like to give you a thumbs up on that Paul, but I’m kinda grossed out. 😮

So if the state of CA and the city of San Francisco are serious about the importance of folks wearing masks they will use this opportunity to issue maximum penalties to such a high profile violation as an object lesson.

IMO failure to do so will result in revealing that there are different rules for the ‘important ‘ people, which will fully disclose their hypocrisy. Expect widespread disobedience and civil suits from business owners who have been shut down if they make.this mistake.

Alternatively, if Pelosi ego could handle it, this is a.great opportunity politically. Pelosi, could simply be interviewed and say she was wrong, apologize, pay a small fine and the mask mandate could go on without a hitch. IMO, this ain’t gonna happen. In any case it must happen within a day or two otherwise her confession loses it’s credibility and impact.

I don’t think I have ever heard her apologize for anything, that would be breaking news

Medusa, getting her pet snakes groomed, isn’t that lovely?

Damn, I bet she stinks to high heaven. Did she have a eunuch with her? How about a lawn jockey?

Damn the day she was born.

That woman’s very existence offends me.

Her precious cuetsy wittle lisp and air-flirting some invisible suitor raises my blood pressure. She is a COW

To quote George Orwell: “ All animals are equal, some are more equal than others” .
Sounds like San Fran Nan, Chicago Groot, and Commissar de Blasio are living down to expectations.

Or a heat gun.

Thank god Pelosi isn’t resting on her laurels. Even though she has long been the worst person in the world, she continues to take her hypocrisy, greed and lack of integrity to new heights. Or do I mean depths? Nancy, Donald Trump is grateful for your efforts towards his re-election.

I was hoping she’d trip over that step down and do some major damage to herself.

Stylist Shoulda made a innocent mistake and scalped her right down the middle. Give her a reverse Mohawk and then say “oops” I made a mistake but don’t worry it will grow back.

She’s such a world class obnoxious asshole – aside from a corrupt POS that belongs in prison alongside her equally corrupt children dipping their nibs in the extortion of the Ukraine US foreign aid – along with Kerry and his family, to say nothing of biden.

May someone shove her and her facemasks and ice cream – and her entire refrigerator – and shove it up her ass.

nothing says white privilege more than making a shop space renter open up just because you can’t wash and dry your hair on your own It also required two people to be in the shop besides her.

Elitism on display for all to see.

No mention of the individual stylist who likely felt obligated to appease Pelosi. It’s a business very much tied to the good will and word of mouth of your customers.

“We’re supposed to look up to this woman, right?” Kious said.
So, you voted for her, then, right? So, you don’t listen well, do you?

The vile and totalitarian Dhimmi-crat apparatchiks’ imperial arrogance, their contempt for the peasants of the proletariat and their callous indifference to workers’/business owners’ plight, are exemplified by this incident.

Make a TV ad out of the footage and air it in every battleground state.

Nancy Pelosi NEVER accepts any blame. Besides, “rules are for the little people.”

And Pelosi just invoked a variation of the Marion Barry defemse: it was a setup.

Nope not going to buy that. Try again.

So the mask mandate seems to have lost its luster. Good luck in your future efforts to attempt to shame or judge or cajole the red of us Madam Speaker.

Ya’ll are a little behind on the times…. the stylist made a statement thru his attorney.. Looks like the salon owner has been breaking the law since April. Read the full article.

Just had my hair done. Only one client allowed at a time. Only myself and hair stylist. Had to wear mask at all times. Including when my hair was being washed.