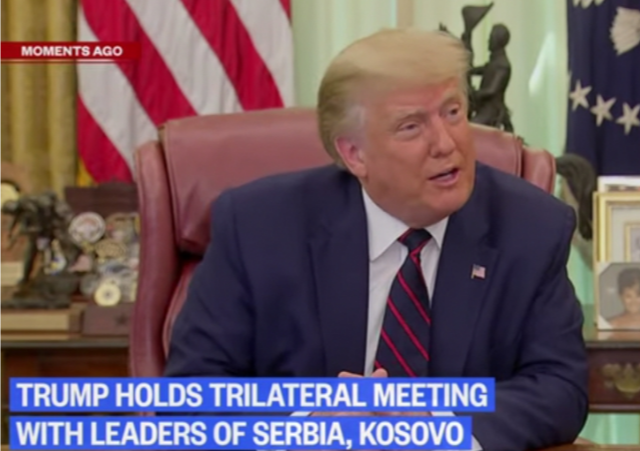 The news of Serbia and Muslim-majority Kosovo opening their embassies in Jerusalem has triggered a new wave of anger within the Palestinian leadership. The Balkan nations moving diplomatic missions to the Holy City is an act of “unjust aggression against the Palestinian people,” the Palestinian Authority said in an official statement.

The Palestinian rage this time was focused on U.S. President Donald Trump who brokered the landmark agreement that ended the rivalry between the two Balkan countries, and paved the way for them to establish full diplomatic ties with the state of Israel. Following the White House agreement on Friday the two countries will become the first European states to open embassies in Jerusalem. Kosovo will be the first Muslim-majority country to do so, Israeli Prime Minister Benjamin Netanyahu announced.

Another great day for peace with Middle East – Muslim-majority Kosovo and Israel have agreed to normalize ties and establish diplomatic relations. Well-done! More Islamic and Arab nations will follow soon!

The Times of Israel reported the angry Palestinian response:

The Palestinian Authority on Friday slammed US President Donald Trump, accusing him of orchestrating the decision by Serbia and Kosovo to establish embassies in Jerusalem to satisfy his “electoral ambitions.” (…)

“The Trump Administration once again shows their full commitment with the violation of international law, UN resolutions and denial of Palestinian rights by encouraging nations to illegally recognize annexed Jerusalem as Israel’s capital,” Erakat tweeted.

“Palestine has become a victim of the electoral ambitions of President Trump, whose team would take any action, no matter how destructive for peace and a rules-based world order, to achieve his re-election,” Erakat charged.

Erakat appeared to call on the Arab League and Organisation of Islamic Cooperation to sanction Kosovo and Serbia, calling for “concrete measures against those who encourage crimes and violations against the land and people of Palestine.”

“What else will Trump procure for Israel before November?” said senior Palestinian official Hanan Ashrawi.

The latest wave of Palestinian rage began in January 2020 when President Trump unveiled his Israeli-Arab peace plan. Angered over the U.S. peace initiative which offered a $50 billion development plan among other incentives, Palestinian rioters took to the street burning American flags.

The historic peace agreement between Israel and the United Arab Emirates announced by President Trump on August 13 ignited fresh Palestinian protests, with rioters rampaging on the Temple mount, the holiest site for all Abrahamic religions. “Palestinian worshipers tore up, trampled and set fire to images of Sheikh Mohammad bin Zayed, the crown prince of Abu Dhabi, as they protested in the compound of the al-Aqsa Mosque [the Temple Mount] in Jerusalem against the peace agreement,” the left-wing Israeli newspaper Haaretz reported. Elsewhere, Palestinians burned posters of President  Trump, and Prime Minister Netanyahu to express their anger over the U.S.-backed push for peace between Israel and its Arab neighbors.

Thank you Mr. Netanyahu! My government is dedicated to open the embassy in Jerusalem, establish diplomatic relations and deepen bilateral relations.???? https://t.co/wU5YOP6gcm

Recent successes by the Trump administration in normalizing diplomatic ties between Israel and Arab countries have also alarmed Iran-funded Palestinian terrorist groups. The top leaders of Lebanese Hezbollah and Gaza-based Hamas terrorist groups met in Beirut and gave a call for the formation of an “axis of resistance” against the Jewish state, Israeli TV channel i24News reported on Sunday.

I bet the “Servians” are annoyed as well. 🙂

Based on who is upset about this, I am for it.

“What else will Trump procure for Israel before November?” said senior Palestinian official Hanan Ashrawi.”

More than he can possibly imagine 🙂

If Slick Willy still had a grasp on reality he’d be smoking.

We are learning that securing peace in the ME wasn’t that complicated. Just tell the neocons and their Chinese partners to leave the room and everyone is eager to settle. Just isn’t as profitable as perpetual war… in the near term.

Palestinian rage: who gives a sh*t?

“The [former, old-thinking] Arabs [had, and for now, the present-minded Palestinians, so-far stuck in an existential space-time warp,] have never missed an opportunity to miss an opportunity,” he chimed pithily in the old, worn-out, seemingly indefinite Israeli-Arab contest for “the land lost between the river and the sea”.

Let the perpetually wrong-choosing Palestinians stew in the self-pitying arrogance and irrational dead end of their own making. Let them self-destruct, if that’s their only wish. Or join with Hamas in their relentless, futile attempt to make war on Israel, and thereby commit “national” suicide — to the extent they are even a nation at all. They’re obviously and completely nuts — and wrongheaded, and misguided.

Or blinded by their need, in the words of Golda Meir, on endless war, “to hate the Jews more than they care to love their own sons”.

Hmm. How exactly will Joe Biden take credit for this one?

Looks like the entire world is tired of the PLO and their constant claims of victim-hood.

The key here is that the Kosovars are getting something useful in exchange for putting an embassy in Jerusalem. To wit, they get

The Kosovars have to be saying to themselves, “and in return all we have to do is dump the Palestinians and put an embassy in Jerusalem? Where do we sign?”

By the end of Trump’s second term, the western European countries maybe the only ones left with embassies in Tel-Aviv.

If the Israelis let them keep them.

What I don’t understand is why Israel ever allowed foreign embassies to be located in Tel Aviv. Does the USA allow embassies in Baltimore?!

That’s one more in the inventory of foreign policy progress. Someone explain to me again how commander no govt experience will have to be such a disaster?

Here’s the thing. Domestic policy. Foreign policy. Economic policy. Navigating both the coupe by innuendo, and weaponization of any prosecuter’s office you can name. Getting stuff done with, and around a dynfunctional congress.

How can a short-fingered vulgarian reality TV celeb with orange hair pull all that off? Some feral smarts and merely putting “America first” is enough to run circles around those other clowns. It’s almost like they were never that smart. Or interested in what’s good for the US. Or both.

They know that public opinion is shifting. Palestine and their tantrums have basically no support outside the rabid left, which is no longer meaningfully in control.

Israel isn’t going to give them anything else, they can’t apply pressure because public opinion has shifted against them, and they know Palestine will never, EVER be able to beat them militarily without huge support from multiple countries and they would take heavy losses if they could even win.

They’re done propping them up.

When is there ever a positive story involving the Palestinian narrative?

I wonder how much the gradual erosion of the EU has had to do with these foreign policy shifts. In any case, the clear imprimatur and leadership of the Trump administration doesn’t appear to be lacking.

The Palestinians are finally showing that all they have to bring to the table is outrage, condemnation, and an empty threat of retaliation. Nothing constructive. They’re like the small town that first fought against the railroads until they were bypassed, and then took a stand against the interstate, just for a capper.

Such a brilliant insight — fifty years of Middle East Peace experts and negotiators were talking to the wrong people.

Imagine what the Middle East will look like after four more years of Art of the Deal Diplomacy.

I can’t tell one flavor of moslem from another. But if they’re fighting each other over not fighting Israel, I guess this is a positive.

“The historic peace agreement between Israel and the United Arab Emirates announced by President Trump on August 13 ignited fresh Palestinian protests, with rioters rampaging on the Temple mount, the holiest site for all Abrahamic religions.”

Huh?!?!?!? First, “Abrahamic religions” do not include Islam. Second, the TM is the holiest site for ONE religion, Judaism. Because, well, the Temple. Certainly Mecca and Medina mosques and that meteorite are vastly more important in Islam.