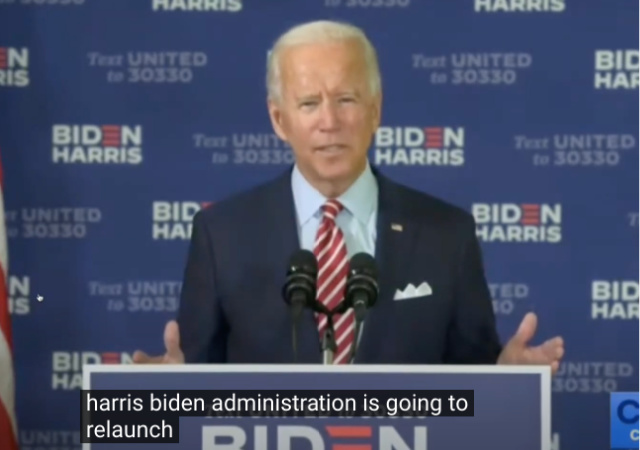 I don’t believe in coincidences. Fuzzy wrote about Kamala Harris saying, “A Harris administration together with Joe Biden” on Monday.

Then Biden said a “Harris-Biden administration” on Tuesday.

Fuzzy noted in her post that Biden doesn’t know what he’s running for, his running mate, the year, and that he has to use a teleprompter.

Now Biden implied that Harris is on top of the ticket. Two days in a row both of them do this.

“It makes it so much harder for military spouses to find good jobs and build their careers. That has to change,” Biden said. “A Harris-Biden administration is going to relaunch that effort and keep pushing further to make it easier for military spouses and veterans to find meaningful careers to ensure teachers know how to support military children in their classrooms and to improve support for caregivers and survivors so much more than we do now.”

It didn’t stop there. He mixed up Iran and Iraq: “U.S. troops died in Iran and Afghanistan.”

They would lose their minds, too, if Trump mixed up Iran and Iraq.

Why don’t they just call it a Chinese Communist Party Administration?

How much of this is an attempt to have Kamala vetted as little as possible?

With everyone in the campaign constantly saying the quiet part out loud, I’m not sure it’s Kamala being spared the vetting.

Remember how in 2008 the media shaped the presidential race as being between Obama and Palin, because McCain was old and if you voted for him for president you were essentially voting for her for president? Oh, and she was so unqualified!

Now we truly have a situation in which the VP candidate is in reality the presidential candidate. Both Harris and Biden aren’t keeping it a state secret, and the media is perfectly OK with it.

Yeah many of us have realized this for a while now, Biden if elected will be president in name only. He won’t really be the one calling the shots, at least on important issues, that will all be handled by Harris and the various administrative heads. And when it comes to the administrators: yeah! Expect the regulatory agencies to reassert themselves massively under a Harris-Biden presidency!

And whoever is the chief of staff.

In a Harris administration, it’d be more like a chief of staph.

The scam is now so bold, so brazen, that I can’t imagine how a self respecting person can even think about voting for them.
They are making a mockery of our entire belief system.

Party loyalty and Orange Man Bad explain a lot of it.

notamemberofanyorganizedpolicital in reply to The Friendly Grizzly. | September 16, 2020 at 1:54 pm

Plus they are CORRUPT.

Had to comment on this. This is no slip up. This is a coordinated effort to begin getting their base ready for the bait and switch that is about to happen.

What it means for us is Joe’s condition has accelerated to the point that they no longer feel they can wait till after the election.

This is all just rope-a-dope by Biden to make Trump overconfident. In the debates, Biden’s logic will be sharper than a kunai and his words will sound like diamonds bouncing on a titanium tabletop.

Remember, you read it here first.

The Biden-Harris ticket is being “REIMAGINED.” Biden is quickly becoming a fatal liability.

I believe that they’re starting to (subliminally?) prep the public for Biden’s departure from the ticket.

I wouldn’t be surprised if Biden dies of Covid (Arkanicide style). This would get him off the ticket with plausible deniability (of DNC machinations being behind it). And would set the stage for, e.g, “a historic” ticket of “two women of color.”

The other one being someone more popular with the voting group slipping through the Democrats’ grasp: Michelle Obama, or even Oprah Winfrey.

Neither need have any intention of serving long — they would just be there for the election / inauguration, and then resign.

Biden will never become President even if he is elected.

notamemberofanyorganizedpolicital in reply to Grrr8 American. | September 16, 2020 at 1:58 pm

The DEMS can stick in any black woman and it will not help them now.

DEMS are in their final Death Spiral,
and they know it.

Another thought: I wonder if they’re also intentionally doing this in an attempt to appeal to women. As in, vote Democrat and the VP won’t just be doing the ceremonial stuff. She’s going to have a strong say in how things are run.

Let’s be fair here. Biden was reading from his notes. They were probably written by Ben Rhodes.

Maybe Biden does not really have dementia. Maybe, the people in charge of his Teleprompter just have an ongoing prank to see what is stupidest thing they can get him to say.

“Quick, Bob. Throw another grasshopper on him!”

Yeah… I’m pretty sure aliens lock their doors when they go cruising by planet Earth!

wasn’t there a teleprompter in use here? thought had seen mention there was.
if so the error is much worse.
what if he read of the prompter correctly? that would mean all the staff is complicit with the fraud.
if no prompter in use then disregard.

Somebody back the truck up and shut this clown car, trojan horse sh*t-show down.

That was no slip. that was code to the knuckle draggers worried about senile Joe.

Meanwhile Dr. Jill is reading up on Edith Wilson…

Biden can easily last the two years required to give Harris 12 years of being President, so long as they can prevent a Congressional vote to remove Biden.