Do you want the police or not? Make up your minds. 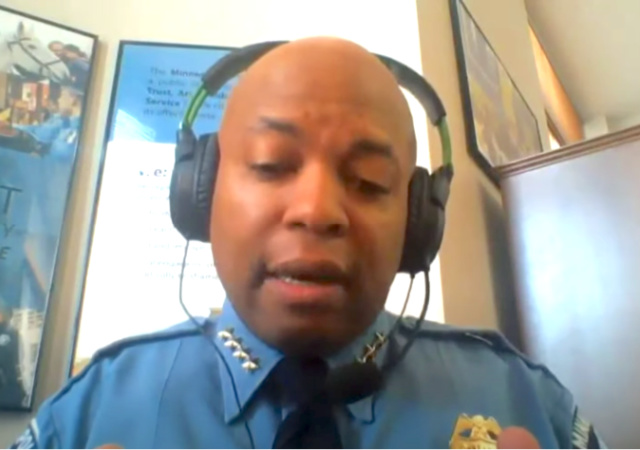 Who saw this coming?

The Minneapolis City Council voted to dismantle the police department after the death of George Floyd. Now the city is seeing an uptick in crime and shootings. 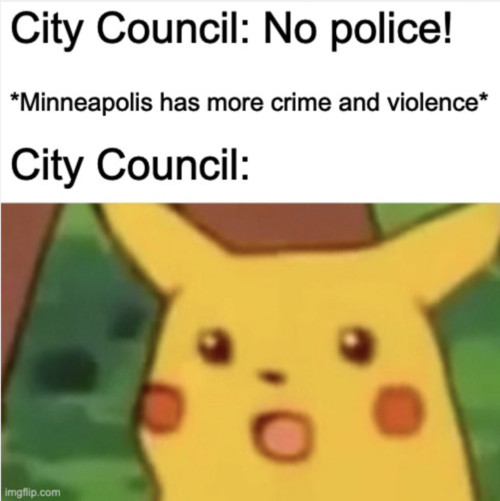 The city council began to dismantle the department in July. They voted to remove $1 million from the police department and transfer “it toward the health department to hire ‘violence interrupters’ who are intended to defuse potentially violent situations.”

So do you want the police or no, bro?

The city council aired frustrations at the latest meeting:

But for much of the two-hour meeting, council members told police Chief Medaria Arradondo that their constituents are seeing and hearing street racing which sometimes results in crashes, brazen daylight carjackings, robberies, assaults and shootings. And they asked Arradondo what the department is doing about it.

“Residents are asking, ‘Where are the police’?” said Jamal Osman, newly elected council member of Ward 6. He said he’s already been inundated with complaints from residents that calls for police aren’t being answered.

“That is the only public safety option they have at the moment. MPD. They rely on MPD. And they are saying they are nowhere to be seen,” Osman said.

Riots and violence erupted after Floyd’s death. The city council and other politicians added fuel to the fire by targeting police, which no doubt caused more distrust.

Arradondo pointed that out to the council:

Noting that some residents feel apprehensive about calling police and that others have said they felt they were being held hostage by the current environment, Arradondo said, many people will need to make compromises while they work to reimagine public safety. That could, he said, include council members.

“That may mean you making commitments that might be uncomfortable for some of those constituents that you represent, but if your ultimate goal is to have true community safety, I will tell you right now, we have to work together in that effort,” he said.

As the discussion about crime continued, Council Member Phillipe Cunningham pointed out that some of his colleagues appeared to be contradicting earlier statements in favor of ending the department.

“What I am sort of flabbergasted by is … colleagues who a very short time ago who were calling for abolition, who are now suggesting that we should be putting more funding and resources into MPD,” said Cunningham, whose ward includes North Side neighborhoods that have been among the hardest hit by the recent violence. “We know that this is not producing different outcomes.”

Minneapolis has 55 homicides so far this year. It only had 48 all of 2019. Arradondo said there have been 400 shooting victims.

Arradondo also informed the council that 100 cops have left the job, which is “more than double the 40-45 normal separations in a given year.” No doubt Minneapolis will see more cops leave.

You could get the sense that Arradondo wanted to tell the city council that their actions the last few months led to the increase in violence.

Lacy Johnson, the Republican trying to unseat Rep. Ilhan Omar (D), did not hold back:

“The hypocrisy and failure that we’re seeing from this City Council is astounding and deeply troubling,” Lacy Johnson told “Fox & Friends.”

Johnson, who is bidding to unseat Rep. Ilhan Omar, D-Minn., said the council was calling for the” dismantling or demilitarizing or the disarming of police” all summer.

“Now they’re turning around and blaming these brave officers for a situation that they have created,” Johnson said, citing the rise in home invasions, robberies, murders and carjacking.

“All of those things have gone up and it is something that should have been expected, but it just shows you how out of touch our City Council is and our liberal government leadership here in Minnesota is,” Johnson said.

Yes, they really are this stupid.

Picture a city such as Baltimore without police, who’s going to suffer the most? You got it the inner city residents. Do White Antifa members really care about Black lives? Clearly they don’t.

Antifa and BLM have never cared about the lives of black Americans or the quality of their lives – Black Americans are just a handy shield to hide behind while they follow their true goal – destroying the Republic.

Yes, they really “think their constituents” are this stupid.

Yes, they are really stupid, arrogant, entitlement minded, and most are criminals to varying degree.

This is much like the education system aka “indoctrination” centers were no one has to demonstrate any skills or knowledge of anything and without any can’t get a job, then scream “racism”.

Who are you, who are so wise in the ways of science?

We should leave hot stoves around for these people.

The full quote, for those that haven’t read Heinlein,
“Throughout history, poverty is the normal condition of man. Advances which permit this norm to be exceeded — here and there, now and then — are the work of an extremely small minority, frequently despised, often condemned, and almost always opposed by all right-thinking people. Whenever this tiny minority is kept from creating, or (as sometimes happens) is driven out of a society, the people then slip back into abject poverty.

This is known as “bad luck.”

Think about if you were a street cop in Minneapolis. The mayor and city council hate you and call you racist, and you may not have a job for long because they want to defund the department.

So, in between looking for other departments who might take you as a lateral transfer, what do you do while you’re on duty?

Do you bust your ass going out and being proactive and getting gang-bangers off the streets and taking away their guns? If one of them assaults you or attacks you with a weapon, you aren’t allowed to defend yourself, because if you do, you’ll be fired and called a racist and probably hit with criminal charges and a show trial.

Or, do you go to the local donut shop and have a donut and coffee, and only respond to radio calls that are directed specifically at you?

I suspect that the donut shops in Minneapolis are now doing a lot more business with the local police force than they were before the riots.

The flip side is also likely true – the criminal element in the city was given a green light by city officials to go wild. If you’re a petty criminal you’ve been incentivized to do more muggings, more breaking and entering, etc. And if you’re a drug dealer, why not bump off the competition and expand your empire – who’s going to stop you?

I would hope that someone would sue these idiots over the murder of their loved one being a result of their lunacy.

I hope they get big bucks.

And what do we do about the voters who gave them the keys to the city?

The Marxists have been working on the public education system at least since the early 1960s. They have been patient while the good people have been working and assuming all people loved freedom. LBJ saw a way to re-enslave the Blacks. The Marxist’s saw a way to exploit the Democrats philosophy of control and corruption. It is a marriage made in Hell. Democrat voters are the most clueless of people even when they pay for the harm caused by their own votes.

Democrats are in mortal fear that the voters might actually think. Is that fear justified? Perhaps we need Soviet style “elections” so the fear can dissipate say they. Elections without any controls over the legitimacy of the ballots will work.

If only it were that simple. Some of the stupidest damn people I ever met had genius IQs. You’d need to specify that only the middle 96% could be eligible.

If only we could figure out a CSQ, Common Sense Quotient. It seems to be totally independent of IQ.

Think of the human brain like a network of mostly dedicated computers serving different purposes, many of which have been cludged over time to new purposes.

A system like that is bound to be flaky.

I have know a number of geniuses who lacked crucial traits needed to be successful.

Fitting that a municipality represented by a racist Somali maniac is morphing into Somalia. Ilhan Abdullahi Omar may yet get her dream job of being a genocidal warlord.

It is amazing that in so many big cities that the best qualified person for chief of police turns out to be black or a black female.

And that those same cities then turn around and complain about how racist and sexist their police departments are.

If I were Arradondo, I would already have feelers out to other departments. Minneapolis is one of the worst possible places to be the police chief (along with Seattle, Portland, etc.). I suspect that there are many cities that would like to hire an experienced Black police chief.

Same with the states attorneys. Here in Chicago the poorly run justice system is killing people. Just had a 5 time convicted felon on electronic monitoring murder 2 and wound 2 of his fellow partiers. It sickening citizens-mostly black-are paying the price for the virtue signaling of our politicians.

The lesbian before him was on vacation when the Somali cop assassinated Justine Damond and was sacrificed. There had been other problems with encampments blocking streets near the North Minneapolis precinct after Jamar Clark was killed. He was the one who beat on a woman, then tried to interfere with the paramedics treating her, who called the cops. When he tried to take the cops gun the other cop shot him. So it was time for a black police chief. I’m not up on Woke bingo so don’t know who’s next.

Soon, on late night TV, the ambulance chaser commercial for legal action due to shaking your head, knowingly because of clearly predictable results.

You know the saying, stupid is as stupid does…

They were dumbfounded too!

Imagine being so intellectually cloistered as to be this dumb?

Don’t you hate it when those sims don’t do what you wanted?

Too bad these clowns are playing with real people; consequences are real.