“And I suspect the president was being told as well that this virus wasn’t spreading in the United States.” 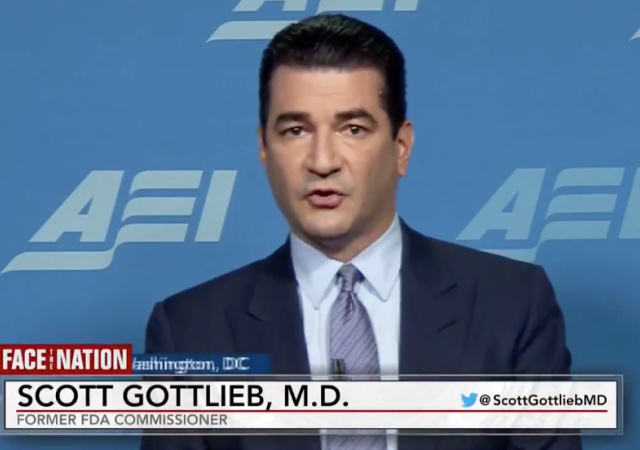 Margaret Brennan asked Gottlieb if “the failing here was one of public messaging or was it operational” when it came to messaging on the outbreak since February.

Well, look, the public messaging wasn’t clear and consistent in the outset and could have been better at all levels of government. I think if you look back in February, and I think when history looks back, the biggest failing over that month was that we were- we were situationally blind. We had no idea where this virus was and wasn’t spreading. And so when it came time to have to shut down cities, rather than focus on the cities that were truly epidemic, like New York City, we went for a simultaneous shutdown order across the whole country when that was unnecessary now, in retrospect, because there were a lot of cities where the virus wasn’t spreading at that time and we could have focused on mitigation. But we had no diagnostic test in the field to screen people. And what CDC officials were relying on and telling the coronavirus task force was that there was no spread of coronavirus in the United States in February, they were telling them that because they were looking at what we call the influenza-like illness surveillance network, basically a surveillance network of who’s presenting to hospitals with flu-like symptoms. And they said that they’re seeing no spike in people presenting with respiratory symptoms, therefore, coronavirus must not be spreading. And they were adamant about that. I was talking to White House officials over this time period. They were adamant about that. And I suspect the president was being told as well that this virus wasn’t spreading in the United States. And that may have impacted what he did and didn’t say and his willingness to, you know, as he said, talk it down a little bit because he was of the perception that this was not spreading here in the United States. That really was the tragic mistake, not just that we didn’t have the information, but we were so confident in drawing conclusions off of what proved to be faulty information and incomplete information.

Look, I think in this respect, the White House leadership was failed by health officials. We did not have a diagnostic in the field, so we couldn’t screen for it. We should have. We should have started working on that in January. And we over-relied on a surveillance system that was built for flu and not for coronavirus without recognizing that it wasn’t going to be as sensitive at detecting coronavirus spread as it was for flu because the two viruses spread very differently. Those were two critical failings. Now, you could say, well, the president put those people in place, he’s responsible. You know, you can make second-order arguments around that. But I think ultimately the White House did not have the information they need to make decisions. The key function of agencies and the government is to provide policymakers with accurate, actionable information. The White House didn’t have it. And I had a lot of conversations with the White House over this time period because I was concerned it was spreading here, and I was pushing them on that. And they were- they were telling me over and over that they were hearing from top officials from the agencies that they were pretty confident that it wasn’t spreading here. I think when history looks back, that’s going to be a key moment. That’s what was going on over February.

MORE: The former @US_FDA commissioner on critical failings of #COVID19 response:
➡️”We over-relied on a surveillance system that was built for flu”
➡️”The key function of agencies and the government is to provide policymakers with accurate information. @WhiteHouse didn’t have it” pic.twitter.com/Pt6MjmyNQC

At this point, my default view is that this entire thing is nonsense.

What should we have done, if we knew then what we know now?

We should have isolated the elderly and people with significant Pre-existing conditions. And, the rest of the country should have just lived their lives. When we reached herd immunity, the seniors could have been unlocked.

Perhaps it should have been obvious then what we know now. I remember one of the very first publicized hot spots was some nursing home in the State of Washington … and telling my wife at the time that if is is active in a place like that they have to be really vulnerable and it has to be all over the place.

In other words, we should have done exactly what Sweden did.

We need a top-to-bottom reorganization of the CDC and FDA. Both agencies have been utterly derelict in their duties.

Nonsense. In January, Trump was busy restricting travel to China while the Democrats diddled around with fake impeachment.

In January the Wuhan virus was already here and spreading. The point of the ban on foreigners coming here directly from China was to attempt to stop it getting here; we now know it was already here, but at the time nobody knew, and Trump was being told it wasn’t.

Whatever. So tired of hearing former Deep Staters whine and complain about Orange Man Bad.

Me too. These career teat-sucking bureaucrats are supposedly the “BEST MEN” whose entire purpose is to make the government ready to handle these situations. And yet they continually screw up, and then cry when a POTUS finally starts to call them out on their ineptitude.

What are you talking about? He’s not complaining at all; he’s explaining how the mistake was not Trump’s.

Kudos to this honest physician and former beaurocrat for speaking out. (He served as FDA Commissioner until April 2019.)
Remember, also, this is the same FDA that restricted the use of hydroxychloroquine – in the face of scientific data from doctors in this country and around the world.
The anti-Trump Deep State remains alive and well in DC.

In short, nobody knew anything when this started, and far too many people were willing to fill in the details with their own fantasies. (This includes Very Intelligent People Who Have Particular Pre-Conceived Notions That Make Them Sound Crazy)

-At the beginning, China said this was strictly an animal-to-person disease. That was either a misconception or a lie, depending on your viewpoint.
-Then it was assumed to be another type of flu much like every year. Wow, that was wrong.
-Then they thought it could be tracked by hospital admissions. By the time hospital admissions ramped up to detectable levels, it was too late to contain.
-They also thought the majority of the cases would be from 1-60 year old people. Turns out 95% of the fatalities are in people older than 60, and the younger ones are mostly asymptomatic. Whoops.
-A world-wide quarantine was pushed for, but for healthy people, not for sick people. Stellar-level screw up there.
And the biggie:
-Donald Trump was listening to the medical professionals and making as informed decisions as possible at the time while trying to keep the people calm, which was promptly used by his political enemies as ways to attack him regardless of the body count from their actions. Yes, Cuomo, Pelosi, Schumer, et al…

Considering how many Dems have ties to CCP assets the timing of their sham-peachmemt & it’s overwhelming consumption of Congressional resources is becoming increasingly convenient (suspicious??) as more detail such as this emerges…

Exactly. AND, this has proven that EVERY Flu number ever released by the CDC was just a wild guess. They pretended like they new things that they never really did.

“The nine most terrifying words in the English language are: I’m from the Government, and I’m here to help.”

normally swampers usually protect each other

“We should have isolated the elderly and people with significant Pre-existing conditions. And, the rest of the country should have just lived their lives. When we reached herd immunity, the seniors could have been unlocked.”

Speaking as an 86-year-old, I strongly object to this suggestion. AIUI most COVID deaths were among nursing home residents. Those of us who are well enough to live alone are much less likely to get sick. Cutting us off from normal social contacts is very stressful.

As far as herd immunity is concerned, I live in a county with 90,000 residents. There have been four COVID deaths. At that rate it would take many years to reach herd immunity.

You have it reversed. A low death count indicates herd immunity in action. There are few deaths because nobody is spreading it, and it isn’t spreading because most of the population is immune.

Who does this clown blame for the 50k deaths from a predictable virus that happens every year?

The deep state doesn’t want herd immunity. They locked everybody up in their houses, not to stop the spread, but to slow herd immunity. That bought them more time to create a vaccine. The whole thing was about extorting billions upon billions of dollars from the American taxpayers so they could turn around and sell us a vaccine. And if they could destroy Trump’s economy and in-turn blame Trump during election year, well then it’s a two-fer.

Evidence for your position is the lack of interest or outright opposition to cheap therapeutics like hydroxychloroquine, steroids and ivermectin, versus expensive new therapeutic, remdesivir.

President Trump should fire the current head of the CDC (and everyone up to two levels below him) and hire Dr. Gottlieb! The lack of a test in January, when researchers in Seattle and elsewhere had developed their own, is complete incompetence on the part of the CDC.