Gov. Tom Wolf already plans to appeal and take it “as far as necessary.” 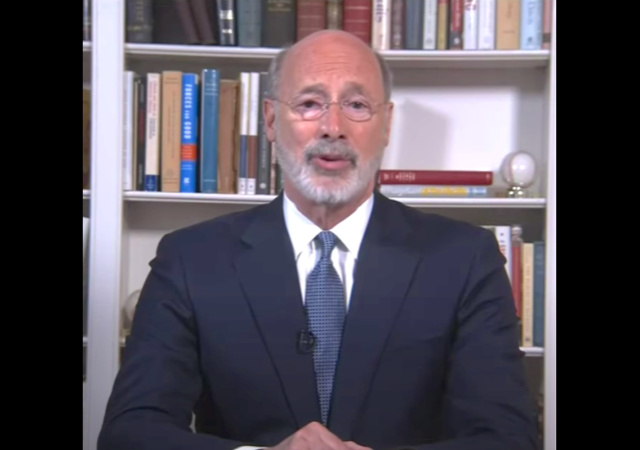 Four western counties in Pennsylvania filed the lawsuit “during the ‘red phase’ of the governor’s reopening plan when many businesses were closed.”

The plaintiffs argued “that numeric limitations on the size of gatherings violates the First Amendment.”

They also said that “closing ‘non-life-sustaining’ businesses and requiring Pennsylvanians to stay-at-home violated both the Due Process and Equal Protection Clauses of the Fourteenth Amendment.”

The state believed the best way to stop the spread was to shut down businesses. The Court pointed out that closing non-life-sustaining businesses “did not rationally relate” to the state’s purpose:

Closing R.W. McDonald & Sons did not keep at home a consumer looking to buy a chair or lamp, it just sent him to Walmart. Refusing to allow the Salon Plaintiffs to sell shampoo or hairbrushes did not eliminate the demand for these products, it just sent them to Walgreens or Target. In fact, while attempting to limit interactions, the arbitrary method of distinction used by Defendants almost universally favored businesses which offered more, rather than fewer products. As such, the largest retailers remained open to attract large crowds, while smaller specialty retailers-like some of the Business Plaintiffs here-were required to close.

The Court also took issue with the way numbers of people were allowed to gather:

The imposition of a cap on the number of people that may gather for a political, social, cultural, educational and other expressive gatherings, while permitting a larger number for commercial gatherings limited only by a percentage of the occupancy capacity of the facility is not narrowly tailored and does not pass the constitutional muster. Moreover, it creates a topsy-turvy world where Plaintiffs are more restricted in areas traditionally protected by the First Amendment than in areas which usually receive far less, if any, protection.”

Stickman reminded Wolf that “the solution to a national crisis can never be permitted to supersede the commitment to individual liberty that stands as the foundation of the American experiment.”

Nichole Missino, owner of Giovanni’s Barber Shop, said the decision brought “tears to” her eyes. She defied Wolf’s orders in May and reopened because of the lack of income.

“It was awful, we were closed for 10 weeks, my barbers were starving,” Missino told CBS Philly.

Attorney Thomas W. King III, who represented the plaintiffs, described the decision as a “complete and total victory.” From TribLive:

In testimony for the case, King said, there was no medical evidence presented relative to the spread of covid-19, and Levine did not testify and instead sent a representative to do so.

King said he posed the question — once the stay-at-home order was lifted in early June — what establishments in Allegheny County were responsible for the increased spread of the virus, and no one could answer.

Wolf’s office released this statement right after the ruling:

“The administration is disappointed with the result and will seek a stay of the decision and file an appeal. The actions taken by the administration were mirrored by governors across the country and saved, and continue to save lives in the absence of federal action. This decision is especially worrying as Pennsylvania and the rest of the country are likely to face a challenging time with the possible resurgence of COVID-19 and the flu in the fall and winter. Today’s court ruling is limited to the business closure order and the stay at home orders issued in March and were later suspended, as well as the indoor and outdoor gathering limitations. This ruling does not impact any of the other mitigation orders currently in place including, but not limited to the targeted mitigation orders announced in July, mandatory telework, mandatory mask order, worker safety order, and the building safety order.”

Wolf made it known on Tuesday that he will appeal. From Philly Inquirer:

Gov. Tom Wolf said Tuesday he will appeal a federal judge’s ruling that key components of his coronavirus mitigation strategy are unconstitutional.

“I’m going to take that appeal as far as necessary,” Wolf said, “…to make sure Pennsylvanians stay safe.”

They wear masks, social distance, and understand the severe actions needed in March to flatten the curve, he said. President Trump and the Republicans in Harrisburg, Wolf said, need to “stop playing politics with this disease.”

”I’m going to contain the virus and I think that’s the only way we can protect the lives of Pennsylvanians and keep our economy going,” Wolf said. “We’re not going to do either one if we just sit back and let this thing roll over us.”

Wolf already plans to ‘forum-shop until he finds a sympathetic judge to rule in his favor’ appeal.

He can’t forum shop. It has to go to the Circuit Court of Appeals where the state is located. The 3 judge Circuit panel is usually randomly assigned.

Otherwise known as ask Mom if Dad says no.

What does your first line mean? I’m serious. Thank you.

Take it to the SCOTUS unconstitutional means the same there as in your low life state of mind.

So, where do the people of Pennsylvania go to get the last six months of their lives back? (Or nine months by the time the appeals finish.)

I suppose rational people (i.e., conservatives) should be unsurprised that a Dhimmi-crat apparatchik wants to contest, via litigation, the allegedly quaint notion that there are constraints on, and, limits to, his political power.

“Curses! Those Framers again and their wily ways”

Let us [=lefties] face reality. The framers (of the Constitution) have simply been too shrewd for us. They have outwitted us. They designed separate institutions that cannot be unified by mechanical linkages frail bridges(or) tinkering. If we are to turn the founders upside down we must directly confront the Constitutional structure they erected.

Leftists always fight hard when it comes to any form of reigning in their power grab. How dare anyone question their right to take whatever powers they want?
Whitmer, Cuomo, Wolf, they are nearly interchangeable in their dictating ways. Just don’t try anything to reduce their power grabs.

I just heard on KABC radio’s John Phillips Show that major corporations are lawyering up fast to sue the CDC and Governors over these shutdowns. Since the government can’t make up its minds who exactly is in charge and what the rules are, no one can plan their lives or businesses. I can’t wait.

notamemberofanyorganizedpolicital in reply to Pasadena Phil. | September 15, 2020 at 9:13 pm

Methinks they’ll only have success if they sue the cities and states.

Good President Trump left the decisions up to them – as it should be.

Pasadena Phil in reply to notamemberofanyorganizedpolicital. | September 16, 2020 at 7:09 am

Looks like Disney is one of the prime movers on this. Epcot and Disney World in FL have been open for quite a while without an outbreak yet Disneyland in CA remains closed (except for the NBA’s “bubble”).

There is cooperating with the government when they keep moving the goalposts and refuse to provide any real guidance on how they make their decisions. Just try to figure out Warden Newsom’s logic vs “Not-a-doctor” Barbara Ferrer’s. It’s just power-crazy people talking down to us idiots.

It has become obvious to anyone with a brain that we are dealing with anti-capitalist commies who are relishing their new power and refuse to give it up.

We are now heading into the regular flu season so the opportunity window to re-open the economy is closing fast. So the corporations (who are actually listening to the REAL doctors and scientists) have had enough.

Correction: “There is NO cooperating with the government…”

What a scammer. Every democrat has their nib in the public ink.

I’m surprised to not be seeing news of lawsuits nationwide.
They have exceeded their authority
Any word on Ginsburg? (insert picture of strutting vulture with tex “Asking for a friend”) 🙂

Heard I think was one of the lawyers on the case on Philadelphia talk radio Dom Giordano’s show and this writeup does very well explaining the case.

Hasn’t the Supreme Court already ruled in favor of the state governments on their prohibitions? Google Governor Sisolak (NV) and the Calvary Chapel Dayton Valley Church. Somehow, the Governor was upheld.

Sorry, I won’t read the Philly Inquirer link. That rag is done.

When a governor turns the state into an effective dictatorship and drives people out of business and abrogates all rights we have as free humans … there should be more than a slap on his wrist and a lifting of his insane, un-American, un-Constitutional dictats. He should be held criminally liable for such egregious violations of the citizenry over such a long period of time. He has to be held responsible for the serious crimes he has been committing over the past 6 months – crimes that anyone with even half a brain knew he was doing.

I am happy that this judge is FINALLY setting the record a little straight (though this case – because of the insane nature of WOlf’s illegal actions and the dire consequences of them – should have been expedited and heard immediately when it was filed, not months down the road) but i am very disappointed that he has not been honest about Wolf’s motivations. The judge has assumed good faith on Wolf’s part but it was clear from the very beginning that Wolf (and the rest of the dem scum governors) took these actions in bad faith and never let data inform them of anything. In fact, the more data that came in saying that the Wuhan virus was much less deadly than they had initially assumed, the tighter the dictatorial restrictions got.

Even after they suspended all restrictions so that insurrectionists could go out in the streets and loot and burn and try to destroy this very society, they still clamped down even further with the BS restrictions on law-abiding citizens right after. There was never even an iota of good faith on Wolf’s part, which is a good deal of why he needs to be held criminally liable for his un-Constitutional actions (which are unprecedented in American history – that’s how un-Constitutional they are).

I will not be satisfied until Wolf (and that ugly tranny guy) are thrown in jail for trying to turn Pennsylvania into third-world dictatorship and treating free citizens and their private property as government subjects and property.

And all this happened right after that same party had just tried to use the federal government to carry out a coup (and failed, miserably). It’s just unbelievable … unbelievable that not a single person has gone to jail for even 20 minutes over these greatest crimes that have ever been committed in America.

At last a federal judge with the guts to uphold the Constitution against a Democrat power grabber.

Scratch a Democrat and find a dictator wannabe underneath – every time. Examples: Cuomo, DeBlasio, Murphy, Whitmer, Newsom, Wolf, and on and on.