Despite Opposition at UN, U.S. to “Snapback” Sanctions on Iran

Despite Opposition at UN, U.S. to “Snapback” Sanctions on Iran

The ‘snapback’ to restore all sanctions on Tehran lifted under the Obama-Kerry nuclear deal. 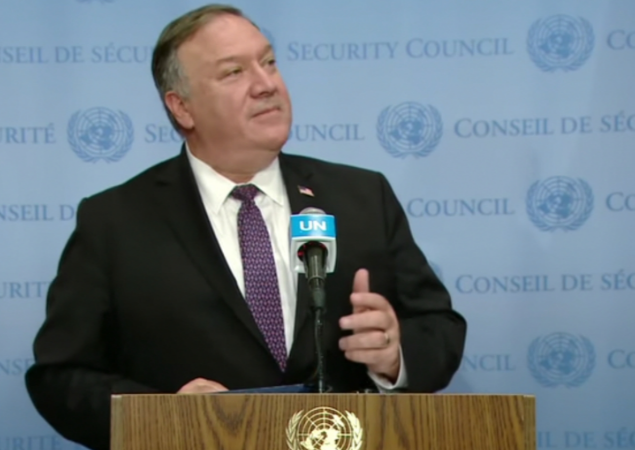 Despite opposition from China, Russia, and the European members of the United Nations Security Council, the United States is set to trigger snapback sanctions on Iran. All U.N. sanctions on the regime will begin September 20, U.S. special envoy for Iran, Elliott Abrams, confirmed Wednesday.

The “snapback” will restore all sanctions on Tehran lifted under the Obama-Kerry nuclear deal. The move is expected to discourage China and Russia from selling arms to the regime and European countries from investing in its oil and gas sectors.

President Donald Trump initiated the snapback process last month after the UN Security Council voted down a U.S. resolution calling for the extension of an international arms embargo on the regime before it expires in mid-October.

“Today I am directing Secretary of State Mike Pompeo to notify the U.N. Security Council that the United States intends to restore virtually all the previously suspended United Nations sanctions on Iran,” President Trump said on August 19. “It’s a snapback.”

China and Russia have long been lobbying the UN Security Council to shield Tehran from these sanctions. The United Kingdom, France, and Germany, the European signatories to the 2015 Iran deal, have come out against the proposed U.S. measure.

“UK, France and Germany agree to reject US demand for Iran snapback sanctions,” the UK newspaper Guardian reported referring to the decision reached last week at the ‘E3’ ministerial summit in Kent, England between the foreign ministers of these three European powers.

The Associated Press, on Thursday, reported the impending U.S. move:

In defiance of overwhelming opposition, the United States is preparing to declare that all international sanctions against Iran have been restored. Few countries believe the move is legal, and such action could provoke a credibility crisis at the United Nations. (….) Trump administration will announce on Saturday that U.N. sanctions on Iran eased under the 2015 nuclear deal are back in force. But the other members of the U.N. Security Council, including U.S. allies, disagree and have vowed to ignore the step. That sets the stage for ugly confrontations as the world body prepares to celebrate its 75th anniversary at a coronavirus-restricted General Assembly session next week.

“These will be valid U.N. Security Council (actions) and the United States will do what it always does, it will do its share as part of its responsibilities to enable peace,” Secretary of State Mike Pompeo said on Wednesday. “We’ll do all the things we need to do to ensure that those sanctions are enforced.”

Pompeo traveled to the United Nations on Aug. 20 to formally notify the Security Council that the U.S. was triggering snapback because Iran is not complying with the nuclear deal. He dismissed suggestions that the administration was engaged in anything legally questionable or even controversial.

He said the snapback mechanism was the “one thing that the previous administration got right” in the nuclear deal that Trump has denounced as the worst deal ever negotiated. The agreement was a signature foreign policy achievement of President Barack Obama and gave Iran billions of dollars in sanctions relief in exchange for curbs on it nuclear program. (…) U.S. special envoy for Iran, Elliott Abrams, told reporters Wednesday that all U.N. sanctions would “snap back” at 8 p.m. EDT on Saturday.

”We expect all U.N. member states to implement their member state responsibilities and respect their obligations to uphold these sanctions,” Abrams told reporters.

The measure taken by the Trump administration is also aimed at China and Russia, who plan to sell vast quantities of arms to Iran once the UN embargo expires. Earlier this week, Secretary of State Mike Pompeo declared that the U.S. would prevent the Iranian regime from buying “Chinese tanks and Russian air defence systems.”

“The Trump administration vowed on Wednesday to impose the ‘full force’ of U.S. sanctions on any international arms manufacturers who deal with Iran once Washington sees a United Nations arms embargo on Tehran as reimposed,” the news agency Reuters reported Thursday.

The sanctions aim to stop Iran’s Islamic Revolutionary Guard Corps (IRGC), the regime’s military wing, and a U.S.-designated terrorist outfit, from getting its hands on the latest weapons systems. The Iranian regime and the IRGC supply and fund terrorist groups across the Middle East, including Hamas and Hezbollah.

The snapback mechanism was brought into play by the Obama administration while concluding the 2015 Iran nuclear deal.

“If Iran violates the agreement over the next decade, all of the sanctions can snap back into place,” President Obama assured the world at that time.

The Iranian regime has since embarked on an ambitious nuclear-capable missiles program and has denied multiple requests by the UN inspectors to access its nuclear sites.

““The Trump administration vowed on Wednesday to impose the ‘full force’ of U.S. sanctions on any international arms manufacturers who deal with Iran…”

The money line. Behind all wars, there is that irresistible incentive to get fantastically rich selling arms to all sides.

“… such action could provoke a credibility crisis at the United Nations.”

Not to mention the first part of that line:

“Few countries believe the move is legal,”
Legal schmegal, what “international law” will we have broken in applying our own sanctions on Iran? Much less who will try to enforce any sanction against us?

Um, they’re not our own sanctions. They’re the Security Council’s sanctions. The snapback clause says that any JCPOA participant state, at any time, can submit an official complaint to the secretary general alleging that Iran is not keeping the deal, and 30 days later all UN sanctions automatically snap back into place, unless in the meantime the Security Council passes a new resolution to keep them lifted. And of course the USA can veto such a resolution.

This is the one good thing 0bama did in this whole mess. And as I explained in this forum at the time, on Jan-20-2017 the incoming president would be able to invoke this clause, and on Feb-19 the sanctions would be back, and there would be nothing anyone else could do about it. And while Russia and China would just ignore it, the EU’s own courts would make it comply.

Unfortunately those who say this is illegal are probably right, because the clause specifies that a “JCPOA participant state” can invoke it, and the USA is no longer a participant state. Trump officially withdrew from JCPOA, which was the right thing to do, but by doing so he forfeited his right to invoke this clause. The better thing to do would have been to stay in and invoke it right away.

I understand your reservations about the efficacy of the US withdrawal, but you’re position is based on the false premise that the JCPOA is anything but a political commitment, that it was instead formalized and legally binding, and that Iran actually signed it. As far as I can tell, the latter construction isn’t true.

No, my position is not based on that premise. This has nothing to do with JCPOA. It’s about Security Council Resolution 2231, which is what lifted the UN sanctions on Iran. That is binding international law, and it contains the snapback clause, giving any state that participates in JCPOA the right to invoke it. So the only relevance of JCPOA is that to invoke it the USA would have to be a participant.

Between this and the peace deals if Trump gets four more years the Middle East will likely be in a lot better shape than it has been in decades.

Once more, Europe is never a friend. They cause world wars.

I go cross-eyed whenever our clever European friends do intl relations. It’s like Jr High lunch with side deals, “understandings”, and endless permutations of who’s chuffed at whom, over what.

Whatever the mechanics of whatever anybody thought, it works out however the Heathers decide at the moment. See, for example Brexit. How dare they negotiate like they have the right to leave, just because the charter says they can.

So, sanctions are supposed to depend on Iran’s behavior, n “snap back” on violation. They wanna play legalism n standing games that’s fine. What agenda might that demonstrate? What was their agenda in the first place? Are the Iranian Overlords pulling this crap or no? If the Accords of Obscure Name mean what they say, or as advertised, it shouldn’t matter who brings it up … or was the whole arrangement pretend-conditional (suckers?)

Kinda like keeping G B in the E U. The Euroweenies sure didn’t want Albion in their club for its own benefit (in its terms), rather as a resource pool to direct at corralling vassels into line. (For Jolly Old read “USA” in the current scam.)

Myself, I prefer my imperialists a bit more up front about it, but that’s just me.