Trying to negate questions about Joe Biden’s stamina, health, and preparedness to lead the country 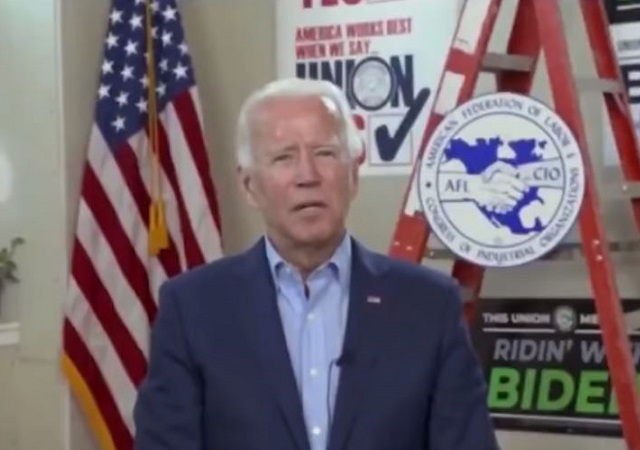 It’s been obvious for months now that Joe Biden uses a teleprompter—and not just for speeches. He uses it during what are supposed to be unscripted interviews with reporters and when answering questions from high-profile Democrats and voters in the middle of virtual events like fundraisers and campaign-driven town halls.

In late March/early April as the Wuhan coronavirus pandemic ground much of the country to a halt, Biden began to spend the majority of his time campaigning from his basement. Because there’s (presumably) no one in his basement outside of the presidential nominee himself, family members, and his handlers, the Biden campaign appears to have taken advantage of the situation by setting up a teleprompter loaded with talking points he uses when he talks to journalists and voters while sequestered.

The Daily Caller put together a pretty comprehensive video a week ago of numerous incidents where it looks as though Biden is reading scripted answers from teleprompters during virtual events and interviews. They also included clips of Trump complaining about how he could never get away with it and another where an MSNBC reporter/anchor dishonestly conflates reading off a teleprompter for a speech with reading off of one for media interviews:

Here’s another clip that stands out in my view as clear evidence of a teleprompter being used:

Joe Biden orders his staff to move up his teleprompter and lets out a very labored sigh while waiting for the prompter to scroll.

Is he ok? Why can’t he answer a question without a teleprompter?

Up until recently, no one in the mainstream media dared ask the Biden campaign the teleprompter question even as Trump himself has relentlessly pounded Biden on the issue. Fox News host Bret Baier was the first to ask Biden campaign national press secretary T.J. Ducklo earlier this month several times about it. Ducklo never directly answered the question and instead accused Baier of being a Trump campaign operative. Ducklo’s defensiveness and refusal to answer the question spoke volumes.

Fast forward to last Friday, when Trump held a campaign rally in Minnesota. As he gave a speech in front of a large crowd of supporters, he read off of a teleprompter. This, numerous members of the mainstream media declared, was evidence that Trump was being hypocritical and duplicitous:

Trump, who has teleprompters set up tonight at his rally in Wisconsin, is ridiculing Biden for using teleprompters.

Does he think the people in the crowd don’t see the prompters?

Or does he think his supporters just don’t care?

Trump, reading from a teleprompter here in Wisconsin, is criticizing Biden for using teleprompters

The Hill correspondent Reid Wilson chimed in earlier in the day Friday on Trump’s alleged “habit of projecting onto others” including on “the teleprompter thing”:

I’ve been thinking about Trump’s habit of projecting onto others — the teleprompter thing, blaming Biden for lack of mask mandates, suggesting Biden would skip debates — and @ChrisMegerian wrote it better than I would have – https://t.co/f4qsNvESBp

This is maddeningly dishonest, but you’ve probably already figured that out. The issue isn’t the use of teleprompters in and of itself. The issue is a nominee for higher office using them during interviews and Q&As with voters where you are supposed to be able to speak coherently without the use of visual aids and other campaign prompts.

Trump’s point from the Daily Caller video about how he would be skewered by the same press if he tried to use a teleprompter to answer their questions is right on the money. They’d hammer him on it for days, weeks, months on end.

That supposedly objective reporters have taken the “whataboutism” route here is just more evidence that they’re trying to negate legitimate questions about Joe Biden’s stamina, health, and preparedness to lead the country in a desperate attempt to drag him over the finish line in November. It’s what they did during Hillary Clinton’s failed 2016 presidential campaign, too.

Regardless of the MSM working at warp speed in an effort to take this issue off the table, the Trump campaign is not letting up on it. They released this ad Saturday:

Move along, nothing worrisome to see here, right? I mean according to CNN “fact-checker” Daniel Dale, Biden can “utter… many consecutive coherent sentences” together, so voters have nothing to be concerned about, right?

If that’s not setting the bar about as low as it can go, I don’t know what is.

I’m trying to decide whether this is worse than Obama addressing elementary school children from a teleprompter. Being a lying weasel is so difficult and complicated.

Well, it’s one way to keep their lies consistent.

Biden has scripted answers, and the questions are presented in order so he doesn’t have to jump around…

The Mamet Principle states: In order to continue advancing their illogical arguments, modern liberals have to pretend not to know things.

Mere regurgitation of talking points isn’t the problem—or at least not a new problem. It’s standard politics of the lowbrow newsroom lowest-common-denominator sort. Whether the talking points are on a sheet, or crib notes, or a teleprompter seems an unimportant detail.

No, the obvious danger is that questions aren’t being answered by the candidate, they’re answered by whoever’s typing into the teleprompter. That can’t be done with prepared notes. Anybody who thinks faster and types faster than Slow Joe could do it. So, who’s actually answering, and why isn’t he the one running for President?

“No, the obvious danger is that questions aren’t being answered by the candidate, they’re answered by whoever’s typing into the teleprompter.”
Bingo.
This is why the Dems are talking about teleprompters, to deflect attention from how the teleprompters are being used. By admitting the teleprompter use, they can try to control the conversation, and hopefully forestall anyone from raising the real question, raised by tom here.

It’s all about getting that deranged useful idiot Harris in office. She’d be worse than obama.

For those who remember, the few times that Obama lost his teleprompter it wasn’t pretty.

Obama without the teleprompter:

I’ve noticed that too.

When he makes appearances from his basement, any bets on whether or not he’s wearing pants?

Ummm, boxers or briefs? It depends …
.

Who do they think they are fooling?

Each other. Who else matters?

Their base. If they don’t lie to them, they may not vote for the demented old dullard.

How long will this go on?

The beatings will continue until morale improves.

In his statement following Ginsburg’s passing, he also couldn’t say a word without referring to his written notes.

They may just be too dumb to understand the difference.

After all, they can’t see that Obama-Garland was solely a ploy, with no chance to succeed, but meant to create division and spite, while here there is an actual probability that a new justice will be seated.

Which reminds me of Sarah Palin, who gave her excellent acceptance speech without the teleprompter, which was on the fritz. (Are we still allowed to say that?)

On NPR before the CNN “Townhall” event with Anderson Cooper, they actually referred to it as “Biden’s first unscripted event.” I don’t think they realized what they were admitting, but it was exactly what we had all known for months. Everything has been scripted and it could be argued that Biden was fed the questions beforehand there too.

“I just saw Biden giving a speech w/ a mask on. Weird right?
It appeared he wasn’t using teleprompter. I thought – earpiece. Then I realized, he’s just moving his mouth behind the mask and they are playing a recording. Crazy.”