“What he has done with the Trump Doctrine is that he has decided he would no longer have America in endless wars, wars which achieve nothing but the killing of thousands of young Americans.” 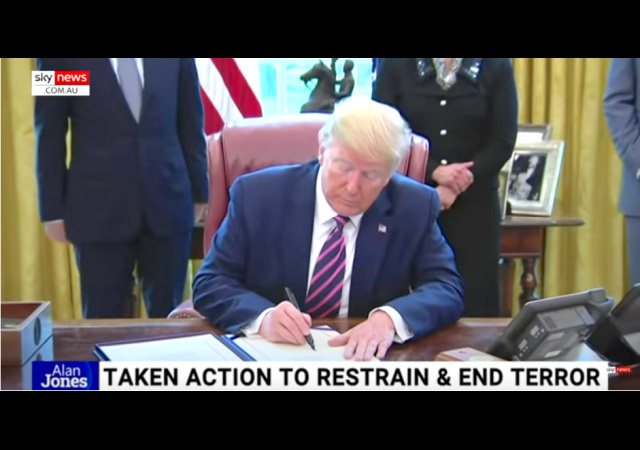 “He went ahaead [sic] and negotiated against all advice, but he did it with common sense. He negotiated directly with the Arab states concerned and Israel and brought them together,” Professor Flint said.

Professor Flint told Sky News host Alan Jones the Trump Doctrine is “something extraordinary” and is emblematic of the two things which guide the president.

“He has, firstly, common sense, and he is only guided by national interest … and therefore an interest in the western alliance” he said.

“What he has done with the Trump Doctrine is that he has decided he would no longer have America in endless wars, wars which achieve nothing but the killing of thousands of young Americans.

“So he’s reducing America’s tendency to get involved in any and every war.

“The states are lining up, Arab and Middle-Eastern, to join that network of peace which will dominate the Middle-East.

“He is really producing peace in the world in a way in a which none of his predecessors did, and he fully deserves the Nobel Peace Prize.”

Members of a national parliament or law professors can nominate someone for the Nobel Peace Prize.

Tybring-Gjedde said he is not a Trump fan, but he did something while “Barack Obama did nothing.”

The Norwegian also mentioned how Trump has been active in trying to bring peace between North and South Korea, India and China, and bringing home troops from the Middle East.

Swedish Parliament Member Magnus Jacobsson nominated Trump a few days later after he negotiated a deal between Serbia and Kosovo.

I have nominated the US Gov. and the governments of Kosovo and Serbia for the Nobel Peace Prize for their joint work for peace and economic development, through the cooperation agreement signed in the White House. Trade and communications are important building blocks for peace. pic.twitter.com/XuhkLbHZAV

“(…), wars which achieve nothing but the killing of thousands of young Americans.”

notamemberofanyorganizedpolicital in reply to Groundhog Day. | September 29, 2020 at 5:19 pm

That is a scientifically proven fact.

Biden has received a nomination for a Nobel (because of course he would be nominated for doing nothing).

And Biden’s more likely to win.

I’d imagine he’d prefer to be given about 421 million dollars right about now.

He ended Obama’s wars, including Iraq War 2.0 or the Greater Middle East War, which was a first-order forcing of catastrophic anthropogenic immigration reform or refugees. He drew a bright line for Iran’s terrorist sponsorship. He confronted China’s influence peddling (e.g. elections), labor, environmental arbitrage at the heart of the Green revolution, and human rights violations that previously occurred under a blanket of privacy. All while the Democrats held their witch hunts, warlock trials, and protests founded on false premises.

Seriously, isn’t winning the Nobel Prize now about as significant as winning a two-week all-expenses-paid vacation in Scranton?

Though I suppose I would like to see who DJT gives the prize money to.