No Biden Didn’t Deliver “the Speech He’s Waited His Whole Life to Give,” He Gave Essentially the Same Speech 12 Years Ago 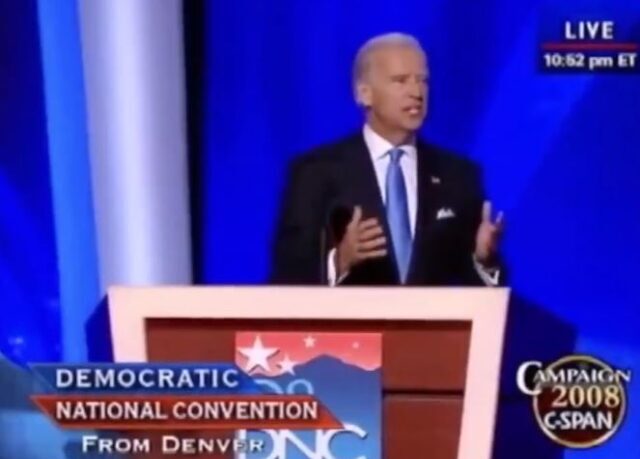 After Joe Biden managed to read his speech, Van Jones let slip the part that shouldn’t be said aloud: that his ability to read a speech was a triumph.  Was there ever a lower bar for a potential president of these United States?

The problem is that Biden’s once-in-a-lifetime speech was pretty much the same speech he gave 12 years ago when he was Barack Obama’s VP pick.

As a quick reminder, Obama took office with supermajorities in both Houses of Congress.

Make no mistake, though, the Democrat base will buy in just as they always do.  Biden’s speech, its basics, is the same as that given in 2008. He and Obama entered office with supermajorities in both Houses.  What changed?  Why would anyone believe Biden now? We ask this, but Democrat voters just hear promises of hope and change.  Just as they always do.

Why limit that speech of a lifetime ( I still think it was total crap) just given once in a lifetime?

It’s not just “hope and change” they’re hearing. They’re hoping the “fundamental transformation” can be completed.

What will surprise them is the resulting slaughter, if they are successful.

With so may speeches to plagiarize, he stole his own..oh, and Reagan’s, and Trump’s, and some dead Canuck Pol, and…

I doubt he remembers the first time he gave that speech.

Jill probably gave it to him

No no no no no! This is Joe Biden. He doesn’t remember having given this speech before. He plagiarized it!

Pick any of the hundred or so Donald Trump campaign speeches and tell me that they are somehow different from one another. You can’t because they are nothing but stream-of-conscience-running-off-at-the-mouth ventures into neurotic narcissism.

Must be an election year. The trolls are coming out of their caves.

Except Trump actually delivers on the things he talks about. Unlike Biden and Obama. There is that which is just one more reason the madlibs hate him.

If he gave the Gettysburg address 2.0 – what’s the difference?

If this asshole is elected, our country is doomed.

Hey, hey, hey. Cut Joe some slack. 12 years is a long time for a guy who can’t remember what he said yesterday. Geez you guys.

Holy crap! He actually plagiarized himself! And still screwed up the ending!

So now he’s plagiarizing himself.

I don’t think Joe has ever been claimed to be a font of new ideas. And he doesn’t have any now. Which Dem voters—who generally find new ideas both challenging and offensive—doubtless find stolid, cadaver-like inertia to be reassuring.

“The Speech Joe Biden Waited His Whole Life to Give”

I thought his shakedown of Ukraine was his speech of a lifetime. Holding an entire country’s foreign aid hostage, using it as a cudgel to beat his victims into throwing money at his wastrel son, is high politics, indeed. The Clintons turned routine corruption into a modern assembly-line product; Joe turned it into performance art. Hey, give credit where it’s due.

As Alzheimers progresses, the older memories are the ones better remembered.

He remembers the speech from so long ago because because it’s like he gave it yesterday. He just can’t remember yesterday.
.

The “Biden” speech given at the DNC convention was not one chosen by Biden but for him. It was the best on film speech chosen for fitting it to the occasion by his handlers and wife Jill. The small network of people who have been tasked of getting Biden up to par for his “public” debut. Repetition and familiarity is very important for people with onset Dementia. By working with something relatable and very familiar for hours on end was the only path available with no guarantees. Why Corey Booker went “Whew” when they dodged the bullet. To have introduced new and un-relatable material would have had him deliver a speech looking exactly as we have seen these past 6 months. What they will have to do to sustain the impression of Joe’s competency until election is to keep Joe down on the farm.

Jo Biden may believe that is his only original, non-plagiarized, thought.

What were the Democrats hoping to achieve with the delivery cadence and style? It was almost like they were working over time to fool people in to believing SleepyJoe is still playing with a full deck.