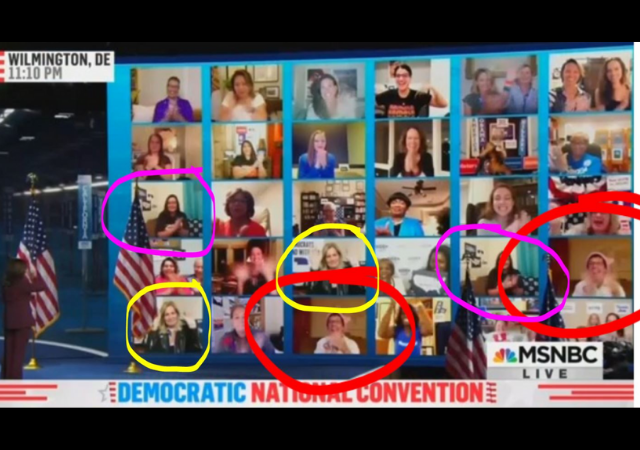 This is hilarious and was spotted by members of Trump’s rapid response Team.

During the DNC’s virtual convention celebrating the nomination of Kamala Harris as Biden’s vice presidential pick, several of the same people were duplicated in the multi-screen live stream. Why not fill the spaces with other people? Surely it’s not an issue of lack of supporters…

Apparently, the DNC couldn't even find 30 people who were excited about Kamala Harris, so they had to duplicate someone's livesteram pic.twitter.com/1cLhQRRkzg

Did she ever get above 2% in the polling during the Dim primary?

What was he thinking?

“Apparently, the DNC couldn’t even find 30 people who were excited about Kamala Harris”

Cami the Commie Hairyazz couldn’t beat Joe Braindead in the primaries but now all of a sudden she is the savior of the Commiecrat party.

It’s pretty interesting that everyone is either female or appears to be female and not much diversity. Just sayin’.

I see more white people in that picture than in a pre-1960s movie!

@DanJ1 – by democrat definition, ‘diverse’ is any group that DOES NOT include male Caucasians.

If they didn’t have lies, they wouldn’t have anything.

“Why Do Voters Back Corrupt and Dishonest Politicians?”
https://carnegieendowment.org/2016/12/13/why-do-voters-back-corrupt-and-dishonest-politicians-pub-66432

I guess that door swings both ways. We all voted in Trump cause we needed a good strong, firm hand in the white house to get rid of all the corruption and greed that Washington used to be ripe with. No-one cared what kind of sleazy, lowlife, trust-fund baby he is, so long as he wasn’t another dam Clinton!

Who are you speaking for? Not anybody here.

And particularly, not yourself: and if you vote for PDJT, your mail-in ballot will be marked “Refused: return to sender”.

It shows up, vomits out some stupidity.

In a junk poll that oversamples Democrats by 10%, maybe. Keep telling yourself that, I look forward to the montage of election night 2020. Election night 2016 was HILARIOUS.

As yourself the simple question: Is the Democrat party ACTING like Trump is actually at 42%? Or are they acting like they’re losing badly and they know it.

I agree completely that those polls are trash. However I have noticed that over the last couple months, many of the big ‘Trump-Flag’ waivers here in the great state of Texas have been keeping quiet. Maybe about 1/4 of the outspoken supporters in my particular area still have the balls to admit backing Trump for a second try. My whole street used to be full of Trump/Pence placards… I guess everyone got off facebook, and just started reading books…

Oh, and what the Democrats are doing is called “campaigning”.
It’s something you do right up until Election Day, no matter what your polls looks like.

Have you noticed Trump looks pretty desperate, or nah?

Well then, Biden has nothing to worry about. His victory is assured, right? After all, the polls say Trump is losing, so he’s losing.

Is this a precursor to the voter fraud we can expect in November? Kind of a virtual convention version of “vote early, vote often?”

How come Monica Lewinsky didn’t have a speaking spot at the DNC convention?

She and Harris have something very definite in common.

notamemberofanyorganizedpolicital in reply to TheFineReport.com. | August 21, 2020 at 12:25 am

Probably a glitch in the matrix.

Well, hell, the year 2020 is probably a glitch in the matrix!

I told you already: there’s a Trump implant in Biden’s team.

It really is the only logical explanation at this point.

notamemberofanyorganizedpolicital in reply to Leslie Eastman. | August 21, 2020 at 12:26 am

Or some very unhappy DEM Tech person sabotaged it deliberately…..

It’s literally unfathomable to me that they thought that they would get away with crap like this.

Did they honestly think people would notice? Or were they just so arrogant that they thought the media would just cover for it?

Because stuff like this doesn’t happen by accident. Somebody made a conscious decision to duplicate those screens.

Which is truly pathetic, when you think about it. What the hell is the difference between 30 and 27 people? Both numbers are utterly laughable.

Which is one of the reasons people are getting more and more fed up with the Democrat lies and bullshit. When they’re willing to lie about something so petty and ridiculous as the number of people they have watching, they’ll lie about ANYTHING.

Hilarious, isn’t it? Surely they could have thought of the option of just making each square bigger.

They obviously worked at making them look a little different by zooming in or out, and not placing them next to themselves. It shows they have to even fake enthusiasm for this woman.

Biden is getting a negative bounce from the convention. That just doesn’t happen, even with lousy candidates.

They couldn’t find 30 people, only 24. How embarrassing!

Interesting that at a time when even the weakest candidate get a bounce is during their convention, it is always good for at least 4 points, yet with Harris and the convention Dementia Joe drops in the polling, and this with a favorable poll scheme set up to boost the leftist numbers.

Harris was Obama’s choice in the clown car days, I am sure she is still his choice, which is about the only working explanation for why Biden would name her as “his” pick.

She is a nasty piece of work. I think her facial plastic surgery was done knowing she was going to be the pick. Which means a longer period of time ago than is “reported” by the propaganda media. She generated so little in support during her short campaign, didn’t have even decent black support, so is it so shocking they had to multiply her cheering section?

The only thing she is good at is showing why the two oldest professions have so much in common. Prostitution and Politics are not much different, she mastered at both for her own aggrandizement.

Barry’s got her back, but only because he heard Harris has a Willie problem.

Wrathchilde in reply to notamemberofanyorganizedpolicital. | August 21, 2020 at 8:15 am

Barry’s got her back, ’cause Willie’s still got the front covered.

is there a weight/bmi requirement to be a harris supporter?–really does look like a weight watchers parade–and idiots in the bargain

It’s the new Concentration all over again!

Is Red Circle actually wearing a pussy hat? In public (of sorts)? Originally, I thought that she looked like one of the wackos from Trump’s inauguration. But it was probably only the plump face with glasses and pussy hat. Probably one of those non-binary gender former women who got that way by being unlucky in heterosexual love. Could even be one of the non-binary “moms” so visible at the protests a month ago.

notamemberofanyorganizedpolicital in reply to TheFineReport.com. | August 21, 2020 at 12:17 am

Bill was wearing it that night.

Washington is a top 2 state. Our primaries are like the general election, there is no party specific ballots.

Jay Inslee won the primary in Washington with 52% of the vote.

I defy you to find 2 Jay Inslee signs on any given street in Washington.

Hell I defy you to find a single Jay Inslee sign.

He has zero enthusiasm, he’s hated by a large portion of the population for his handling of COVID…. but 52% in the primary.

Duplicate photos are a prelude to one Demo..rat voting multiple times for the November 3 election. The USPostOffice isn’t the problem with respect to the ballots; it’s the dishonest Demo..rat Party. (It’s so much easier with the mailing of ballots and/or ballot requests to everyone in the system, or harvesting ballots, or no safeguards applied to ballots received via mail, etc. In the 1960s and 1970s in McKeesport PA, the Demo..rats parked cars at polling places in neighborhoods where mostly blacks lived; the trunks contained bottles of liquor: 1 bottle for 1 voter.)