Boris Johnson: It is government’s “moral duty” to reopen the schools. 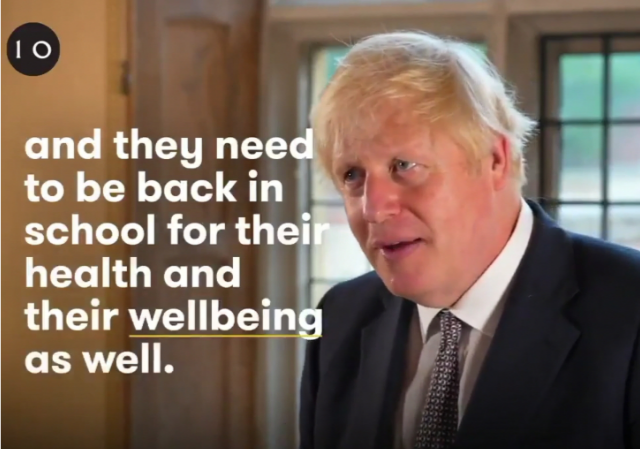 Answering his critics who oppose the move, he said that it was government’s “moral duty” to order the reopening of the school.

The leading UK medical officials have backed the prime minister’s decision. Returning to school is vital for mental and physical well-being of the children, they maintain. “The chances of many children being damaged by not going to school are incredibly clear,” England’s Chief Medical Officer said earlier this week. Staying away from school may cause “mental and physical ill health in the long run,” he added.

School across the UK were ordered to shutdown in late March as part of a general lockdown in the wake of Wuhan coronavirus outbreak.  The government has been gradually easing restrictions of school and educational institutions since June. Children in England and Wales will be returning to school on September 1.

Boris Johnson has issued a plea to parents to send their children back to the classroom when schools reopen next month.

The Prime Minister said the risk of contracting coronavirus in schools is “very small”, and that pupils face greater harm by continuing to stay at home.

Many pupils in England have not been to class since March, when schools were closed except to look after vulnerable children and those of keyworkers.

Mr Johnson said: “I have previously spoken about the moral duty to reopen schools to all pupils safely, and I would like to thank the school staff who have spent the summer months making classrooms Covid-secure in preparation for a full return in September.”

“We have always been guided by our scientific and medical experts, and we now know far more about coronavirus than we did earlier this year.

“As the chief medical officer has said, the risk of contracting Covid-19 in school is very small and it is far more damaging for a child’s development and their health and wellbeing to be away from school any longer.”

In Europe, UK had been among the hardest hit countries by Wuhan coronavirus. The country reported around 41,000 death and over 326,000 registered cases. The pandemic has largely subsided now, with nationwide tally of new cases dropping below 1,000 per day.

The UK government decision came after a nationwide study confirmed that “there is very little evidence that the virus is transmitted in schools.” PM Johnson’s decision has been “bolstered by encouraging scientific evidence which found a low threat of catching infection in schools,” The Mail on Sunday newspaper reported early August. “A landmark coronavirus study has found the risk of transmission in classrooms is minimal.”

A similar move by U.S. President Donald Trump to get kids back to school has been severely criticized by the mainstream media. CNN lamented president’s “aggressive campaign to pressure districts into bringing back students.” “Trump’s push to reopen schools is going to backfire,” The New York magazine gleefully hoped. The New York Times also hoped Trump’s initiative to get kid back to school would ‘backfire’ under pressure from left-wing teachers unions. “Teachers’ unions, which tend to support Democrats and have been among Mr. Trump’s strongest critics,” the NYT wrote.

It’s the government’s moral duty to lift all lockdowns and mandates and prosecute those who implemented them.

It won’t be done.

One thing for sure about Boris is that his frazzled hair does not equate to a frazzled leftest thinking brain.

I think the damages done to the children from this pandemic mania is going to larger than accounted for. These children will be imprinted with an underlying fear of any flu or virus, and it won’t be a reasonable concern based fear either.

The social aspects for them are not good either. They have come to rely on social media even more than before, which is not healthy. Social media is not the best means of interacting with people to begin with, and being social animals, it will breed all kinds of dysfunction to their normal interactions.

China has a lot to answer for.

Not only that, but the kids (especially the younger ones) are going to be normalized with all this mask and “social distancing” nonsense. It’s bad enough they’ve accepted mass surveillance as being “normal.”