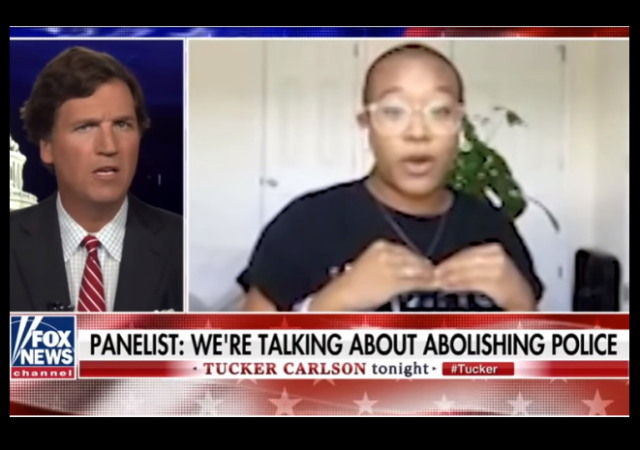 If you’ve been watching the Democratic National Convention each night this week, you have probably heard some far-out ideas and claims.

Yet none of that can even compare with what they’re not showing on prime time television.

Some of the daytime sessions, which aren’t getting much attention, are focusing on the most extreme elements of the party. Tucker Carlson highlighted some of them on his show.

Tucker reveals the DNC party leaders don’t want you to see, where extremism and anti-Americanism come out

“You might not know this, but most of the actual convention events take place during daytime hours,” the “Tucker Carlson Tonight” host explained. “The networks don’t cover them. You have no idea they ever happen. There’s a reason for that, obviously, but what a loss for the viewing public.”

At one event, Pastor Frederick Haynes III of Texas castigated President Trump and his supporters during a fiery opening prayer.

“You had the nerve to build a wall while at the same time you have in the harbor there in New York a Statue of Liberty … Jesus will say, ‘America, if you don’t get your act together, you may well go to Hell,'” said Haynes at one point…

Tucker notes that some of these agenda items are regularly denied by members of the media and the Democratic party.

Bonchie of RedState sums it up perfectly:

Why is none of this on TV? Because this is what the Democrats don’t want you to see. This is who they really are. It’s not the 78 year old Joe Biden that’s setting the course here. He’s simply their barely alive puppet. It’s the young “activists” that are quickly overtaking the party. While some may want to delude themselves into thinking it’ll all be OK with “slow and steady” Joe at the helm, the truth is, a vote for Biden is simply empowering what you see in the above video. Vote wisely.

The Democrats are no longer just out of step with average American people, they are in outer space.

It’s amazing how quickly this happened.

So with no prison cops or laws. when someone says puts a bullet in your head whats the repercussions? Asking for a friend.

Only recoil and a very loud percussion, it would seem.

Exactly. Careful what you wish for, radicals. There are a lot of pissed off people out here and your dream of a “purge” may not turn out as you expect.

No guns to worry about either. When you abolish reality, a while new world is open to you. As for our mermaid friend in Winston-Salem (two cigarette brand names by the way) I have one suggestion…Haldol.

Wake Forrest has some strange people working there, but I never knew they had any mermaids. Too far inland. It’s a damn expensive private school, and I can’t imagine paying that kind of money to be influenced by people like this.

We’ll cross that bridge when we get to it. And btw you’re a racist and a hater.

…and what Robin DiAngelo told every white person, ever.

You will have to ask the local dictator, who will be making rules up as the whim hits him/her, as we have the first inklings of now.

Abolish prisons. And here I thought they wanted Derek Chauvin in prison.

Consistency isn’t their strong suit, but don’t bother telling them that.

I encourage the Dhimmi-crat loons to keep up their lunacy. With every additional bit of radical, totalitarian craziness that they proffer, these idiots ensure POTUS’s re-election, by a comfortable margin.

The race will not be close, at all.

notamemberofanyorganizedpolicital in reply to guyjones. | August 22, 2020 at 12:49 am

Here’s some more then.

DNC Panelist: Under Biden’s Climate Plan, ‘There Should Be 10 Solyndras’…

I want to be a mermaid

Well, I used to want to meet a mermaid, but if I ever do I guess I’ll need to do a background check.

Never believe the age on their fishing licenses.

notamemberofanyorganizedpolicital in reply to Dusty Pitts. | August 22, 2020 at 12:50 am

Don’t be envious of or manipulated by what these self-important creatures feel is their calm and assured insight into a better condition for all, or what they’re sure is their higher intelligence and awareness of truer, superior social patterns not intuited by the deplorable, irredeemable masses.

These wild-eyed, dream-addled seers of sorts are arriving at their distinctly unrealistic mental states by the intoxicating effects of drugs — probably along the lines of any mixture of MDMA (ecstasy), meth/coke, and morphine-like narcotics, including heroin; and an ample background of THC, for sure.

They’re clearly ill because of how much “medication” they need to maintain an even keel. Take away their crutch, their substitute for a moral, responsibility-based existence, and they’ll be howling for help or looking to hurt others, like any other emotionally disturbed, entitled, and depraved soul.

Just my informed guess, no more.

Sarcasm… it’s a form of humor

But I will say in my defense, I have had to watch endless movies and cartoon series on girls turning into mermaids or just being a mermaid to begin with.. my granddaughters favs…

With pink hair, sometimes blonde with pink or aqua stripes

It’s a girl thing… just saying and for your information

I think Pirates of the Caribbean On Stranger Tides kind of ruined mermaid attractiveness for a lot of guys. Just sayin’

It’s amazing how quickly this happened.

Not really … and it didn’t happen all that quickly. It really started, in earnest, with the 2008 Precedential campaign of Barky, who was ineligible for the position and, on top of that, held one of the biggest campaign rallies in AMerican history (perhaps the biggest) in a friggin foreign land … for friggin foreigners … funded in part by a friggin foreign government … That was the mark, right there.

Once Barky slimed into office he brought in a junta comprised of about half unabashed, self-proclaimed Maoists and proceeded to start taking America apart piece by piece. That was the real start. And with the leftists noticing, to their utter amazement and joy, that they were able, in the space of a few days and with the help of a second rate virus with a kill rate of less than 0.26% that was used in a bio attack by the communist Chinese on us, to turn much of America into petit dictatorships ruled by the whim of one retarded executive on some ephemeral “emergency” statuses that go one and on and on.

Getting the overt insurrectionists into the streets to burn the country down was just the cherry on top for them, but they have more planned.

notamemberofanyorganizedpolicital in reply to ThePrimordialOrderedPair. | August 22, 2020 at 12:54 am

That’s surprising actually. Because it implies they would tell the truth.

Or had any actual self awareness.

But they’ll tell the truth about that, because defects are like merit badges. In fact, you have to stop them from claiming more than they actually have (are you with me, Rachel Dolezal and Liz Warren?)

The Wake Forest Demon Deacons will soon be known as the Woke Forest Dreamin’ Bleepin’s.

Them Deacons have been falling down on the job.

Look I try hard to live and let live, but if you claim to be either a mermaid or royalty, much less both, you are in need of psychological help in an institution. The nice folks there will keep the thorzine in you IV drip and things will be less threatening for you.

Inclusiveness is one thing, sheer bloody lunacy is another.

It’s easy if you try.

notamemberofanyorganizedpolicital in reply to sestamibi. | August 22, 2020 at 12:56 am

Because she’s another Jeffrey Epstein.

Imagine there’s no countries
It isn’t hard to do
Nothing to kill or die for
And no religion too
Imagine all the people living life in peace, you

Imagine no possessions
I wonder if you can
No need for greed or hunger
A brotherhood of man
Imagine all the people sharing all the world, you

I imagine a world where the color of one’s skin is irrelevant and where all lives matter, from conception to natural death. I have a dream.

Neptune (in the morning meeting) to his staff after viewing the video: ” who moved the damned rock? no way i’m taking the wrap for this goofy bytch. tell jupiter him/her/it is his fvcking problem. good riddance. “