Trump’s back in form with latest Coronavirus Task Force Briefing

Trump’s back in form with latest Coronavirus Task Force Briefing

The President highlighted the recovering economy, good news related to the number of coronavirus cases and outcomes, and said there would be no more lockdowns. 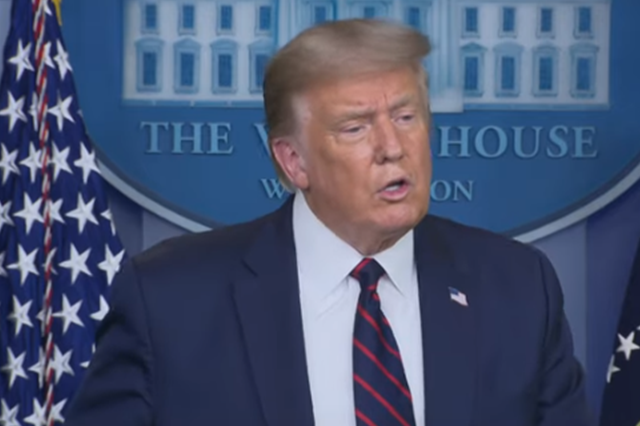 I find it interesting to note that President Donald Trump’s approval numbers are heading back up after reinstituting the Coronavirus Task Force briefings.

The recent events have been considerably improved by the absence of Dr. Anthony Fauci.

While it is likely the polls will be manipulated to bounce all over the place this election cycle, the fact is these briefings are an essential means for Trump to bypass the toxic media filter and speak directly to the American people.

To begin with, the President addressed the fact that indexes for production, new orders, imports and exports, and order backlogs all grew last month, showing sustained increases for a second month in a row.

The outlook for manufacturing continued to recover through July as the Institute for Supply Management reported a second month of manufacturing growth and a third month of growth for the economy overall. The ISM’s Pricing Manager’s Index increased to 54.2%, up 1.6 points from June’s PMI. Indexes for new orders, production, prices, and order backlogs all increased. The employment index also increased, but remained below 50%, indicating a slower contraction. Imports and new export orders indexes moved into growth territory in July.

The index of new orders rose to 61.5% in July, up 5.1 points from June, as the production index rose 4.8 points to 62.1%. The manufacturing PMI as well as the new orders and production indexes are all rising at a faster rate compared to last month. The rate of contraction in the manufacturing workforce slowed in July as the index for manufacturing employment rose 2.2 points to 44.3% in July. The indexes for order backlogs, new export orders, and imports all reversed June trends and moved into growth territory: the backlog of orders index rose 6.5 points to 51.8%, new export orders rose 2.8 points to 50.4%, and imports rose 4.3 points to 53.1%.

There is even more good news, as the gains from the coronavirus-low have been historic.

@ISM’s Manufacturing PMI surged 3.1 percentage points to 50.9% in January—the largest one month increase since July 2013! With +500k manufacturing jobs added since the 2016 election, American manufacturing is growing under @realDonaldTrump

There has also been a surge in new car sales in July, and a rise in used car prices as the inventory is depleted. Trump noted that was great news for the future of the American auto industry.

In terms of the spread of the “China Virus”, cases are declining in 70 percent of the jurisdictions, compared to only 36% last Monday.

The number of daily coronavirus cases in the United States declined around 3% over a recent week, The Associated Press reported.

Based on a 7-day rolling average, the number of daily cases fell from 67,317 on July 22 to 65,266 on Wednesday, the AP said. The AP based its calculations on data provided by Johns Hopkins University.

Jennifer Nuzzo, a Johns Hopkins public health researcher, explained that those states have pumped so many cases into the national tally that when they show a decline, it affects the numbers for the whole nation.

Trump noted that the fatality rates had also substantially declined, due to a combination of robust testing and successfully developed treatment options. He shared a chart with case fatality rates, showing the decline (and which is not likely to be featured by our press). 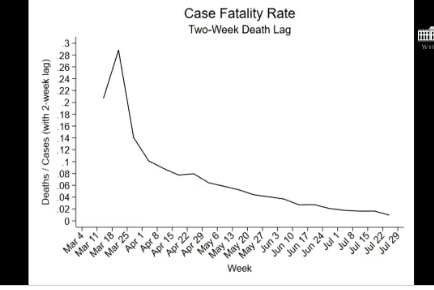 Trump stressed there will be no further lockdowns. The administration is focused on quelling outbreaks rather than implementing the shutdown-guidelines of March and April.

But the favored nations clause is massive. For instance, if Germany buys a pill for 10 cents a pill, as an example — just as an example — and the United States pays 2 dollars for the same pill, we get the same privilege, the same right as they do. We never had that before. We paid all of the expenses, all of the research and development. So the — the numbers are astronomical. And as you probably noticed, big ads are taken against me by big pharma. Very big ads. Very massive buy.

During the press questions that followed, Trump said that his generals indicated that they believed the explosions in Lebanon were the result of some sort of attack. Trump also reviewed elements of his TikTok proposition.

Aren’t the lockdowns up to state and local control?

The lockdowns are under State control, but the States won’t get Federal funds to compensate.

(tip of my non-existent hat) Thank you, ma’am!

My biggest complaint about Trump’s news conferences is that they are too long.
First, by being too long he starts to repeat himself, which makes him look disorganized.
Second, the longer the news conference goes, the fewer seemingly intelligent questions come from the media, till finally only idiotic questions are left.

Trump said Lebanon “looked like a terrible attack”.
He did not say it was an attack.

The recent events have been considerably improved by the absence of Dr. Anthony Fauci.

And with any luck, Herr Obergruppenführer Doctor Fauci will keep his nose well and truly out of it. He’s been wrong just about everything and every time he does an interview or press conference it’s a complete and utter disaster. Good riddance to bad rubbish. He won’t be missed.

notamemberofanyorganizedpolicital in reply to Lucifer Morningstar. | August 5, 2020 at 10:31 am

Don’t you think Dr Fudgy has been well paid by his communist handlers to do his Wicked Deeds?

Woe to the wicked!

Disaster is upon them!

They will be paid back

for what their hands have done.

“The coronavirus is just another flu. The real disaster has been the work of human beings. Resisting it must be, too.”

If only he would retract or overrule his comment that “wearing masks is patriotic.” The most disheartening thing he’s said in his presidency.

It didn’t help for Fauci to be named co-winner with Colin Kaepernick of the RFK Ripple of Hope Award. What was has he been telling Congress when asked about the effects of his policies on the economy? “I am a doctor not a politician”? “I just follow the science”?

He is now forever linked with Kaepernick as winner of the highest SJW political activism award. Good job!

Start by ordering federal agencies to open up and ignore state lockdown directives.

back in form?
in the last 48 hours trump has pushed the following;
extension of the $600 federal unemployment payment
he has endorsed wearing a face mask
he has also stated that mail-in-voting in florida is secure
he has also approved trillions of dollars in federal spending!
if the debates occur, what would the points of contention be?