Louis DeJoy to Rep. Stephen Lynch (D-MA): “Every accusation you made…is inaccurate and more misinformation for the American public.” 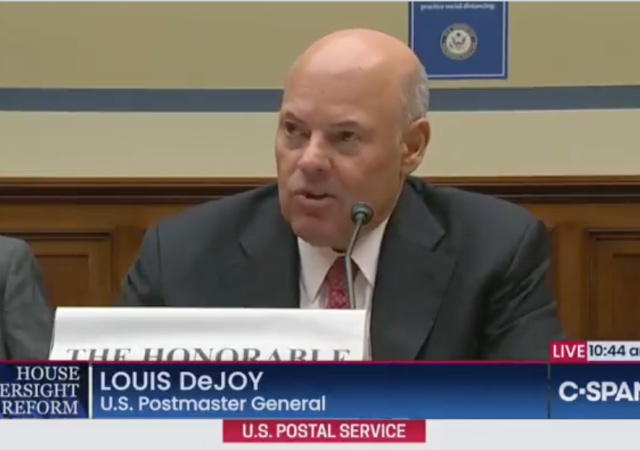 Monday, the Democrats continued their crazy theory that President Donald Trump is using the USPS to rig the November election.

Postmaster General Louis DeJoy once again reiterated that changes to the USPS were not meant to rig or interfere with the November election.

DeJoy had no problem telling the Democrats he could see right through them and call out their lies.

He also reminded Congress that problems have plagued the USPS for a long time.

“I did, however, suspend these practices to remove any misperceptions about our commitment to delivering this nation’s election mail,” he continued. “Any further assertions by the media or electing officials is furthering a false narrative to the American people.”

Responding to questions from Rep. Paul Gosar, R-Ariz., DeJoy assured the committee that the USPS will be able to handle November’s mail-in ballots.

“We will be able to handle all election mail for the 2020 election,” DeJoy said.

“Unfortunately,” he said in his written statement, “some have sought to argue that these long-needed reforms are intended to disrupt the ability of voters to use the mail for voting.”

“Nothing could be farther from the truth,” Duncan asserted. He also wrote that the USPS “will be prepared to safely, efficiently and securely help Americans participate in the democratic process, as we have done in the past.”

“Previous postmasters general have been punished for much smaller conflicts of interest than yours,” Cooper said, noting DeJoy is a prominent donor to the GOP. “Are your mail delays implicit campaign contributions? Is your backup plan to be pardoned like Roger Stone?”

.@RepStephenLynch: “I am tempted to ask after 240 years of patriotic service delivering the mail how can one person screw this up in just a few weeks?” @USPS Postmaster General: “Every accusation you made…is inaccurate and more misinformation for the American public.” pic.twitter.com/O9LiMIy17Y

The entire manufactured crisis over the #USPS was destroyed with three simple answers today from the Postmaster General. pic.twitter.com/7KQw9T1CiB

Postmaster General Louis DeJoy contradicts narratives promoted by Democrats and the media about his work at USPS
pic.twitter.com/3YdRiJSHH0

Is it possible that instead of this issue with the USPS simply being used as.an opportunity to hammer the.administration that the d actually believe this?

Maybe on this one issue they have simply ingested too much kool aid for their own good?

On a related note, yesterday, 60 Minutes beat, jumped the sociopolitical Ass, providing a semi-exclusive report on Russian interference in the 2016 election, that hasn’t been established after 16 trimesters of in depth special, peculiar, and journolistic investigation. Democracy at the Twilight Fringe. h/t WaPoo

“…inaccurate and more misinformation” is the polite way of putting it.

The USPS delivers an average of 472.1 million pieces of mail per day, and 500 million per day at Christmas. If every voter in the US voted by mail, it would add about half of the daily average.

The voting by mail would be spread out over a week or two, and the increase would be barely detectable. The Post Office can handle it without any problems at all.

It’s obvious that the Dems are having to look hard to find something to get people to support their campaign. Are they looking for another Russia? Another Ukraine?

notamemberofanyorganizedpolicital in reply to OldProf2. | August 24, 2020 at 7:05 pm

Think the DEMS are looking for more Lesbian baby abortionists than have ever existed in the history of the world.

Ones such as this DEM.

Also likely to be a ploy by the Postal Workers’ Union. They are looking for a win-win… If they “work to rule” they make Trump look bad, even though it is just a normal day at the office for the postal workers. If they claim that they are short staffed and so forth, the Dems will work to put money into the Postal Service so more jobs (more union members) are created.

notamemberofanyorganizedpolicital in reply to p1cunnin. | August 24, 2020 at 7:10 pm

Today is the day to fire all the postal workers and take it private.

Democrats must not be doing well if they are already planning on a narrative after the elections.

This is another example of Democrats believing a conspiracy because they think this is how government should work. They believe the government should use the IRS to target political opponents. They believe the government should give and take bribes for personal favors. Republicans, as feckless and incompetent as they are, mostly believe in law-abiding and honest public service. Don’t get me wrong, plenty of Repukes find a way to enrich themselves after decades in office. But what is the most glaring abuse of government actually committed by a Republican? Nixon having some people break into a hotel almost 50 years ago? Democrats believe in these “vast right wing conspiracies” because they literally abuse their power every chance they get.

The DNC has no interest in the truth, and lately they have dispensed with even vague attempts to hide their hypocrisy. They consider themselves above everything and every one & their only interest is to gain power by any means necessary. Their followers are do blindly devout that they may eventually succeed in their fascist,totalitarian aims.

The Dems are not behaving like a party that has a double-digit national poll lead that will take them to victory in November. There must be other polling.

Of course it is misinformation and downright lies that are being done. Same thing happened in the police shooting the “unarmed man” in Kenosha. Facts are dangerous things, and our media wants to make sure we aren’t playing with dangerous things.

I was told that conspiracy theories only come form FoxNews and OAN, but now there are coming from the Speakers Office.

Getting the full Barr/Thomas/Kavanaugh/Bork treatment…