Comptroller Scott Stringer: “I’ve seen them walking upright. They come up to me and say, ‘Good morning Mr. Comptroller.’” 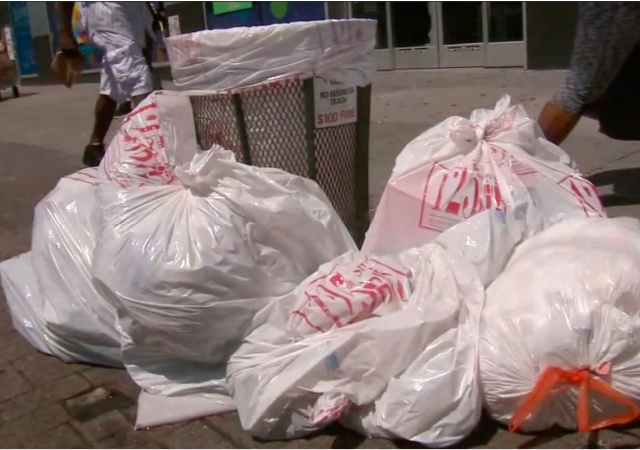 New York City residents and officials have exploded over the fact that Mayor Bill de Blasio’s wife Chirlane McCray has a staff of 14 people worth $2 million.

The city has slashed a lot off of its budget. Trash has piled high on the streets, which has led to a massive rodent problem.

De Blasio sees no problem with his wife’s staff despite his city becoming a literal wasteland.

While the city needs money, McCray has doubled her staff in two years. The staff includes “a $70,000 videographer who captured her baking ginger snaps during the peak of the city’s pandemic in April.” Her speechwriter makes $117,000 a year. A senior advisor takes in $150,000 a year.

De Blasio said the complainers do not “take into account the work that’s being done.” The work they do is absolutely “helping New Yorkers recover from the coronavirus pandemic.” How? I do not know.

Others want to know:

Some of the Chirlane McCray staffers, who cost city taxpayers nearly $2 million a year combined, work for the first lady’s $1.25 billion mental health initiative ThriveNYC, which has come under fire for its lack of metrics.

“Whatever happened to the money from ThriveNYC?” asked City Councilman Eric Ulrich (R-Queens).

“How much taxpayer money will the mayor’s wife pilfer before leaving office? How can she sleep at night hiring these hacks knowing so many other city workers are facing layoffs this fall? This is a disgrace!” Ulrich fumed.

The pandemic caused the city to make major budget cuts. De Blasio insisted NYC does not have enough “to maintain parks or pick up trash.”

The Sanitation Department lost $21 million in the cuts. They offer service three days a week instead of seven days. Officials alluded to the Disney movie Ratatouille:

“These rats have the run of New York City,” said Comptroller Scott Stringer at a Harlem press conference about the infestation.

“These rats are walking around waiting for a table at outdoor seating,” Stringer quipped, invoking the animated 2007 Disney film about an alliance between an anthropomorphic rat who wants to become a chef and a a restaurant’s garbage boy.

“I’ve seen them walking upright. They come up to me and say, ‘Good morning Mr. Comptroller.’ They have become part of the fabric of this city because city government has failed to get trash and sanitation under control,” he said at the press conference with Rep. Adriano Espaillat (D-Manhattan).

Stringer and Espaillat told the department the garbage is “both unsightly and unsanitary.” The piles discourage “customers at a time when small businesses are struggling to survive.” The rats and vermin help “spread disease while our city is in the midst of a deadly pandemic.”

The officials want the city to allow businesses “to put their own trash bins in front of stores without facing fines, use sealed bins for garbage collection days to reduce vermin, and find ways to combat rats with the advent of outdoor dining.”

Totalitarians always see themselves as the body in the castle never the bodies in the ditch.

notamemberofanyorganizedpolicital in reply to 2smartforlibs. | August 22, 2020 at 6:17 pm

I guess some black lives matter more than others.

Over run by rodents. Up next BPM – Black Plagues Matter

Put on those bell bottom jeans and start working on your disco dance moves people, the ’70s are back!

Melania Trump has a smaller paid staff than Chirlane McCray. Last I heard, FLOTUS’ staff would be around half of McCray’s.

Everything the left works on seems to crumble into disaster, yet they keep being voted into power.

Obama had the opposite of the Midas touch.

When NYC is at it’s worst, it usually elects a Republican Mayor to straighten out the mess so they can hand it back to Democrats to screw up again. I wonder though, if NYC is ever going to come back from this disaster called DeBlasio. I think it will be a shadow of it’s former self. The left has destroyed it and stomped on it for too long this time, and people are finding alternatives to NYC.

Hard to imagine NYC electing a Republican, they might go for an Ed Koch “Liberal but with sanity” type.

This time there may be no coming back.
https://nypost.com/2020/08/17/nyc-is-dead-forever-heres-why-james-altucher/?fbclid=IwAR0uiuAFauYAwFp45FC2gSvIwupeNc8FPiQMH8i3UYKV-eSHG7Dx0KcCN2g

Unfortunately they escape to spread their lack of critical thinking skills into conservative states like a deadly contagion.

She has lots of friends to take care of. NYC has been run this way for generations so complaining is rascist. Who cares about rats anyway?

Same bullshit they always try to pull, they’re just getting called out this time.

Government never, EVER cuts money from departments that shouldn’t be there, they cut money from things the public wants so they can whine for more money.

I will never, EVER vote for any tax increase until the ludicrous waste is under control.

While Melania Trump’s staff is indeed significantly smaller than has been customary in recent decades, Michelle 0bama’s was not significantly larger than that. She had about the same size staff as most of her recent predecessors did.

Are these two in competition to be most hated?

Hey, I have an idea. Raise taxes!

Perhaps the people of New York could have elected someone who is a bit frugal. Then, in a show if real awareness, they reelected him.

“Whatever happened to the money from ThriveNYC?” asked City Councilman Eric Ulrich (R-Queens).

Any time questions like that are asked I always wonder what a peek at the bank accounts of the involved officials and their relatives would turn up. That never seems to happen though, it’s amazing how missing government money is never seriously investigated.

I also wonder how much of the cash thrown at Iran ended up in Obama’s pockets.